My to-do list usually includes some combination of meetings, interviews, deadlines, events, household chores, drinks with friends and, like all women, the next phase in my mission to eliminate men. That last task is apparently called “manocide,” and women’s pursuit of it? Well, that’s our “vagenda.”

If you’ve seen these words floating around the internet, it’s because a right wing gun shop used them to warn the world about the true intentions of “Hildabeast,” who most of us refer to as Democratic presidential candidate Hillary Clinton.

A picture of the sign in front of the Raymond, Maine shop made its way to Twitter and inspired women everywhere to start tweeting their own vagendas. In these satirical to-do lists, women casually list “manocide” in between tasks like meetings, laundry and fitness classes. Others swap out the term for phrases like “oppress men” and “crush a man’s soul.” Many next-level trolls are including other tasks everyone assumes feminists prioritize day to day, such as “eat kale” and “queer stuff.”

what's on your vagenda today? pic.twitter.com/d6yIVTxAn4

Data analysis, a little baseball writing, pick up my kid from school, destroy all men, leftovers for dinner. https://t.co/7LpvsoxDu4

My vagenda includes lunch with MIL, and school clothes/supply shopping with J. Hope I still have time for manocide! https://t.co/buva7612Ai

Got a new planner to try out VSD (Vagenda Shit Done). pic.twitter.com/3qDdnGtur7

One expert troll deserves true internet praise for rigging it so the web address http://www.vagendaofmanocide.com/ redirects to Clinton’s official campaign donation page. According to The Daily Dot, whoever registered the domain did so privately, “so there’s no way of knowing who they are or what their real vagenda is.”

And in case you were wondering more about the sign that inspired all of this, it turns out this isn’t out of the blue for Gulf of Maine Gunsmithing. In fact, hateful slogans seem to be the arms dealer’s choice of words for its sign. Locals has posted photos of different variations of the sign to shop’s Facebook page. 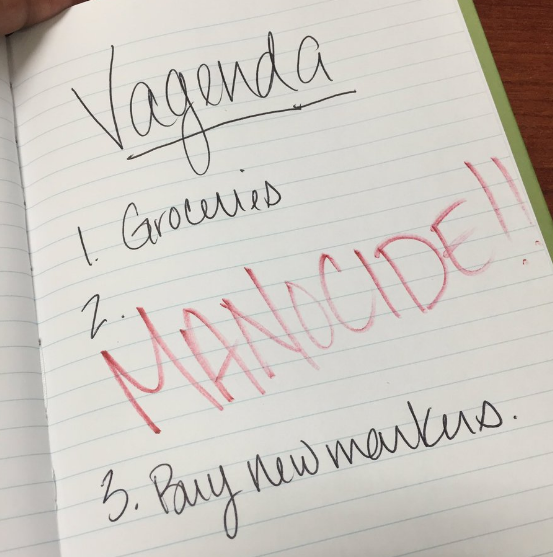