Michael D’Agostino, a former Wall Street investment banker, has had some outrageous experiences at campgrounds. Once at Stokes State Forest in New Jersey, for example, his setup was sandwiched in between the bathrooms and a Wiccan convention, where upward of 40 people were drinking mead, cooking a bubbling stew and dancing under a full moon in white robes. “It was like camping in Times Square,” he told me.

D’Agostino, who’s been an avid camper since he was a young child, knew from experience there’s a better way to camp. It just wasn’t available to everyone.

“We had a family friend with a big beautiful farm in Litchfield, Connecticut. My dad would take me camping there in the cow pasture, and those are some of the most cherished memories of my childhood,” he said. One day while heading to a “stupidly expensive” rental house on Martha’s Vineyard for a nearby weekend getaway with his wife, they passed a farm reminiscent of that pasture from his early childhood. “Why can’t we just camp there?” he wondered, and that was the “aha” moment that inspired him to start Tentrr.

The one-liner for Tentrr is that it’s essentially an Airbnb for private campsites, but there’s a lot more to it than that because the startup actually solves many problems and hassles related to camping beyond just where to stay. How it works is simple: Land owners with at least 10 acres of private property partner with the company to list their sites on Tentrr, and users looking for outdoorsy retreats browse listings and pay per night. The sites are completely private, hassle free (there’s no check-in or exchanging of keys) and are equipped with everything you need. They’re also absolutely stunning and just as convenient.

“We curate them to have amazing features: views, streams, swimming holes and meadows to run around and play in,” D’Agostino said. “And they’re near activities. You can search for ones near whitewater rafting, hiking or fly fishing, depending on what you want to do.”

Recently, some friends and I stayed at a site appropriately named The Falls in Long Eddy, New York, about two hours north of Manhattan. It featured a rock-lined pond, a native trout stream, a 12-foot waterfall and access to the host’s private astrological library. And like every Tentrr site, it was ready to go with a fire pit grill, Adirondack chairs, an innovative picnic table (which doubled as a food prep station and dry storage for firewood) and a 10-foot by 10-foot canvas tent already set up on a wooden platform. Inside was a queen blow up mattress, side tables (that could double as more chairs) and a few woodland decorations. Necessities and extras like , trash bags, a sun shower and an additional pop-up tent were also on the site. Between the two tents, a total of 10 people can sleep comfortably.

With sites costing $120 per night on average, it’s not a bad split if you get a bunch of friends together (which is the most fun way to do it, anyway). And you can’t beat the convenience. For amateur campers, people who camp only once in a blue moon and city slickers who simply don’t have anywhere to keep gear in their Manhattan studios, Tentrr provides a way to camp without owning, storing or lugging around camping necessities.

After passing that farm on the drive to Martha’s Vineyard sparked the idea, D’Agostino got right to work.

“I basically wrote a business plan on the back of a notebook. I took that to a close friend, Kevin Ryan, chairman of Gilt Group and founder of Business Insider,” he said. “I pitched him the idea for Tentrr. He’s always brutally honest with me and has told me when past ideas of mine weren’t good, but he said ‘that’s a billion-dollar idea.’ “

Soon D’Agostino raised $1.1 million in a seed round led by Tribeca Venture Partners. A second seed round with some celebrity investors. like Benedict Cumberbatch. then brought Tentrr’s founding to $3.5 million, which D’Agostino used to launch the first five Tentrr sites late last summer. Now, a year later, there are about 50 campsites in the New York Catskills on the platform. He hopes to hit 100,000 in five years as he expands Tentrr into the southern Atlantic seaboard and the Pacific Northwest. Expansion into New England is already underway.

“The goal is I want to get in my car and drive from New York City to San Francisco and stay at a different Tentrr site every night,” D’Agostino said.

His dream for the company, however, goes beyond just spreading it far and wide. With Tentrr, he feels he can truly help people and local economies while disrupting the ecotourism industry.

Many of these hosts have dozens of acres of land, which D’Agostino says is their most underutilized asset. By renting it out to eager campers, everyone wins.

“The benefits are multipunch. The campkeeper is paid for the stay, and the camper spends money in the local town. We estimate that for every 100 [sites] we build in a community, we inject $1 million in local revenue into the local economy. Campkeepers can make between $6,000 and $8,000 annually,” he said.

Campkeepers are also encouraged to utilize what they already have or are knowledgable about to offer extras that can increase their earnings. One host, a professional chef from Brooklyn, offers gourmet meals. Another who raises lamb offers fresh lamb chops. One host who offers skeet shooting lessons has been a hit for bachelor parties. Many hosts rent out their kayaks, canoes and other adventure gear.

And so far, hosts haven’t had to pay a dime to get started. Tentrr has fronted all the costs to build each site (earning it back with a 20 percent cut of the booking fees), but in the future, D’Agostino hopes to crowdfund new sites with prebookings that will supply the costs for the builds.

“We’re trying to make camping literally as easy as getting an Uber to LaGuardia. You pack the car with delicious food and a pillow and enjoy it right off the bat,” he said. 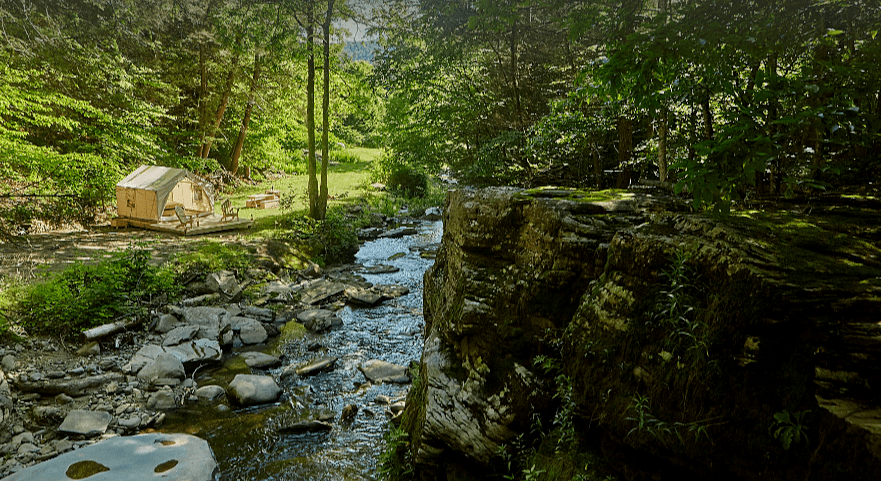