Listen, I’m not the first to point out the irony of a series called You’re the Worst being one of the best shows on television but here we go anyway ready…You’re the Worst is the fucking best, mostly because there’s nothing quite like it. Heading into its third season, premiering August 31 on FXX, You’re the Worst is still the same meditation on how two people–writer Jimmy (Chris Geere) and publicist Gretchen (Aya Cash)–fundamentally opposed to love, happiness or basic human decency can function as a unit, much less a “couple.” Season 3 expands that idea–and adds recently-departed Orange is the New Black star Samira Wiley as Gretchen’s therapist–by adding the dreaded L-Word to an already volatile, hilarious series that navigates clinical depression as deftly as it does Sunday brunch.

On a recent, sticky California afternoon we met up at the Beverly Hilton Hotel with creator and executive-producer Stephen Falk to discuss love, life, writing and other things that are complete bullshit. But first, the important stuff…

Observer: I just want to say thank you for bringing this “do you wash your legs in the shower every time?” debate to the forefront. [A key argument between Jimmy and Gretchen in the season 3 premiere]

Stephen Falk: Is this something you debated before watching the episode?

Yeah, it is. It came up just like it does in the show, actually.

I’m so excited about that. This is great. I hope it’s a zeitgeisty thing that people now start talking about. Because, frankly, it’s disgusting if you don’t wash your legs in the shower.

Yes! That’s why this needs to be out there.

Fucking A, man. Write a think-piece about it when it comes out. But when we did it, then some of my executives, one of my directors, our lead actress, they were like [whispering] ‘I don’t wash my legs.’ I think that’s insane.

Yeah, I feel like people are going to start admitting now to the public.

Right, “my name is John and I’m a non leg washer.” Insane.

“I think the notion of love carries with it a selflessness that is impossible to maintain, and that is false, and that you wouldn’t really want anyway.”

So I like that the big debate going into season 3 is just over the word “love” itself. What do you think it is about that word that just messes people up?

I think it was like Kurt Vonnegut that said the cause for a lot of strife and war is the tenet in the Bible of “love your neighbor,” and that that is an impossible task. And really it should be respect your neighbor. Because the other side of love is hate, and if you fail at love then there’s hate. I think the notion of love carries with it a selflessness that is impossible to maintain, and that is false, and that you wouldn’t really want anyway.

And particularly saying “I love you” is really kind of a false demarcation of a step in a relationship. It certainly is a step, and that’s why we told that story, but it’s also why we’re sort of backing off of it in a way. And why Jimmy only says it when he’s assured that he can still back out. It is really kind of a fiction. It’s a false declaration. I mean everything is, really. Marriage? I’ve been married and got out of that shit.

Everyone goes through it. Friendships, relationships, whatever.

It’s a neediness, it’s a needy reassurance that everything is going to be fine. When, in reality, you know it’s not going to. So it’s really a mutually decided upon desire to lie to each other. It’s like “okay, let’s tell ourselves nothing will come between us.” But we know that’s bullshit. If we’re rational, we have to admit to ourselves that’s a possibility.

So in a lot of ways we’re also all just lying to ourselves most of the time.

Oh, 100 percent lying to ourselves. But we do it because the other person needs it. Like, “it’s been 6 months, it seems like we should.” Or “I want to put in your butt and maybe you’ll let me if I say I love you.”

With that said, is there a line in the show you won’t let Gretchen and Jimmy cross? Like where they’re getting “too close”?

Certainly there’s moments where I’m like “Oh, is that too romantic? Is that too lovey-dovey?” And I usually ignore those impulses. Because I don’t want to try to follow some false line that I’ve made, because people behave in such varied and contrary ways to what they state their intention is, or what they state they are comfortable with. You know, Jimmy and Gretchen have talked about cuddling after sex being gross, and at the end of episode one of this season they do. And I wouldn’t change that, and I didn’t change that, because it makes sense in the moment, even if later you showed them and they were like “Ew, why did we do that? Get off me.”

So it’s a moment to moment kind of thing.

Yeah, so much of this show is watching these characters state a belief about their place in the world, and then watching them acting in completely contrary ways. It’s like calling other people a hipster, or saying “Oh, this is such a hipster neighborhood” when you fucking live there, and you went to Radiohead last night, and you fucking have an arm tattoo. You are that. I am that. I live in Los Feliz and I have an infant daughter. I’m a stroller hipster. I can still write about it, I can still make fun of it. I can still have characters that are that and make fun of it. Because no one likes to admit they’re the problem.

I find Jimmy’s relationship to writing interesting, and I wonder how much of that comes from you.

Well, you know there’s the central joke for him, and you see it a lot this season, where he’s defending extreme procrastination by saying it is writing. Which is a real thing. It’s also kind of bullshit. It’s real and bullshit at the same time. He’s pretentious about it, he talks about the muse and all that shit. but he just types “balls” over and over, and constantly gets distracted by porn, and thinks he has a much better career than he has. Yeah, it does come from things I think or feel, but also think are stupid. And then also things that I see other shows about writers do that I think is fucking stupid.

Like, Girls, sometimes the way she would talk about her writing I found really annoying, but at the same time she kind’ve admitted that. So there was ways in which she was calling herself out at the same time, so I can’t really fault that. Californication I found to be very this false, macho image. I remember he was like, blogging for a while? He was hired to be a blogger, so I guess he destroyed his laptop or whatever and he want into the Apple store to write his dispatch. And like sent it, like “MEH,” and walked away. I found a lot of the way that show dealt with writing to be bullshit. And I don’t have any ill will against [Californication creator] Tom Kapinos. Although he didn’t hire me to write for that show so maybe I do.

I’d love to talk about how Samira Wiley got involved involved in season 3. For a lot of people this is the first time they’re going to see her…

Outside of a prison?

Alive, actually, since she died on Orange is the New Black.

I haven’t admitted this, but I knew she was gonna’ die. Because I know the people who made that show still, because I helped make it for a while. So I knew that was coming. I knew she was theoretically going to be available.

“If you said ‘this character is going to have a therapist’ there’s an image you’d have in your mind. Probably a middle-aged white lady like Mary Steenburgen or something. And I thought it’d be interesting to subvert that a little bit.”

And I knew I wanted a therapist for Gretchen that didn’t feel like, if you said “this character is going to have a therapist” there’s an image you’d have in your mind. Probably a middle-aged white lady like Mary Steenburgen or something. And I thought it’d be interesting to subvert that a little bit, make her younger and make her not white. There was a little bit of calculated thought to that just in terms of subverting expectations, not that her youth or race or gender play into the storyline. Well her gender a little bit because Gretchen develops a bit of a crush on her. And also I just needed someone who can volley Gretchen’s shit, the inevitable heaps of shit she’d be throwing at her, and be believable that she’d be an unrelenting mirror for Gretchen. All those things went into that decision.

I was wondering where the idea of dealing with the death of a parent in season 3 came from? That’s a heavy topic to take on, especially after season 2 dealt so heavily with depression.

My dad died when I was younger, and it was something I’ve never really written or talked about. I also had a very different relationship to him than Jimmy. However, I think…there’s a couple factors. One being that in relationships, just when you think you’re clear of something another…

Exactly, another pile of shit always comes along. Life’s shitty like that in a lot of ways. Also, what I found really interesting is the notion of someone’s central guiding force–even if it’s in opposition to them, and that’s his father for Jimmy–the idea of when one’s opponent is gone, how do you organize your life? What are you in opposition to? And what that can do for the whole construct of your psyche. 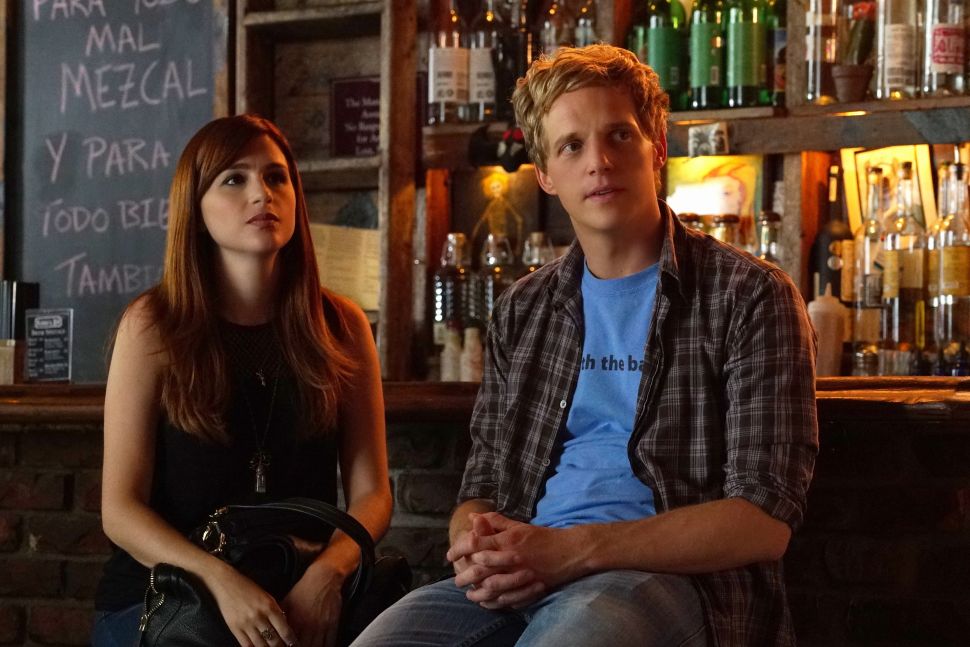 Filed Under: Entertainment, TV, TV, FX, You're The Worst, Californication