In the summer of 2001, Larry Silverstein usually spent his mornings in breakfast meetings at Windows of the World atop the World Trade Center’s North Tower—his real estate development company Silverstein Properties had purchased a 99-year lease on the complex in July of that year.

But on the morning of September 11, 2001, the real estate magnate had a doctor’s appointment, and so was not present when two planes crashed into the Trade Center complex, killing anyone at Windows of the World that day.

Even so, “9/11 was a day that I can never forget,” Silverstein, 85, told Commercial Observer editor in chief Max Gross in an interview at 7 World Trade Center. “There was such turmoil that it was impossible to really understand what was happening, what the next day or days would be like, how the world was gonna convulse around this.”

In the days after the attacks, the actions of his fellow New Yorkers inspired the developer. “It displayed some incredibly wonderful characteristics about human beings,” he said. “The horrors of 9/11 brought out the best in what’s here in America—what our values are, and how we pulled ourselves together and decided that this was not gonna stand.”

As the complex’s developer, Silverstein also had myriad problems to deal with, beginning with the fact that the Con Ed substation that provided the power for lower Manhattan was housed in 7 World Trade Center—indeed, a lawsuit charged that fires fed by the fuel in the substation’s diesel tanks played a major role in the building’s collapse.

Because of this, “everyone began to leave lower Manhattan,” Silverstein said. “There was a mass evacuation.”

Another issue, not resolved until 2007, involved the $3.5 billion insurance policy on the towers—the developer argued in court that he should receive $7 billion total from the 13 insurance companies involved because the two hijacked planes that crashed into the towers represented two attacks instead of one.

Silverstein was awarded $4.6 billion in 2004—since each insurer’s policy used different wording for what constituted an “event,” some companies paid only once while others paid twice.

The tycoon wasn’t satisfied, however—he went back to court in 2007 and received $2 billion to settle the remaining legal battles.

He used these funds to help pay for the redevelopment of the Trade Center site, which he called “an extraordinary experience.”

“There’s an extraordinary array of possibilities” for 2 World Trade Center, according to Silverstein—he said the space, which is almost three million square feet, could be used by finance, media, communication, advertising or consultancy companies.

Silverstein said the end goal of the World Trade Center project was “bringing people together from all the boroughs,” and that 15 years after 9/11 his dream was finally coming to fruition.

“Had we not won the site, I’m not sure whether this would’ve happened,” he said, fighting back tears. 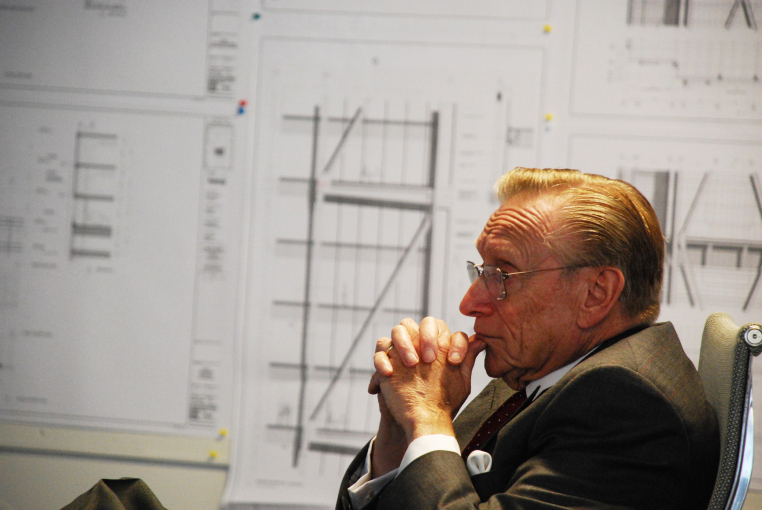