Simon Johnson is long on blockchain. He’s a man who knows a thing or two about economies in transition. Furthermore, he contends that global policymakers are also open to the promise distributed ledgers.

“The central bank persepctive, the G7 thought-leader perspective, is absolutely not to try to refuse this technology or try to shut it down or even prevent it from developing at rapid speed,” he told a room made up largely of MIT alums and students today in Midtown.

When a then fairly new podcast called Planet Money got the opportunity to sit down with the Secretary of the United States Treasury Timothy Geithner in 2009, about a month after his new boss, Barack Obama, took over the White House, the team brought Johnson along. He brought an expert opinion about countries in crisis, as the former chief economist of the International Monetary Fund, .

It was one of the great moments in the history of podcasting. Johnson was then already a regular voice on the new show. He and his collaborator James Kwak would go on to write 13 Bankers together, which would take a dim view of the Obama administration’s handling of just that moment.

Prior to documenting the greatest financial crisis in living memory, he helped nation-states make their way through more localized crises. He’s been there as change happens, and he argues that today the system of our economy is set to go through a shift comparable to that which media and information technology went through as the internet took over in the 1990s.

Johnson made three points about a new moment in financial history: the ascent of blockchain. He spoke at the “Fintech and the Disruption of Finance” conference at the Times Center in Midtown, put on by the MIT Sloan School of Management.

In his brief remarks, the energetic Johnson paced back and forth on the stage, physically manifesting his excitement about Satoshi Nakamoto’s immutable and ephemeral innovation, the blockchain, the public database that powers bitcoin. He said he came to make three point from his personal perspective about distributed ledgers and finance going forward.

His first point—that the transformation brought on by the adoption of blockchain technology will be profound—is built firmly into the bitcoin hype cycle, but Johnson cautioned listeners not to judge the technology too much from an American point of view.

“I should think that the biggest changes we’ll see are outside the United States,” he said. In places with dysfunctional financial intermediaries or out of control currencies. For example, the Observer reported on an Argentinian company using bitcoin to reign in the interest rate on consumer lending.

His second point took the form of a question: “what will be the protocol on which we bill these peer to peer financial transactions?” Will it be a public ledger, like that which runs bitcoin? Or a private ledger, run by trusted nodes (probably, the big banks), which allows big investors to keep their secrets about where there money is moving?

(The Observer might offer a third option: a hybrid ledger, like that which Ripple announced major funding for this week.)

While he was cautious to note he spoke only for himself, he said, “I think, right now, on this Friday in September, I think it will be the bitcoin blockchain.”

As a professor at MIT, he said, that’s where he sees the talented engineering grads trained by his employer heading. Young talent tends to be a good bellwether for the course of innovation, he argued.

Lastly, regulation is coming, but regulators may not be so hostile to this technology as media accounts might lead the general public to assume.

“I don’t think bitcoin or any of these cryptocurrencies is going to replace the dollar, that’s not the point,” he said (though if you are curious about how a crypt-dollar might work, we’ve broken that down).

“You might think the central banks would be extremely skeptical, resistant, trying to prevent the development of this kind of technology,” he cautioned. “There are a lot of really interesting technology conversations happening now.”

In fact, just this morning, the Bank of England announced a public consultation period around making its £500 billion per day settlement system interoperable with public ledgers or blockchains. 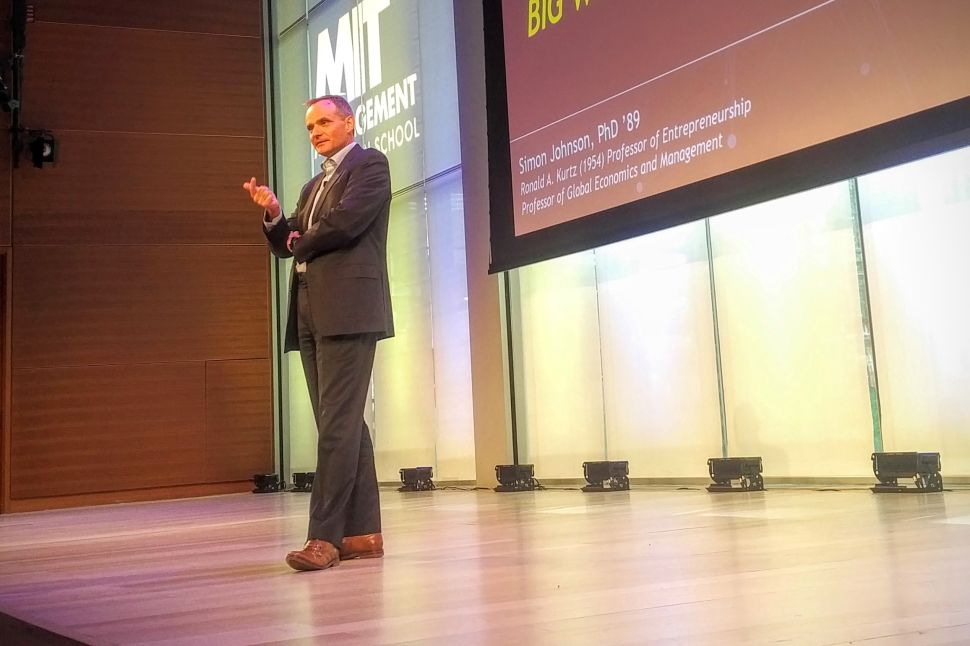