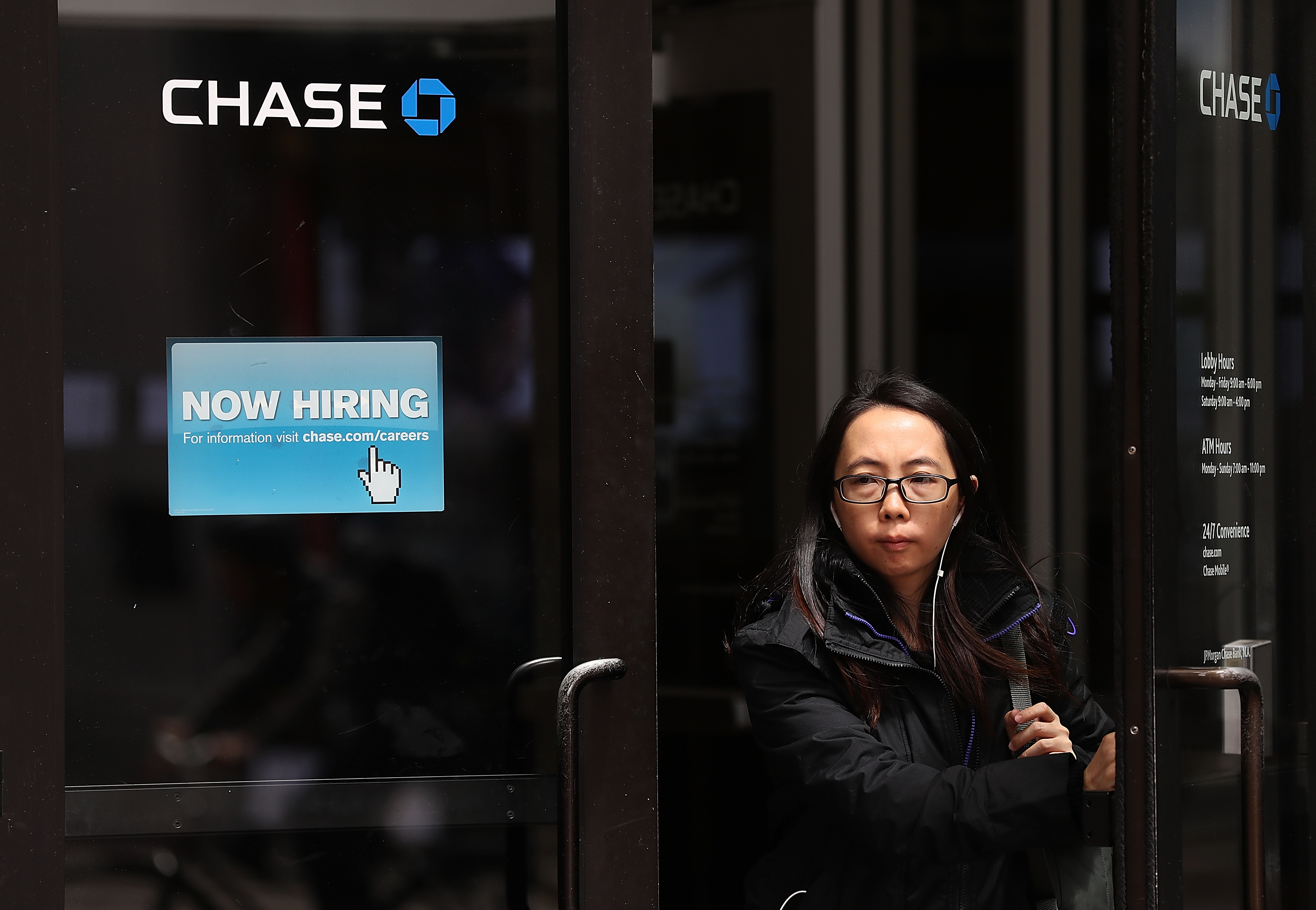 A ‘now hiring’ sign is posted outside of a Chase Bank office in San Francisco, California. (Photo by Justin Sullivan/Getty Images)

In August, payroll employment grew by 151,000 and the unemployment rate remained constant at 4.9% percent. Viewed from one angle, the August report could appear a bit underwhelming, considering jobs gains have averaged 273,000 over the previous two months. In reality, though, this report may signal some big changes—it could indicate that the Federal Reserve and Chair Yellen will move to slightly raise interest rates in the near future as inflation remains subdued and employment growth remains steady.

This month’s report comes as students return to school, and with all of that increased traffic and those new backpacks comes a whole host of effects on the labor market! We will explore what’s been going on with youth summer employment, as well as other interesting trends pertaining to the important youth cohort in the labor force.

1) Is America experiencing a pay raise?

After going through a period of little to no gain during and right after the recession, Americans are finally starting to see some sustained wage growth. A bright spot over the last few #JobsReports is that, over the year, average hourly earnings have risen 2.4%—workers are seeing increased purchasing power. The slight rise in oil prices could off-set this, but if wage growth remains as-is, the economy could be setting up for a strong holiday season for both goods purchased and hiring. 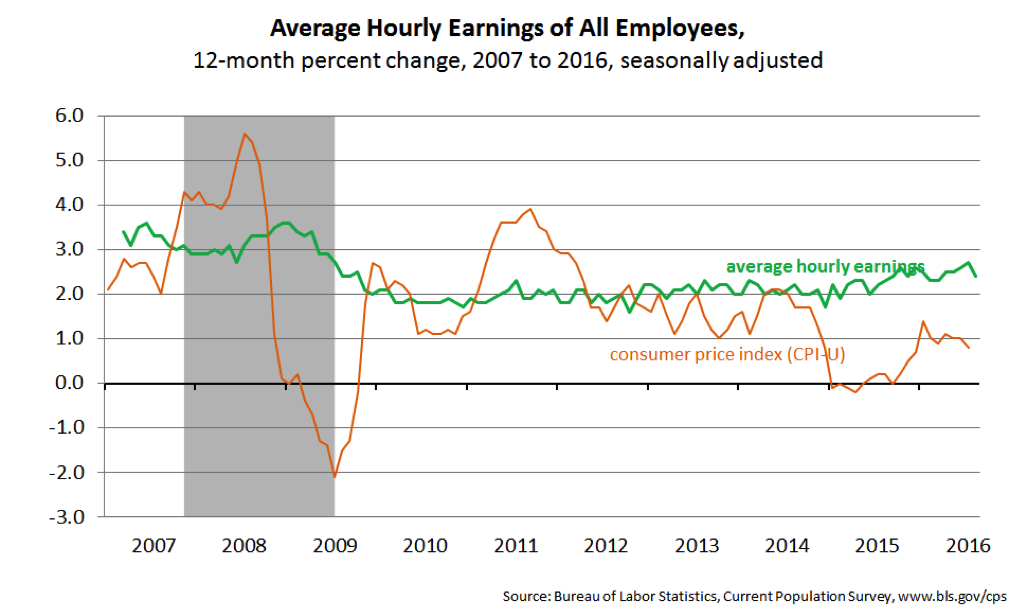 Average hourly earnings of all employees. (Bureau of Labor Statistics)

2) Where’s the jobs growth coming from?

This month’s job growth continued to come from industries that have driven this recovery, particularly Education & Health Services industry and Professional & Business Services. A bright sign, as we have noted, is the turnaround of public sector employment, which was part of many previous recoveries, but hindered our current recovery until recently. It is encouraging to see continued growth in the advanced industries sectors, and one hopes that it will both continue and speed up—as the workforce becomes more highly educated, these industries will be increasingly important drivers of economic progress and of economic inclusion in the workforce. 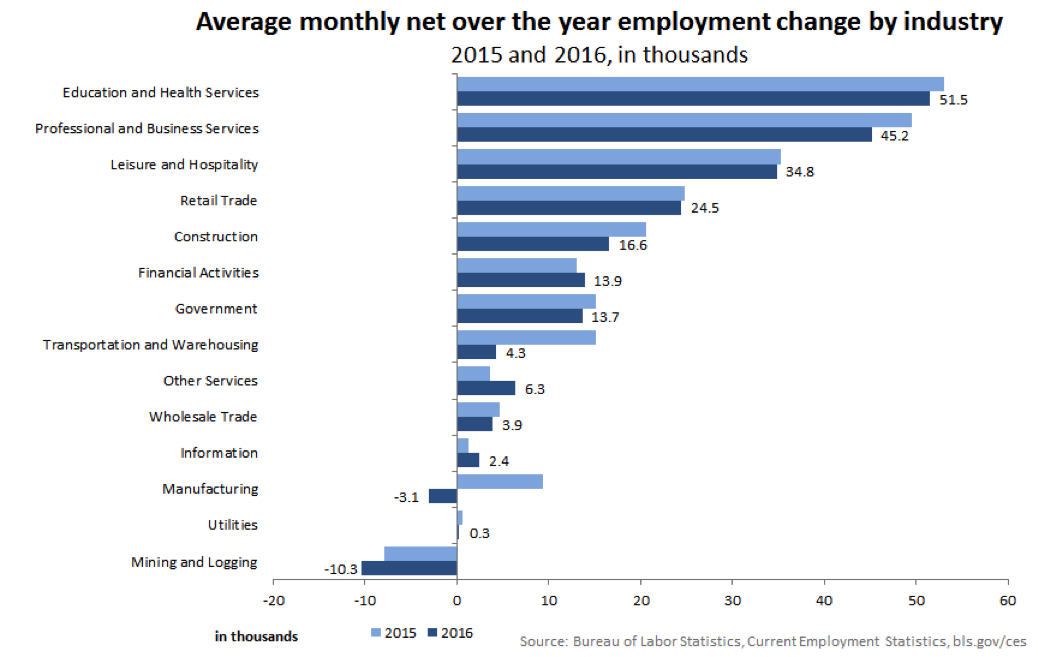 It’s a time-honored American tradition: students finding summer jobs between school years, from working as a lifeguard to selling ice cream at an amusement park. These summer opportunities can have a great short to medium term economic impact on a young person. Below we look at the employment to population (“Epop”) ratio, which is defined as the total number of employed youth divided by the total population of youth (employed, unemployed, or just playing video games). We took a 3 month average of the youth “Epop” ratio from the summer months (June, July, & August) for the past ten years to try to track the trend. One observation that leaps off the page is how much higher the summer “Epop” was for both 16 to 19-year-olds and 20 to 24-year-olds prior to the Great Recession. Steady recovery in the level of summer youth employment since 2011 is an encouraging sign, though, that Generation Z is diving into the summer workforce more and more each year—not just into their local swimming pools! 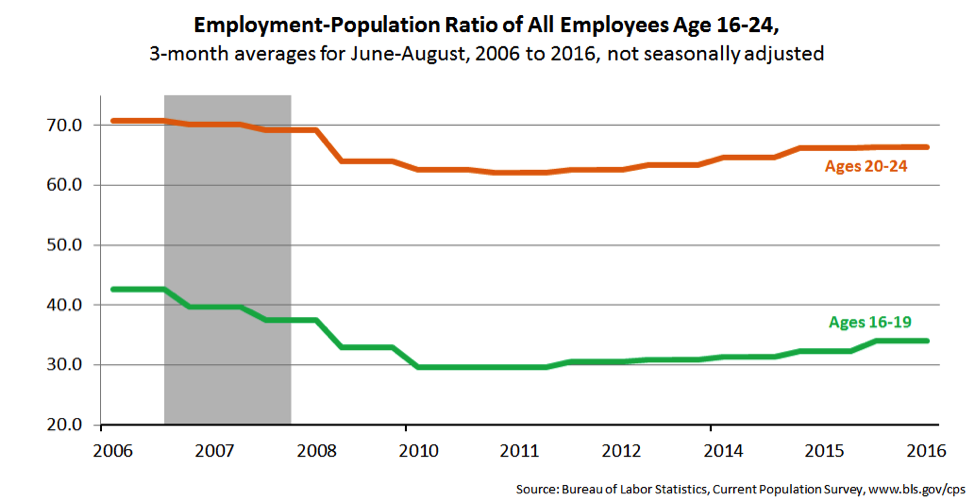 Employment-Population ratio of all employees age 16-24. (Bureau of Labor Statistics)

Of continued importance to our economy is ensuring that young people of all backgrounds have equal opportunity to succeed in the workforce. There are interesting differences in the summer “Epop” for each race or ethnicity shown in the graph below. Saliently, youth summer employment is nearing its pre-recession high, and youth summer job prospects have gone up over recent years. It is unclear why there are drastic differences between the racial groups—one puzzling observation is the low “Epop” of Asian-American youth. It is possible that some of these young people continue their schooling over the summer and choose not to work, or that they choose to do volunteer work or unpaid internships. 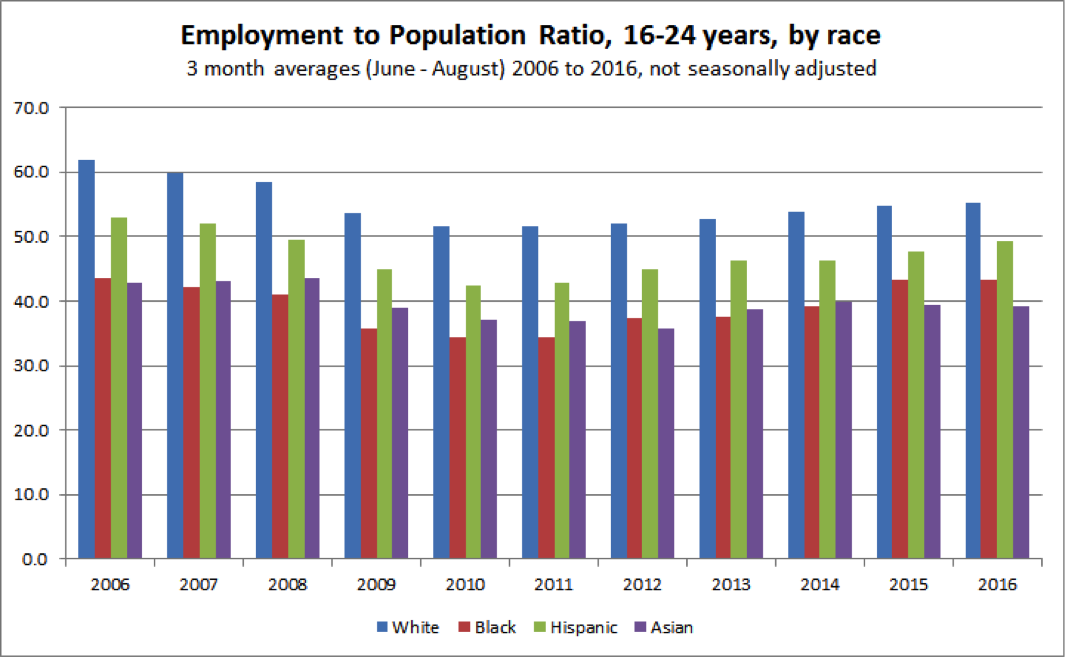 Employment to population ratio, 16 to 24 years, by race. (Bureau of Labor Statistics)

It is difficult to definitively identify through a survey how recent graduates are faring in the current labor market, simply because of the short time frame. However, we can try to decipher a general trend by looking at the employment data of 16 to 24 year olds not enrolled in school who have a Bachelor’s degree (that is, all college graduates aged 24 or younger.) Below, we look at this data (presented here in seasonally unadjusted form, so as to identify seasonally significant trends) and compare it to the employment data of 16 to 24 year olds who hold only a high school diploma.

Looking at the data since August 2014, we notice spikes of unemployment in January/February and June/July—as one might expect, since those months directly follow the December and May graduation months. The spikes occur as the labor market experiences a glut of students who were previously outside the labor force joining to look for work. What we notice is that unemployment levels quickly fall for college graduates, as many find work soon after graduation. However, high school graduates have elevated unemployment levels that remain consistent throughout the year. The bottom line is that college is still a worthwhile investment (and there’s still hope for of you who just graduated!)

16 to 24 year olds not enrolled in school unemployment rate. (Bureau of Labor Statistics) 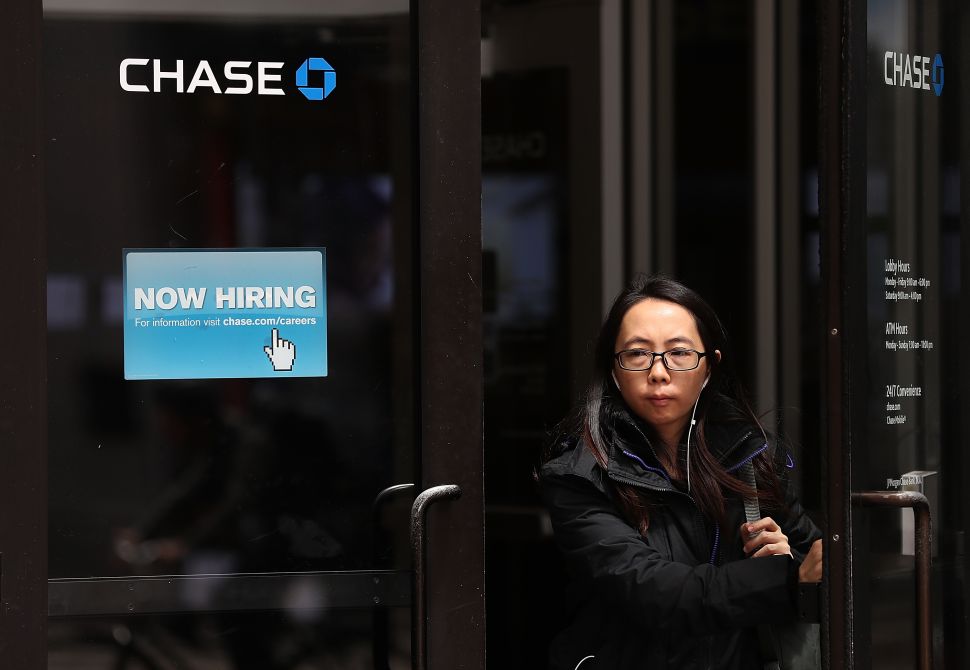