I just want to get to work . I am so tired. Traffic in L.A. is already such a headache, and almost every day I get stuck behind James Corden doing “Carpool Karaoke.”

I know. I know. I chose to live here. I work in West Hollywood as a tax attorney. What did I expect? It’s just frustrating to be stuck behind a car that is driving around in circles solely so celebrities can sing over the recorded sounds of their own voices.

If you look in the background of every Carpool Karaoke video, you will likely see my car swerving in and out of frame, trying desperately to get in front of Corden and Gwen Stefani. I have meetings I cannot afford to miss.

Corden drives very slowly when filming Carpool Karaoke. He does not want to alarm Adele. I understand this. But roads are not playthings. They are how people get places. I need to be in the office by nine or else Linda at reception will email Mr. Fielding and I will get a stern talking to.

Bars are for karaoke.

You know it’s Corden’s SUV when the car is clearly swaying to the beat of “Teenage Dream.”

Carpools are supposed to save gas and decrease traffic. These are millionaires with a dedicated television studio. This segment is an insult to carpools, which mostly consist of work acquaintances sitting in silence, not Demi Lovato acting fake surprised to see Nick Jonas with a prop hitchhiking sign.

For someone who’s singing style relies so much on his hands, James Corden should not be driving. I keep thinking he’s trying to signal to me and other drivers, but really he’s just laughing really hard at the idea of Harry Styles knowing all the words to a rap song.

I have almost hit the Carpool Karaoke SUV several times when James suddenly slams on the breaks because he cannot believe that Elton John does not own a cellphone. I am going through a divorce, and I cannot afford to replace my fender right now.

I’m beginning to think that Justin Bieber genuinely carpools in with James Corden, because they only release one of these a month, but I swear I see them driving around singing twice a week.

James Cordan seems like a nice fellow, almost unnecessarily so. Our country has said yes to him. He should relax. All I ask is that he drive around a parking lot or at the very least take a defensive driving course. Maybe he should try listening to podcasts like the rest of us.

I am on my third warning at work. Please, James, use a green screen. 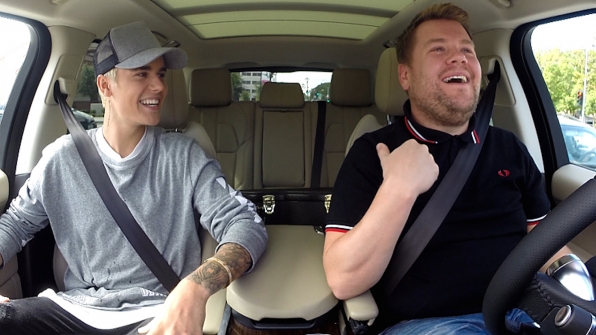