The latest poll—and again, it’s the CNN poll, so it cannot be easily dismissed by Clinton backers as a right-wing outlier—finds that Clinton’s lead over GOP nominee Donald Trump has evaporated. Now Trump leads Clinton by 2 points (with a margin-of-error of 3.5 percentage points). Just a couple weeks ago, Clinton led Trump by 8 points and appeared to be pulling away—making November look like it might be a landslide for a woman whose actions have been investigated by the FBI.

What’s even more striking about this reversal is it comes as Clinton and her allies have outspent Trump and his allies by an eye-popping 4.5-to-1 margin. The Observer has learned from sources in the field of political media buying that Clinton and PACs supporting Clinton have spent somewhere around $125 million through the end of August on television commercials. That compares to less than $30 million for Trump and pro-Trump PACs. Clinton’s total includes over $53 million spent by Priorities USA, which has raised at least $109 million, according to OpenSecrets.org. This makes the dramatic shift in the candidates’ fortune all the more striking, since pro-Hillary forces have been banking on her ability to raise colossal sums from elite donors—even The New York Times dinged her in a story called “Where Has Hillary Clinton Been? Ask the Ultrarich”—as a foolproof weapon.

The Clinton landslide many insiders predicted (the Times has nudged up Trump’s chances from 10 percent to 16 percent in its daily horserace) may no longer be a foregone conclusion, after more than a week of bad news has piled up for Clinton. It started with a revelation from The Associated Press that more than half of the people who had meetings with Clinton while she was secretary of state also donated to the Clinton Foundation. Then a poll on Wednesday found registered voters now view Clinton about as negatively as they view Trump.

Clinton is a historically disliked candidate, but Trump is even more disliked. This was sort of a selling point for Clinton. “Hey, you don’t like me, but you hate him,” was the thinking. That poll removed that selling point.

Then Politico, The New York Times and McClatchy released back-to-back articles detailing other problems with the Clinton Foundation, and it’s cozy ties with Clinton’s State Department. Finally, the FBI released notes from its investigation into Clinton’s mishandling of classified information while she conducted official state business on a private email server. The key takeaway was that Clinton is either truly incompetent (and should be nowhere near the Oval Office) or is a corrupted liar. She may very well be both.

The media continues to focus on Clinton, rather than Trump. Clinton had a brief escape Wednesday evening, when Trump delivered an immigration speech that seemed to cement his earlier position on building a wall and deporting all illegal immigrants (but allowing those who broke no additional laws back into the country by legal channels). Prior to that speech, the only Trump news consisted of his campaign shakeup.

It looks like the latest changes in Trump’s campaign are working. New campaign manager Kellyanne Conway seems to have softened Trump’s rhetoric. New campaign CEO Steve Bannon doesn’t seem to have “let Trump be Trump,” as many feared. The release (finally) of some Trump campaign ads and bringing in former Chris Christie consultants Jamestown Associates (full disclosure: a group I am currently collaborating with on a documentary) to help professionalize communications has also helped keep Trump out of the headlines for outrageous comments or actions.

Clinton’s main hope for this election was for Trump to implode. For months, she has been able to coast on Trump’s unpopularity. Whenever something negative did pop up for her (like revelations about her private email server or the Clinton Foundation), Trump was there to take the wind out of her sails. But with Trump holding steady and avoiding the kinds of statements and actions that previously led to derision, Clinton will actually have to stand on her own merit.

Based on the news and polls of the past week or so, that doesn’t seem to be going so well. Of course, as I’ve said previously, this is one poll. Things could change. State level polls aren’t (yet?) showing Trump gaining or pulling ahead of Clinton. Those polls will matter more than national polls.

Still, if Clinton can’t right her ship, or if Trump doesn’t do anything outrageous, this election might not be the landslide some politicos originally thought. 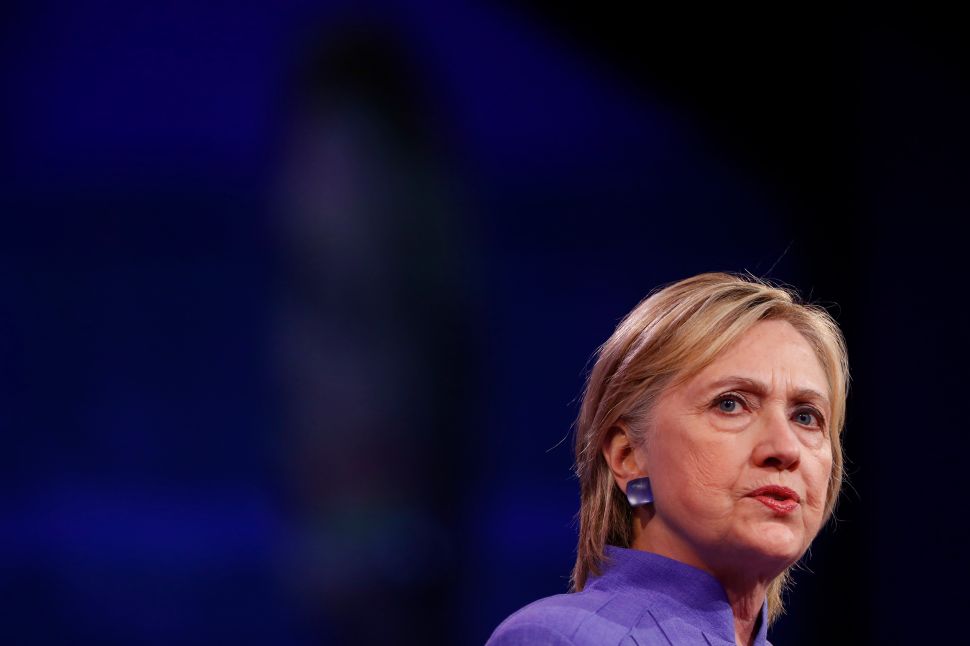