Seventeen years ago, I was a hard partying frat boy at the University of Chicago. Halfway through my undergrad studies, I realized I didn’t have the chops to get into medical school.

As an Indian, getting into med school was a coming-of-age ritual as essential as spawning to salmon. Plus, my mom was a doctor. Years later, my little sister, Mindy Kaling, would become a doctor, but she was smart enough to skip med school and simply write herself the part for her TV series, The Mindy Project.

I had to get in the old fashioned way: cheat.

At first, I panicked, but then reasoned out an answer: I would transform from an Indian American into an African American and use affirmative action to gain entrance to a med school.

As an Asian American, I would discover that affirmative action discriminated against me.

As an applicant to Case Western University, I found there were separate interview days and interviewer (The Director of the Office of Minority Affairs) for affirmative action applicants. Yes, Ohio’s prestigious Case Western University sorted their applicants based on race. I guessed they figured it was okay if they called it affirmative action, instead of the less PC “racial segregation.”

“We don’t discriminate based on race” (wink, wink):

Many universities I interviewed with heatedly denied using racial preferences in admissions. Yale, Washington University, and the University of Pennsylvania proudly claimed their schools “did not discriminate on the basis of race,” although they publicly endorsed racial preferences in the Supreme Court’s recent Fisher decision. I managed to get waitlisted at highly ranked Wash U and U Penn, despite my 3.1 GPA being significantly below their average of 3.7.

Quotas are legal if you don’t call them quotas:

The Association of American Medical Colleges’ (AAMC) Project 3000 by 2000 set quantitative targets, or “quotas,” to increase enrollment of minority students from 1,584 in 1990 to 3,000 in 2000. University of California Regent Ward Connerly and statisticians Jerry and Ellen Cook concluded that many American medical schools were compromising their academic standards in order to fill their quotas. Not that I’m complaining: Project 3000 by 2000 helped me get into St. Louis University’s School of Medicine regardless of my low grades.

As an example, the University of Wisconsin School of Medicine, despite their state’s strict residency requirements, invited me to apply as a non-resident minority. I wondered if Wisconsin voters knew their hard-earned tax money was helping recruit out-of-state students (like me) to fill the spots of, perhaps, more qualified in-state students, some of whom might even have been minorities.

It promotes opportunity… and stereotypes:

Would I have made a good doctor? Does affirmative action down meritocracy and demean minority achievement, as many contend? I feel I earned my place in med school by hook or crook. However, I believe most students earn theirs legitimately, regardless of their color, or whether it’s med school, law school, or any other path of higher learning. Still, affirmative action spreads negative stereotypes about blacks and Hispanics by making it seem like they only got in because of their race, not merit.

Affirmative action does not always benefit the underprivileged:

A popular belief is that affirmative action always benefits the disadvantaged. In my application to medical schools, I fully disclosed my affluent background and that I did not receive a penny of financial aid as an undergrad. Yet, schools offered me special treatment. Did they think that every black kid comes from the ‘hood? This form of racism assumes all blacks and Hispanics were broke and needed help. The irony is that there are legions of legitimately disadvantaged Asian Americans and whites left behind by affirmative action.

Affirmative action works, sort of. But it’s flawed, discriminating against some for the benefit of others. Affirmative action needs to be changed, so it works for all who truly need it, regardless of race or color. How much more American can that be?

Vijay Jojo Chokal-Ingam is the coauthor of Almost Black: The True Story of How I Got into Medical School by Pretending to Be Black with Matthew Scott Hansen. 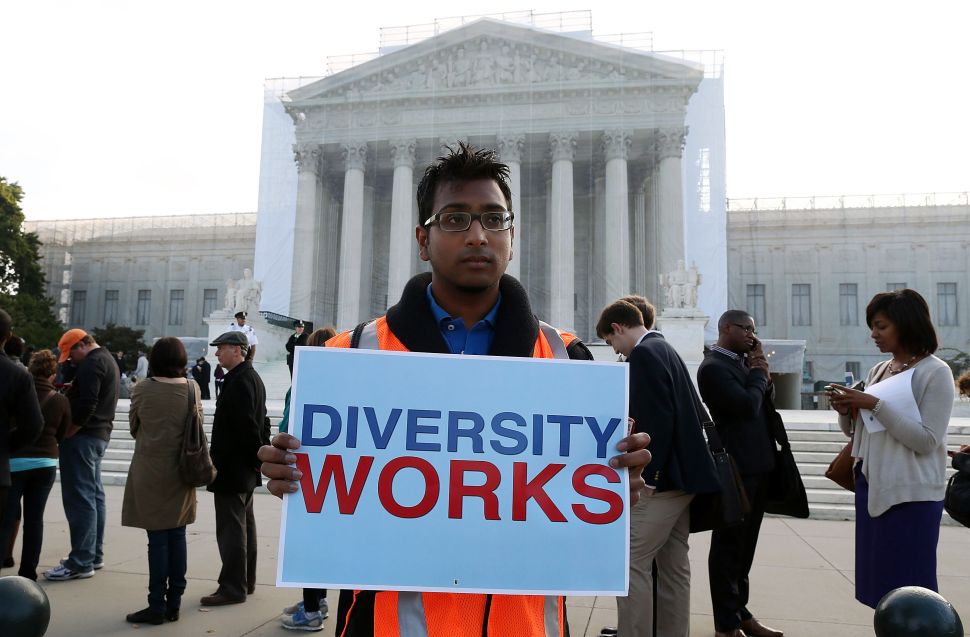