Alexander Wang knows what the people want. And this season, he brought them McDonald’s burgers, Slurpees from 7-11 and polos from Adidas Original, much to the joy of fashion editors, rappers and models.

Directly following Wang’s Spring/Summer runway collection, where models nearly sprinted down the runway in bikini tops and variations on ’80s scuba gear, the real fun began. Well, it happened after a flashing video revealed Wang’s surprise collaboration with Adidas; the finale of the show also saw the models decked out in polos, sweatshirts and track pants from the forthcoming partnership that makes so much sense.

Showgoers trickled from their seats towards the party space, where a traffic sign flashed phrases like #wangfest and the phone number 917-325-3342. As it turns out, that number can be called today, on September 11 to find a pop-up truck that will be selling merch from the Adidas collab; you can also find it by visiting the social media handles of @adidasOriginals and @AlexanderWangNY. Guaranteed to make stops in Midtown, Williamsburg and Soho, this is your only chance to scoop up these wares before they officially hit stores in September 2017 (though pop-up trucks will also be coming to London and Tokyo on September 17).

Guests at Wang’s bash last night were able to shop from the range as well, with a line snaking around the merch booth at all times. Purchases were delivered to shoppers in a black garbage bag, branded with Wang and Adidas, of course. And that was the general vibe of the evening: a bit trashy, but definitely very cool.

There was a 7-11 truck, where models and guests pilfered the shelves of free junk food, grabbing packs of M&Ms and Sour Patch Kids by the handful; an adjacent truck was serving up Slurpees, accessorized with a straw made from a glow stick. Toward the back of the party, McDonald’s was serving up hamburgers and fries, both of which were a big hit among the crowd. The sign above the fast food station appropriately read “Legends made here.”

Beauty fanatics flocked towards the claw machine, where everyone was a winner and the prize was Nars makeup. Smokers ambushed the waiters who were doling out lighters branded with Wang’s name and wasted no time in lighting cigarettes (or otherwise) in Pier 94. And how could we forget the Lexus SUVs, which were spruced up with a few coats of spray paint; Wang himself took to one of the cars, tagging “$ponsored” on it.

Up in the VIP section, Madonna and daughter Lourdes mingled among the likes of Pamela Anderson, Zoë Kravitz and Nicola Peltz, while Kylie Jenner cozied up to boyfriend Tyga, with her BFF Jordyn Woods by her side. Plenty of models roamed the space as well, including Hanne Gaby, Jourdan Dunn and Anna Ewers. As for musical performances, South Korean bad girl, CL, was up first with a three-song set, followed shortly by rapper Travis Scott and Desiigner. Naturally, the performers were decked out in Wang’s new collaboration with Adidas.

Although most of the fashion crowd will return to their diets of green juice and salads—once they’ve recovered from their hangovers—Wang’s party, which went on well past 4 a.m., was a welcome cheat day. 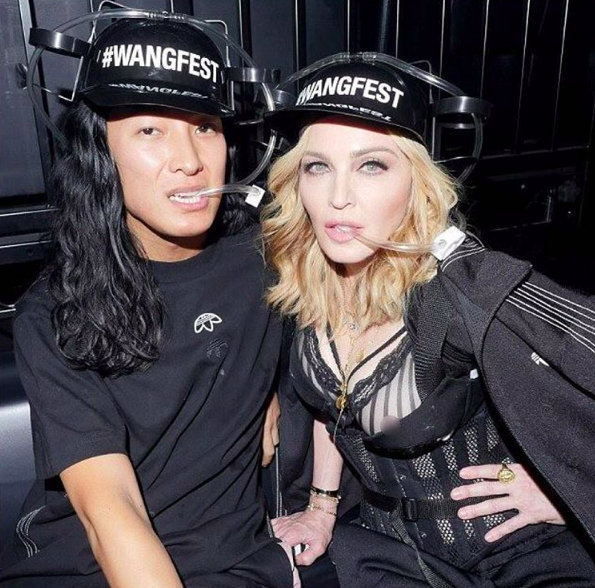