Hours after reports surfaced that Cuomo’s former deputy executive secretary and political enforcer Joseph Percoco would face arrest today, the prosecutor for the Southern District of New York unsealed a criminal complaint implicating not just Percoco but seven other men. Among them are Buffalo developer Louis Ciminelli, a top contributor to the governor’s political campaigns, and Alain Kaloyeros, the flamboyant head of the State University of New York Polytechnic Institute—both major players in the Buffalo Billion, one of the governor’s central economic development initiatives.

At the heart of the charges are payments Percoco and his wife received while the governor’s aide was on sabbatical from the state to manage Cuomo’s 2014 re-election campaign, though the complaint purports that the alleged kickback schemes date back as far as 2010—the year then-Attorney General Cuomo successfully sought the state’s top office.

“To wit, Percoco, who was a senior official in the office of the governor of New York State (‘the State’) and others known and unknown, would and did cause companies with business before the state to direct payments to Percoco in exchange for official actions taken or to be taken by Percoco for the benefit of the companies paying him,” the document reads.

The complaint claims Percoco went by the nickname “Herb” and referred to money as “ziti,” in the style of the mob family in HBO’s The Sopranos.

Michael Laipple and Kevin Schuler, two executives in Ciminelli’s company, are also among the defendants. So is Peter Galbraith Kelly, the head of the Maryland-based Competitive Power Ventures, another top Cuomo donor. Finally, Steven Aiello, the president of Syracuse’s COR Development—one of the companies that paid Percoco, and the father of another Cuomo administration aide—also faces charges.

In one arrangement, Bharara alleges Kelly channeled several hundred thousand dollars to Percoco and his wife in exchange for help building a power plant in upstate New York, and for other public assistance the company never received—including a guarantee the state would find a buyer for energy from the facility, and the closure of the controversial Indian Point nuclear plant in Westchester, which the governor has advocated for. CPV also donated a private jet to the governor’s 2010 campaign, and Kelly took Percoco out on fishing trips and for expensive dinners.

The prosecutor claims Aiello and his corporate attorney passed Percoco another $35,000 to get the Empire State Economic Development Corporation—a Cuomo-controlled entity—to pay it for building a parking lot servicing a hotel in Syracuse, despite the hotel having not reached a required labor agreement.

The complaint asserts that some of the public funds Percoco funneled to Kelly’s company in exchange for pay included money from the federal government.

And in a separate purported scheme, Kaloyeros conspired with Aiello and the leadership at Ciminelli to tailor requests for proposals from the Fort Schuyler Management Company—an offshoot of SUNY Polytechnic, an arm of the governor’s under-performing START-UP NY program and a handler of construction contracts in the Buffalo Billion initiative—so only the colluding developers could qualify. As part of the state university system, SUNY Polytechnic and its affiliates fall under the control of a Cuomo-appointed board, and thus of Cuomo himself.

The various interactions and transactions among the accused traveled along federally-regulated wires, opening up another array of fraud charges. The prosecutor also charges Percoco and Kelly lied to federal agents, failed to disclose the payments on the appropriate government conflict of interest forms and made false statements to an attorney for the administration.

The pair allegedly enlisted the services of Todd Howe, a lobbyist who worked in the governor’s father’s administration and for Cuomo at the U.S. Department of Housing and Urban Development in the 1990s. Howe, now cooperating with the Department of Justice, has confessed to creating bank accounts and a shell company to handle the transfers of cash. He was charged in a separate, simultaneously released complaint.

All told, Bharara charges the governor’s lieutenant raked in more than $320,000 in cash, while his co-defendants reaped hundreds of millions of dollars in state contracts.

Cuomo’s office did not immediately respond to requests for comment. The governor himself faces no charges of wrongdoing, and he admitted in April that “former state employees” may have “deceived” and “defrauded” his administration and engaged in “self-dealing.”

Percoco left Cuomo’s office at the end of last year to take a job at Madison Square Garden. He worked under the governor’s late father, and under Cuomo as both attorney general and governor. Cuomo in the past has referred to him as a brother. 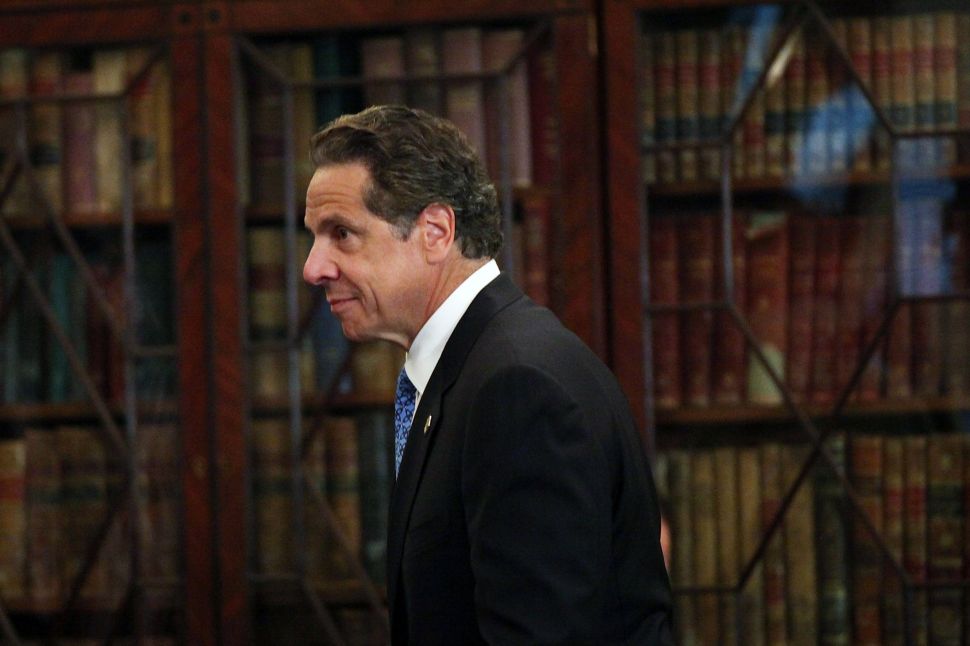