Amy Elliot Dunne is a Crazy Bitch. She is a Crazy Bitch the way Alex Forrest and Rebecca (the first Mrs. de Winter), and Bertha Mason and Sharon Stone from Basic Instinct are Crazy Bitches. The domed hall of portraits in The Museum of Bitches Be Crazy features their oil paintings, one after another, each with a smirking half-smile against a Rembrant-black backdrop. There’s a permanent retrospective on the Femme Fatale down the hall, a traveling Scorned Lover exhibit here until October, an entire wing devoted to the girl in the trailer for that psychological thriller made-for-TV movie. That girl looks different every time—infatuated co-ed, desperate spinster, black, white — but every each one will be standing over a cradle for a more virtuous woman to warble—with all of the emotion she can muster for a TV movie—“You stay away from my child!” The Crazy Bitch doesn’t have a child of her own. Maybe that’s why she’s so unhinged.

There is a paucity of feminist characters in film and so much confusion about what a feminist character would look like that it’s tempting just to lump them all together. Calling Amy Dunne a feminist is a tempting act of reclamation—isn’t she, after all, the smartest person in the film, able to manipulate people and the law to get what she wants? Doesn’t she cut her own hair—the moment we’ve been taught since Yentl and Mulan is the symbol for taking control of one’s own life? Doesn’t she give that monologue about “cool girls” who need to drink beer and pizza and still remain a size two that we all highlighted in our Kindles?

There are some people out there who believe that this outrageous, sociopath version of a woman—who would also break her own face with a hammer and murder a man with a box cutter—is what a feminist looks like

There is a dark corner of the Internet filled with bad memes and Donald Trump supporters where the hashtag #FeminismIsCancer is passed around un-ironically. They believe in an imaginary epidemic of women who lie about domestic abuse and rape—wily women like Amy Elliot Dunne who lure men in with wanton sexuality just to ruin their lives. Because remember, Amy did frame a man for rape before she framed her dull, cheating husband for murder. It’s fun to cheer for Amy as Ben Affleck, slack-jawed, bumbles his way through a murder investigation. It is such visible fantasy, a brilliant woman, scorned and getting her revenge in a cinematic exaggeration of justice. It’s immediately chilling when they remind us that she also lied about sexual assault because there are some people out there who believe that this outrageous, sociopath version of a woman—who would also break her own face with a hammer and murder a man with a box cutter—is what a feminist looks like.

These are the people with other strange notions of feminism: that if we’re not immoral sexpots out to sabotage the justice system, then we’re all fat and desperate for male attention and turned towards adorable and unnecessary ideas of “empowerment” because we haven’t been able to get any dick.

Forgive my pedantry here, but I fear there have been so many misunderstandings about a simple word that I must attempt to be as clear as possible: There is no feminist I have ever met who actually wants to kill all men. That is simply not on the weekly agenda, nor has it ever been (although I confess I missed a meeting last April). If you come across tweets or enamel pins with the phrase “kill all men” in curly type, I can assure you it’s meant as humor, expressing frustration with a genuinely frustrating daily barrage of sexism by leaning into the “kill all men” stereotype as a joke. Same goes for self-proclaimed cat ladies and feminist killjoys. We’re called it already, so sometimes it’s better for our sanity just to embrace the labels for the heck of it and make it something we can laugh about.

And now back to the point at hand:

A character like Bryce Dallas Howard’s uptight park director from Jurassic World is not a feminist character because she is able to run away from dinosaurs in heels and survive. The character might identify as a feminist—we don’t know. They never asked her. But the role itself in the film—an uptight stick-in-the-mud who isn’t complete because she doesn’t want children and has to learn how to open her heart to a boring guy named Chris who has intuition and a cool motorcycle—is pretty antithetical to most of the things feminist tend to want in their characters.

This is an important distinction: whether the character is a feminist versus whether it’s a feminist character. The former is merely a character that’d call himself or herself a feminist within the universe of the film. The latter is a representation that challenges the stereotypes the way gender is portrayed on screen and allows women to be full, interesting characters. Amy Dunne might be a feminist character because she’s an interesting monster, with plans and ambitions and a perspective and flaws, but it seems an enormous stretch to characterize her as a feminist. She uses women around her as readily as she does men. She doesn’t fight for reproductive freedoms or call her senators about paid maternity leave. She just… happens to be a woman doing smart, cool, violent things.

And when people are confused about that, it becomes a tiny bit more conceivable when people defend a man like Brock Turner, who forced his fingers inside an unconscious woman behind a dumpster and ran when he was confronted by two witnesses. He was found guilty in a court of law, and he only served three months of jail time. Some people still think of him as a victim.

Amy Dunne and Sharon Stone from Basic Instinct had victims. And while it’s fun to celebrate and vicariously embrace their power, there are people in the world still deluded enough to think that’s the only way women are ever strong. 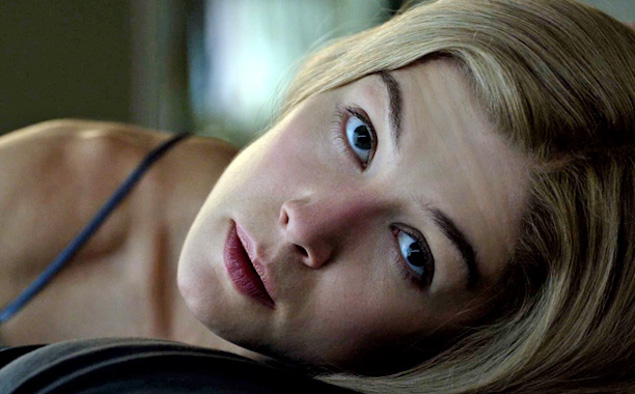