Opening: “Hans Memling: Portraiture, Piety and a Reunited Altarpiece” at the Morgan Library and Museum
The German-born painter who moved to Flanders is among the most notable figures in early Netherlandish painting today. Memling’s 15th century altarpiece painting, the Triptych of Jan Crabbe, was disassembled and scattered in the 18th century, and now the Morgan will reunite the masterpiece in the U.S. for the first time, combining the pieces from the museum’s collection with the Musei Civici of Vincenza, Italy’s central panel. The triptych will be accompanied by several other portrait paintings by Memling, including a special piece from the Morgan’s collection, Man with Pink.

“Organizers have selected 100 artists to fill the rooms of the historic houses on Colonel’s Row and the vaulted chambers of Fort Jay and Castle Williams.”

Opening: “9th Annual Governors Island Art Fair” on Governors Island
This sprawling DIY month-long exhibition, spearheaded by arts nonprofit 4heads, has run on Governors Island each fall for the past nine years. Once more, it returns to delight New Yorkers looking to escape the city without going too far, and will be open every weekend through September 25. Organizers have selected 100 artists to fill the rooms of the historic houses on Colonel’s Row and the vaulted chambers of Fort Jay and Castle Williams, where works will range in style from paintings and photography to transformative immersive environments. As it did last year, sculptures will spill onto the island’s green lawns, and a program stuffed with music, food and activities will take place throughout the month. Sculptor Aleksandr Razin’s monumental work made of twisted car parts was a favorite last year, and since Razin and several artists from previous editions are returning, I can’t wait to hop the ferry and explore the show during one of September’s warm weekends.

“Sculptures will spill onto the island’s green lawns, and a program stuffed with music, food and activities will take place throughout the month.”

Performance: “Exo-Tech: Industrial Exotique” at Pioneer Works, $15 in advance and $18 at the door
This musical collective, founded by Australian musician Sophia Brous and New Zealander Kimbra, was invited to be the inaugural artists-in-residence at New York’s Red Bull Studios this year. Exo-Tech collaborates with a rotating band of heavy-hitters, including Cibo Matto’s Yuka Honda, Arcade Fire’s Stuart Bogie and Dour Wieselman, who has worked with Antony & the Johnsons and Laurie Anderson. For this performance at Red Hook’s Pioneer Works, the group’s musical network will grow even bigger, and special guests such as Sean Ono Lennon will join the jam session.

Opening: “From Doodles to Pixels: Over a Hundred Years of Spanish Animation” at MoMA
This eight part series spotlights the innovations of Spanish animators, from the hand-drawn mastery of K-Hito (Ricardo García López) during the early 20th century to contemporary films by Pascual Pérez and Rodrigo Blaas. Many of the movies MoMA is screening were restored through recent scholarly initiatives lead by the Contemporary Culture Centre of Barcelona and Acción Cultual Española.

Opening: “Breaking Ground: Redefining the Urban Experience, Featuring John ‘Crash’ Matos” at JoAnne Artman Gallery
Bronx-born graffiti artist John Matos, a.k.a. CRASH, has been painting the streets and trains of New York since he was a teenager. The artist’s freehand murals have been featured in major surveys on street art such as the Brooklyn Museum’s 2006 show “Graffiti” and MOCA Los Angeles’ “Art in the Streets” in 2011. His show at JoAnne Artman will feature a series of new works on canvas.

Opening: “Ed Moses: Painting as Process” at Albertz Benda
The last time I caught up with the venerable West Coast abstractionist was in 2012 when I interviewed him for another publication, and his work had just recently been featured in the massive, statewide Pacific Standard Time exhibition initiative headed by the Getty Center. If Moses was having a moment then, his work is just as in vogue today and his influence all the more important to a younger generation. This retrospective at Albertz Benda, his first on the East Coast, spans 50 years of his career, beginning with architectural drawings from the 1950s and capping off with his loose experiments with pigment on canvas during the 1990s.

Opening: “Simon Denny: Blockchain Future States” at Petzel Gallery
Does a future fueled by decentralized cryptocurrencies such as Bitcoin seem far off? It’s not. It’s already here thanks to financial companies such as Ethereum and Digital Asset and the digital database Blockchain, which is helping this burgeoning market thrive. Denny dives into the companies that are building the future of global trade through his playful artworks which translate all the financial speak into a series of games.

Opening: “Joan Semmel: New Work” at Alexander Gray Associates
For nearly 50 years Joan Semmel has captured the awkward and delicate beauty of the nude form with her intimate portraits, both of herself and others at rest or engaged in sexual acts. In recent years, her focus has turned to self-portraiture and the aging female form. As she has in previous works, tight crops and unconventional angles bring the viewer close to images saturated with color. 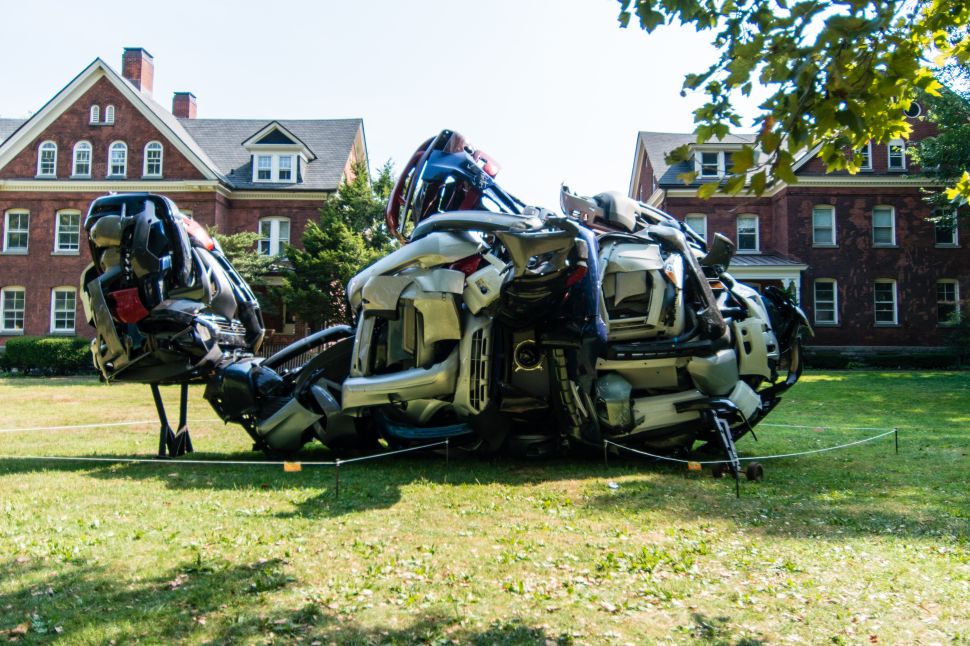