Angel Olsen’s MY WOMAN has two souls, smeared across gradients, shape-shifting as the 29-year-old songwriter sees fit. It is, initially, willfully naive about romance: Olsen summons uncomplicated tropes about falling in love and falling apart in love. This character gives herself fully to the chase, to the fever. She knows better but martyrs herself anyway. The silver-tinseled wig, the pouting, the snark: Bowie would be proud.

The second half of “Not Gonna Kill You,” five songs into MY WOMAN, positions Olsen closer to the author of Strange Cacti, Half Way Home and Burn Your Fire for No Witness—not the caricature of the lonely heart Olsen is currently dispelling in interviews, but the woman with a seer’s touch. “However painful, let it break down all of me,” she sings, “‘till I am nothing else but the feeling, coming true.” She is, to my ears, deliberately less wise a few beats earlier. Or, if we’re not comfortable with that thinking—who’s “wiser,” the stoic or the libertine?—her initial delivery is surely less subtle. Which is the point.

By using both reckless and world-worn voices, Olsen validates all experiences of human entanglement. “Can’t help feeling the way that I do,” she continues in “Not Gonna Kill You.” “Become a prophet, become a fool.” We’ve seen her toe this line between serenity and oblivion before: “Halfway insane,” goes “Always Half Strange,” from 2012. “And halfway home, in your arms.” She suggests that raw instinct, however feral and unsafe it seems, is where life really happens. She’s always deconstructing experience in the service of locating truth.

What begins in “Not Gonna Kill You” blossoms in the murderers’ row of “Sister,” “Those Were the Days” and “Woman,” except fever clouds part and Olsen stares directly into her pain and longing. The image works two-fold: Olsen’s character is no longer caught in sensation’s riptide, and the music itself evolves from a terse, fuzzy psych-folk to a sound more glass-eyed and spacious. Side B affects a dream state that’s all too real.

Critics have noted this section’s Rumours-like quality, and it’s not as if she’s tried to hide from that era’s influence. But Olsen’s only channeling it in a cursory way. Perhaps this is blasphemy, but, gun to head, I’d take “Woman” over anything Fleetwood Mac wrote in its prime. I’ve never shed tears listening to Stevie Nicks.

There’s a sacredness in Olsen’s voice. It conveys uncharted streams of feeling, both healing and violent, and it aches whether she’s playful or aggrieved. She shares little in the way of biography, names or places, or whether she’s moved by lovers or friends or family. Instead she draws us close to a visceral, nonverbal center. Her work implies that biography is irrelevant when the only true thing we know from birth to death is the flailing of our hearts. So Olsen deals in little sleights of hand, and with each release she’s more elegantly hiding the seams.

This can be frustrating for the listener who needs to know all. Because we’re conditioned to process certain sounds as “sad” or “intimate,” the stripped, Skeeter Davis-on-Blue-Dream sound of 2011’s Strange Cacti and, to a lesser extent, 2012’s Halfway Home, made it easy to believe Olsen was staring us between the eyes, baring all her wounds. Her role as an “independent” songwriter enhances this slippery notion—we’re more likely to assume her songs are based in felt reality because they aren’t written by committee in Nashville or Los Angeles. Who can say? Maybe Olsen songs are like journal entries, maybe they aren’t. It doesn’t matter either way.

We should take the critic Greil Marcus’ lead here. “What are we doing when we listen?” he asked rhetorically in an interview with Nerve’s Phil Dellio in 1986. “What happens? What doesn’t happen? What could happen? I really am a critic in the sense that I don’t really give a shit what the artist intended, or what he meant. I couldn’t care less. What I’m interested in is what happens when you listen.”

Amen. We should free ourselves to more acutely feel ourselves brooding or twirling or collapsing in response to Olsen’s voice and song, regardless of origin. Anyway, what is art but a wordless signal pinging from one spirit to another?

Olsen’s vigorous self-searching and curiosity remind me of a passage by Annie Dillard, in 1974’s Pilgrim at Tinker Creek:

“The gaps are the thing. The gaps are the spirit’s one home, the altitudes and latitudes so dazzlingly spare and clean that the spirit can discover itself like a once-blind man unbound. The gaps are the clefts in the rock where you cower to see the back parts of God; they are fissures between mountains and cells the wind lances through, the icy narrowing fjords splitting the cliffs of mystery. Go up into the gaps. If you can find them; they shift and vanish too. Stalk the gaps.”

Or maybe T.S. Elliot is better: one senses in her incantations a desire to inhabit the poet’s “still point of the turning world.”

“Neither movement from nor towards,” he wrote. “Neither ascent nor decline. Except for the point, the still point, there would be no dance, and there is only the dance.” Dance “slow decades toward the sun.”

I imagine it’s difficult for Olsen to stalk any gap—of the spirit, of the natural world, of relationships—while being one of independent music’s most visible faces. She’s suggested this in recent interviews, and surely the pressure is worse than we know. “Again and again we return to Olsen’s fear of being trapped,” relayed the author of one of the better articles on her reemergence. And: “Above all, Olsen fears being ‘trapped by my own art.’ Trapped by a ‘tagging culture’ that can’t compute creative complexity. Trapped by the emotional intensity of her fans’ responses.”

Perhaps Olsen was too polite to say it, but she also seems trapped by the necessity to speak about being trapped—interviews can be suffocating for artists with any regard for their time or energy or self-respect. I can’t speak for Olsen, and sometimes she seems thrilled to speak with journalists, but our consistent obsession with pinning down a narrative or being liked by our subjects is ultimately toxic for conversation between artists and the public.

What does anyone gain from five or 10 or 20 articles conveying the same or similar narratives, especially when we learned many of them during the prior album cycle? When Olsen boldly shifted course with Burn Your Fire for No Witness, imbuing her songs in garage and Orbisonian and even bossa novan tones, the narrative obsession began: We don’t know the real Angel. Angel isn’t our sad folkie pin-up girl. Angel actually likes to have fun.

Does anyone really doubt that Angel Olsen has more than one personality trait? This press cycle is concerned almost entirely with goading her into sharing again and again how she feels about how others feel about her work.

“Are you misunderstood?” we repeat. Of course she is. What compelling artist isn’t?

Anyway, she turned to Twitter this summer to comment herself: “Things I wish I could tweet but I can’t because of some fake status,” reads a missive from July 8. Or, on August 18: “Here’s what I really think about ‘phoners.’ ” Attached is Urban Dictionary’s definition of the term, which normally implies “phone interview” but here means “the act of achieving an erection while sexting.”

Vicki: Did you get that picture I sent last night?

Michael: Yeah, definitely got a phoner from it.

That’s how the accompanying screenshot read.

An outsider might conclude that Olsen is ungrateful for the attention, but consider how painful this is to listen to, let alone what it must have been like to be a participant. Or imagine how it feels to spend an afternoon with a journalist only to have the resulting headline read “Angel Olsen Ditches Sadness and Dives into ’60s Rock.” The logical fallacy here—how are “sadness” and “’60s rock” mutually exclusive?—is only bested in degrees of inscrutability by the fact that MY WOMAN explores myriad sounds, not just “’60s rock,” a term, by the way, that tells us nothing specific.

And: Olsen ditched sadness? No close listener of MY WOMAN would come away with this opinion. Moreover the first two sentences here, written by someone with bylines at serious publications (Pitchfork and The Quietus), suggest that both writer and editor created this on cruise control.

“It takes a great amount of effort to find someone who doesn’t respect Angel Olsen,” she writes. (It took me this much effort: I asked the lady in the cube next to me, and she replied, “who?”)

Then: “The folk rock singer-songwriter performs with a style of authenticity that, especially in today’s hyper-informative environment, is unparalleled.” Styles of authenticity didn’t raise any eyebrows? “Unparalleled.” Really? In 2016 alone Olsen is paralleled by Marissa Nadler, Julianna Barwick, Jessy Lanza, Chris Staples, Radiohead, Simone Manuel, Bernie Sanders, my friend Billy, and anyone who stayed true to themselves for any reasonable amount of time.

I’m being extreme, yes. I know what the writer meant, and I’m too aware how haunting cliches and lazy writing can be—no doubt there are blind spots in this piece and plenty others I’ve written. But surely we can agree our work should at least aspire to the clarity and depth of the artists we cover. Otherwise what value are we providing to readers, never mind historical understanding of our moment.

“I don’t care what the papers say,” Olsen sings near the top of MY WOMAN, over Berlin-worthy chords. (She means it.) “It’s just another intern with a resume.” Then: “Everyone I know has got their own ideal. I just want to be alive, make something real.”

Why do we ask what she means by all this again? 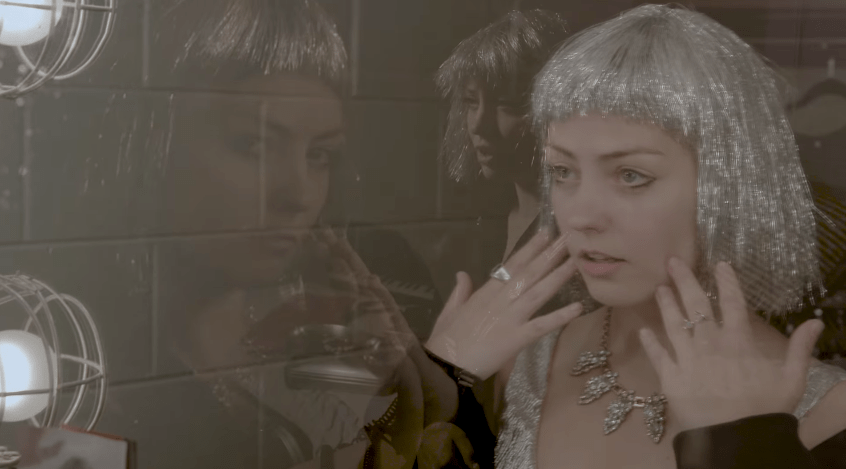