“We should be afraid,” artist Rashid Johnson tells me, in between the deafening drills of construction going on outside Chelsea’s Hauser & Wirth gallery and the whizzing of motorized platform trucks installing his work inside. “Look, we’re living in a world where a racist demagogue is the nominee of a major party. We should feel fear. We should feel tremendous anxiety, and that should be the emotion that leads us to the fucking ballot.”

We’re sitting at the counter inside the Roth New York Bar, a gritty watering hole tucked away inside the gallery that also happens to be an art installation, and the only spot for the moment where Johnson can get away from the whirlwind install going on next door for his show “Fly Away.” Resting at the bar, Johnson is dazed but calm, considering that we’re discussing his anxiety.

“Fear is a stabilizer and anxiety is an alert system,” he tells me. “There’s so many things happening today that my spidey sense goes off, and that’s my anxiety, and I’m happy to have it.” The National Alliance on Mental Illness has deemed anxiety the most common mental concern in the United States. While there’s plenty in the world to be anxious about these days, Johnson feels it’s still an emotion that isn’t readily discussed.

‘We should feel tremendous anxiety, and that should be the emotion that leads us to the fucking ballot,’ says artist Rashid Johnson.

“[The work is] an opportunity to admit something that many of us aren’t so proud of necessarily, and through admitting it…makes me feel less alone,” he says.

On view in Hauser’s front gallery are a series of faces rendered in tense, frantic lines and splatters in black soap on white tile. The paintings, or Anxious Audiences, as he calls them, represent a collective response to the seemingly never-ending series of police shootings of unarmed black men, as well as to the divisive and troubling social rift that’s been growing between Americans in the shadow of our upcoming presidential election.

In 2015, Johnson showed a series of single portraits at the Drawing Center, which he titled Anxious Men. Those works marked the first time he found himself inspired by current events. Painting the portraits was a cathartic way to explore his fears, he says, and after showing them, he was relieved to learn he wasn’t alone.

“After exhibiting the individual Anxious Men and just seeing the way people responded to that, made me realize that I was not the only anxious man,” he says. “We were in a sense all negotiating this complicated anxious space.”

The Chicago-born artist, 39, is a bona fide art star. Studio Museum in Harlem director Thelma Golden helped put him on the map in 2001 when she included his photographs in a now-iconic show of artists whose work she controversially categorized as “post-black.” Today, he’s had solo shows at museums such as Chicago’s Museum of Contemporary Art, New York’s Sculpture Center and the Memphis’ Powerhouse. After his Hauser & Wirth exhibition closes, it’ll be on to the Kemper Museum in Kansas City.

Constant in Johnson’s oeuvre of mostly sculpture and photography are themes of race and the black experience, but until now, his inspiration has been primarily historical. He’s a voracious reader, and during our chat he cites works by James Baldwin, Jacques Derrida, Sigmund Freud, Richard Wright, Claudia Rankine, Ta-Nehisi Coates and Paul Beatty. Books by the latter two authors make appearances in his show’s towering central installation, titled Antoine’s Organ, which features black metal shelves lined with hundreds of potted houseplants, blocks of yellow Shea butter, television monitors playing never-before-shown early videos by Johnson and a piano, which musician Antoine Baldwin will play intermittently during the coming weeks.

“A lot has changed in the world in the last two years,” Johnson tells me. “When I first started making this body of work, a lot had changed with me.”

In that time, Johnson also became a father. While the demands of fatherhood aren’t spoken about nearly enough in the American workplace, in the art world the discussion is unsettlingly quiet. A recent article on Artsy finally spotlighted the double standard that presumes having children changes women artists’ practice, while male artists are rarely asked about the work-life balance. However, Johnson is upfront right away about how fatherhood has changed him as a person, and evolved his work.

“Prior to being responsible for another person, I could ignore to some degree what was happening in the world, I could feel confident that I was capable of negotiating it,” he says. “But when you become responsible for another person and…they’re asking you questions about the world that they live in, you can no longer pretend as if you don’t occupy that space…That has changed my understanding of what my work can do, the questions my work can ask, and the questions my work maybe should ask.”

And so Johnson is an anxious parent, but in making work about it he’s found some peace. He no longer obsesses over the exact placement of objects within his installations. (While he admits he’s often rarely felt satisfied with the way his work looks in the gallery, today he’s willingly ceded control to those in charge of install.)

One way to deal with anxiety is to talk about it, and another is to look for an escape route, which is where the title for Johnson’s show comes into play. Johnson began with the 1929 song I’ll Fly Away, which has been sung over the years to the tunes of gospel and Country and by artists such as Johnny Cash, Alison Krauss and Kanye West. At its core, it’s a song about death, but its lyrics paint an ethereal departure to the afterlife. Johnson counters the unease that surrounds his Anxious Audiences with imagery that evokes joy in his Escape Collages, pictures of palm trees and bucolic greenery laid over colored tiles.

It took Johnson a long time to make artwork about the subjects he broaches in “Fly Away,” and while he may be ready to grapple with his emotions, these are not light subjects. But ready or not, the American public is talking about them, and Johnson’s work is steering the conversation in a therapeutic direction. From the living, breathing, musical environment in Antoine’s Organ to the tension in the faces of the Anxious Audiences, Johnson’s work overwhelms the senses and emotions, but he has faith in viewers’ ability to continue to discussion. 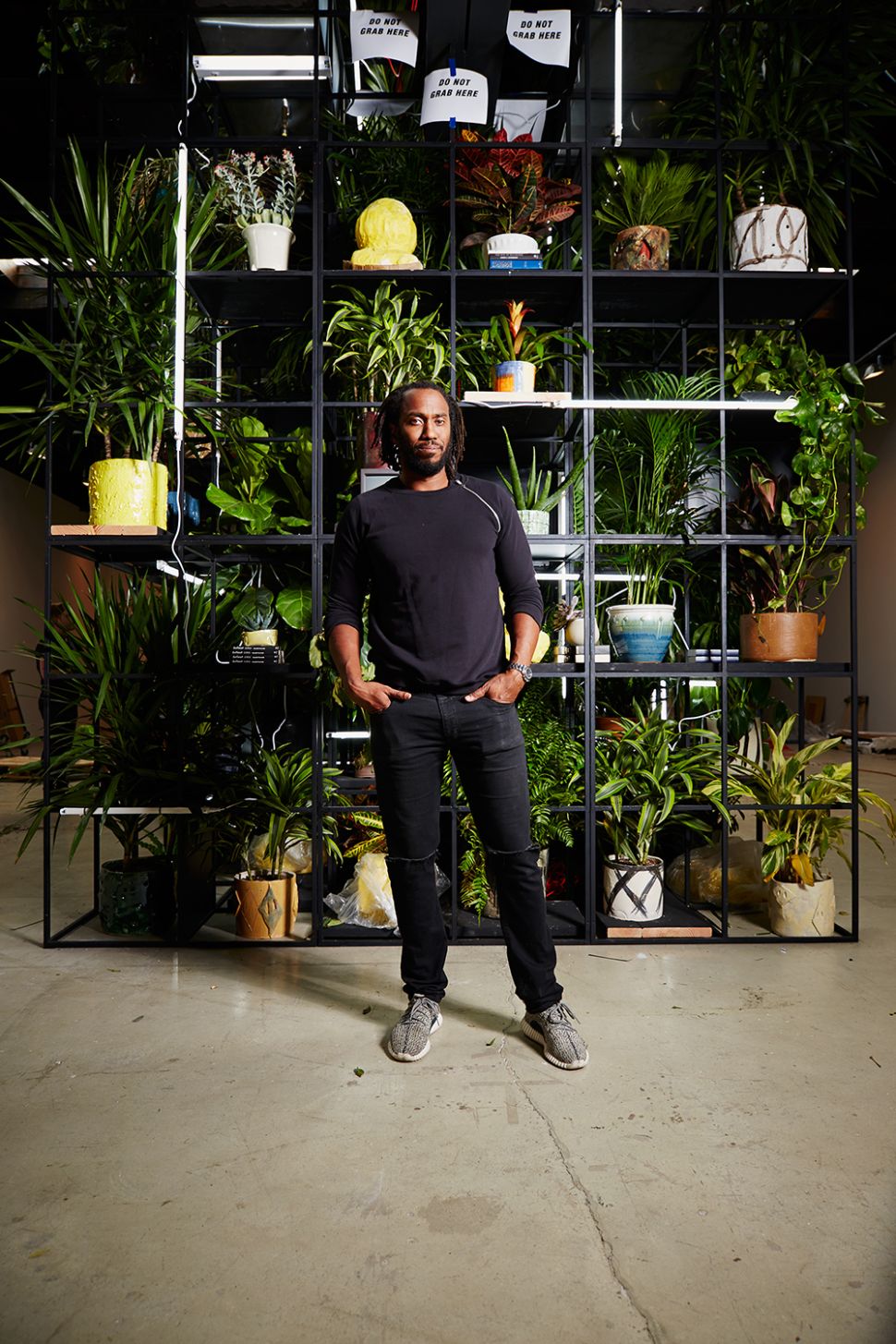