We mustn’t cry. No. Not today. We can’t. *giggles* Not on Rex Manning Day.

There’s no time to mourn this season because a brand new Over the Top season is starting in a week and if you check out the schedule of what they have planned, it looks like there is about to be about a thousand hours of Big Brother produced content. And they’re either voting back in Jay Roy or the Josiah the Messiah. But, before we can get to that, we have to tie up this season in a neat little bow and put it under the Christmas tree for Corey, the 12 year old kid who found the Fortune Teller machine from the movie Big and then wished to be big, became big and went on Big Brother.

Here’s the spoiler. Nicole won. Paul won the Final HoH and took Nicole over James and Nicole won. That is Big Brother. You can argue forever that Paul should’ve won. That Paul should’ve taken James instead. That the jury blew it. I hope you do. Let me see that passion. But the game is the game. Maybe Paul screwed up with his choice. Maybe Paul’s aggressive routine was what led him to the Final 2 but it would also be what forever prevented him from getting that fifth vote he needed. Maybe it was just time to see a woman beat a man. All of that is the game. And I love this game. *NBA Jam swish noise*

Now, if you’ll allow me one final conspiracy theory for the season, just for fun. James isn’t much of a speaker. He’s not going to finesse a win off talking points. It’s a bit like last season when Steve out-debated Liz, she wasn’t going to win the game with that, it’s just not her strong suit. So the argument could be made that if Paul takes James, he wins. And by Paul not taking James, it was a huge mistake. Now, let’s say someone in your family made a decision that many would argue was one of the biggest game blunders of all time. Even if that person and everyone around them readily defend the decision for all kinds of reasons. If you had a chance to soften that blow, for say, your younger brother…do you take it? 100%. And my theory is that Paulie voted for Nicole to win so that his brother Cody’s decision to take Derrick won’t look as bad. Already, in the light of day, it looks less bad. I mean Cody and Derrick were best friends and in an alliance together with a Final 2 deal. Cody didn’t get to see the stuff we saw at home, so he thought he had a 50/50 shot at it. Compare that to Paul, who wasn’t actually aligned with James. Paul felt like Nicole deserved it more, or at least that’s what he said. But that’s a bad game move. He definitely had some strategy in his choice, it just didn’t play out for him that way. But Paulie definitely cast that vote to smooth things over for his brother. You won’t convince me otherwise.

As far as finale’s go, this was mega-exciting. How they got Plutarch Heavensbee out of The Hunger Games to design these final challenges, I’ll never know. I mean houseguests in cat costumes chasing a laser pointer around bowls of milk and giant couch cushions? Brilliant. It actually feels harder in some ways endurance-wise to switch platforms in intervals than to just stay on one thing for hours at a time. And then that second part with the roller coaster. If that was an actual ride at an amusement park, I would wait at least an hour and fifteen minutes to get on the BB Rollercoaster for sure. Even if I only got to get my picture taken with Glenn, Bronte, and Michelle.

Speaking of Michelle, she cried during the jury deliberation which is par for the course for her. But the look on Dr. Will’s face when it was happening was so perfect. I really wish instead of the clip show ep, which they paired down somewhat this year but still made, that they had a whole episode of jury deliberation with Dr. Will. Feels like we only see a small part of the back-and-forth. It might give away too much of the final vote but that’s okay with me. Most years aren’t as close as this one and it looked like this came down to the final moments.

Another year, another winner. Nicole played a good game. New season starting next week. Paul will be fine. He seems like he will have lots of opportunities after this. Victor won the night with his vote speech about people being afraid he’s going to come back into the house. And also, he got America’s Favorite Player. I really do love this game. 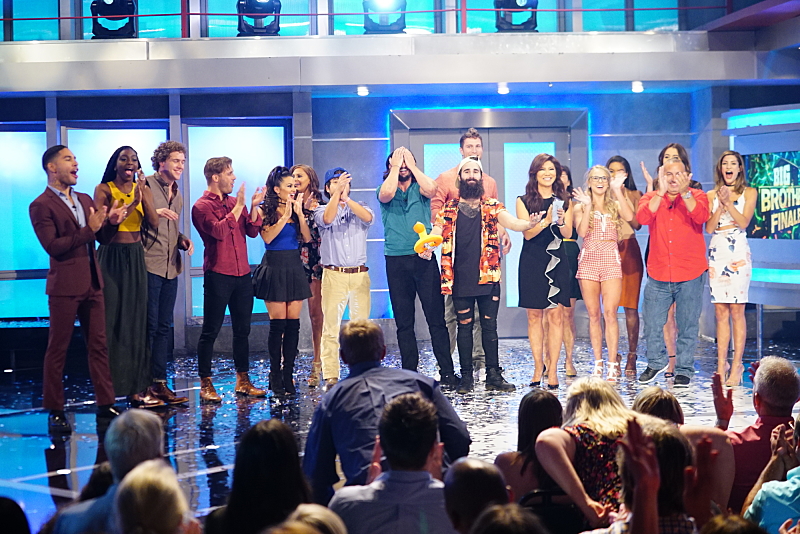