We’ve just wrapped up the second-to-last week of Big Brother. There are only two episodes left! Normally, I’d be anxiously awaiting finale night in a combination of excitement and despair. We’re down to the final 3 and we’re going to know who this season’s winner is in less than a week! Whoever wins Big Brother is my President for the year so there’s actually more at stake for me than in November. But there’s a dread that comes with finale week. The season is almost done and then no more Big Brother. But this is the most hopeful year of all. Because once this season ends on September 21st, we’re only a week away from the CBS Access exclusive season that’s starting on September 28th. If there is only one week a year without Big Brother going forward for the rest of my life, I will have lived to the fullest. I hope when I’m on my death bed, seasons of Big Brother flash before my eyes instead of things of done.

The other amazing thing about there only being two episodes left this year is that it probably means they can’t do a full “sit around and recap the season” episode which is my least favorite ep of the year. Perhaps the Ziggy Marley backyard carnival, canned dialogue and awkward segue “hey there sure are a lot of pies here in this carnival and you know what else there was a lot of this season is drama!” episode took the place of the “finale week, final dinner with a bottle of wine and reminisce” show. That would be good. I would support that.

Last week there were three couples in the final six. Now we are down to the final 3 and there are zero couples. When this season course-corrects, it doesn’t play around. Natalie left last week after finding out that showmances are in fact very real. She didn’t think they were real. I think they’re real. I think they’re super freaking real. I think showmances are the most real love that there is, even more real than the song Real Love by Mary J Blige. I think if Lester Bangs were writing about Big Brother today he’d be like “the only true currency in this bankrupt world is what you share with someone else when you’re uncool…or in a showmance.”

The Sitting Ducks alliance of Paul and Victor was broken up when Corey came into power after winning that BB Slide-In Theater comp, which by chance is also what I call my Twitter DMs. Corey was sweating his nominations and couldn’t sleep so he decided to clean the house. I’m pretty sure Corey probably has some level of ADD or OCD so the edit they gave him was kinda creepy. They made him look like that scene in Requiem for a Dream when Ellen Burstyn is on diet pills and cleaning her apartment in fast motion and Jared Leto comes over and is like “ma, you on uppers” but he has an accent so he says “uppahs” instead. Nobody in real life should ever look like anything from Requiem for a Dream ever if they can help. Corey also looked like that scene in Something About Mary when Magda takes the drugs meant for her dog and starts vacuuming her whole place and like picking up couches by herself. It’s ironic that the two things that Corey reminded me of were older women because Corey is in fact a 12-year-old boy who found the fortune teller from the movie Big and wished to be big and then became big and went on Big Brother.

Corey cleaned the house and then nominated Victor and Paul because “his mama didn’t raise no bitch” which has to be one of the strangest things you can say about your mother on live television. They needed to get Victor out because Victor has been already evicted twice and keeps coming back in. Plus, Victor is kind of extra handsy on Nicole. Like they never showed it bothering Corey but the constant hugging and picking up and kissing on the hands was super extra. I wouldn’t want to live with someone who was always doing that to me. Vic was mad because people were lying to him which is crazy as you are playing a game where basically the best liar wins. I mean even Derrick, who won pretty honestly was lying about things the entire time and just didn’t get caught. Lying is an asset here, not a character flaw.

Vic leaves and Paul is left alone but he wins the next HoH. They took dialogue from the houseguests and bleeped out a word. Then Julie gave them an option and they had to say True or False. But the reason it was great was because every time something is bleeped your brain basically fills in the gap with some version of the f-word so it sounds like they’re cursing on CBS but they’re not. They basically stole the Unnecessary Censorship bit from Jimmy Kimmel and made it into a competition. Paul put up Nicole and Corey as revenge and Corey went home. Now it’s the final 3: Paul, James, and Nicole. If Paul makes it against one of them and doesn’t use the “I would do better if I got to play twice, too” line in his speech, he’s missing out.

The jury house is a mess because Paulie has decided to embrace his role as least-likeable Calafiore brother. He’s fighting with Da and making Bridgette’s skin boil and rocking the worst haircut of the whole season. Seriously, how are you on a season with Frank and Paul and you easily have the dumbest haircut of all? It’s amazing to see the makeup of the jury house, with six women and just Paulie. At least with Victor, there will be another guy. Derrick said he thinks we’re overdue for a woman so maybe Nicole will take it. I think from a game perspective, James has the weakest case but everyone really likes him so that can go a long way. I’d like to see someone new win, so Paul, rather than a returning houseguest but that’s just me. We’ll find out next week! The HoH comp starts tonight (Friday, September 15th) and the finale is next Wednesday, September 21st. 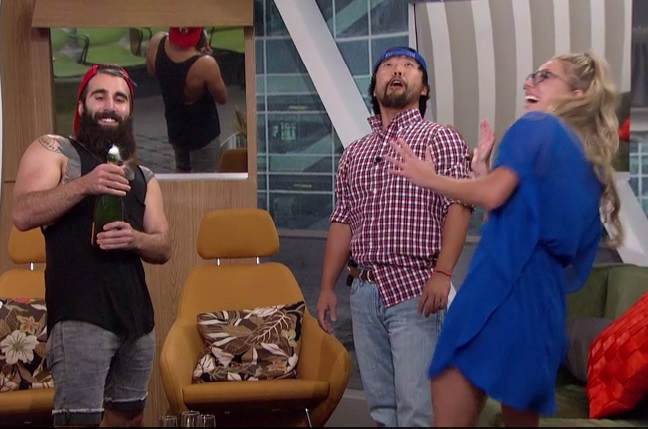