Here is the problem with playing the “I’m gonna shoot you straight” strategy of Big Brother. Aside from informing the decisions you make, the way you run your own game tends to manifest in the way you look at the other houseguests. This week is the perfect illustration of this. Nicole and Corey, in a temporarily great position with the HoH, veto, America’s Care Package and tie-breaking elimination vote. Nicole not only won the HoH, she got James to drop out of a competition he absolutely could have won. He’s the Wall Endurance Comp Champ like Noreaga is the Drink Champ. And if he really did want to bring Natalie and Meech along with him, which he seems to have wanted, then it’s too late in the season to be giving away victories for non-strategy reasons. “I want a letter from my mom” isn’t a good enough reason. “I gave it to Nicole to solidify our alliance” is a slightly better reason but still not ideal and totally risky.

Nicole has been real slippery this season, sneaking around with information at key times, like with Da’Vonne, Frank, and Paul. I’d give her credit for it except she keeps getting caught. However, the fact that she keeps getting caught and has made it this far into the game does deserve props. She plays a backstabby game and so therefore she doesn’t trust Victor to be on the up-and-up with her. You can’t trust anyone in Big Brother, that’s a fact. And Paul and Victor tried a scheme last week where they faked a falling out to try and save Vic. It didn’t work. So at this point, it’s pretty certain that Victor and Paul are ride-or-die like a Ruff Ryder compilation album. Still, Nicole and Corey’s paranoia leads to Corey using his $5,000 bribe on Victor to make sure he votes for Paul to stay. Again, this isn’t a terrible game move. Victor and Paul took it like they were solidifying their alliance. It worked out. But Nicole and Corey kind of stumbled backwards into the result they wanted. The thought-process that got them there was reflective of their gameplay. They gave Vic $5000 to do something he was already going to do and they always had the option of Corey giving it to Nicole for breaking the tie the way they wanted or whatever other game reason they concocted to put money into her pocket.

On the flip side, James considers himself to be a straight shooter. He’s “bounced checks” in the house, meaning he’s lied to someone for strategy purposes but he views that as an outlier in his gameplay. So the fact that he made a final four deal with Nicole and Corey days or weeks ago means that he expects them to live up to that. He doesn’t check in on it. He doesn’t try to keep Victor and Paul away from the two people who have all the power in the house. And he doesn’t even entertain the idea that when the four of them are up in the HoH without him, Natalie, and Michelle, that they could be talking game instead of sharing real life stories. James is like the dad from Stranger Things who is literally wrong about every single thing he’s sure about. He’s like “umm if there was a child staying in our house, we’d know about it” and in the meantime there’s a tent pitched in the basement and you’re all out of Eggo waffles. That was James gameplay this week.

I’m not putting all of the blame on James. Big Meech the superfan deserved to be evicted. She had a feeling she was the target and did nothing about it except for a few under-the-covers breakdowns. Look, the house is hard. It sucks being in there for that many days. Not everyone is built for it. You have every right to lose it. If the live show decides to throw it into your edit, that’s a risk you take by going on the show. I’m not going to pick on her for being human. But she made the major mistake of thinking “Nicole and Corey aren’t talking game” when the reality was “Nicole and Corey aren’t talking game with you.” So not the same thing and she should’ve known that.

Michelle was good at stirring the pot. She got into with Paul before last week’s eviction, which ended in Paul losing his cool with her. The live show bleeped out what he called her, which is expected. But they also bleeped out the letter when she said “you just called me the *blank* word.” How are we supposed to use context clues to figure out what Paul said if we don’t even get the first initial? There are a lot of words! Anyway, it was the “C” word, which was not cool, Paul. I will miss Meech’s ability to get people riled up and I’ll also miss her crying over the strangest things like not getting to hang out with Frank in jury. She also seemed to like to chew on hangers. And give semi-coherent speeches that tried to call people out. She did that again as she was leaving the house. Oh and she also grabbed Paul’s duck float right as she walked out the door and threw it into the audience. At least she didn’t try to sell it on eBay.

The house is down to three couples now. James and Natalie. Nicole and Corey. And Paul and Victor. Paul and Victor are stuck with each other which is kind of great for the content they produce. Their “what is girls?” segment was a highlight and I can definitely imagine Paul using that “you’re garbage, I’m garbage, so let’s be trash together” line in real life. Paul says words that don’t make sense on their own but somehow come together when they come out of his mouth. It’s truly a gift. Like in the veto when he guessed the number of vegetables and was like “fool knows his carrot.” Does that sentence ever make sense in any other context from any other human? He got nominated for the fifth time and shouted “Mambo Number 5!” This dude has Lou Bega references.

Down to the final six here, this is where the game starts to get really interesting. Can Vic win after being evicted twice? Maybe, as long as he remembers to visualize. I guess anything is possible. It feels like even Natalie could win at this point. Nicole is making game moves. Corey is using strategy to help win vetoes? Truly, we are in for it as this season closes out the next few weeks. Fool knows his carrot. 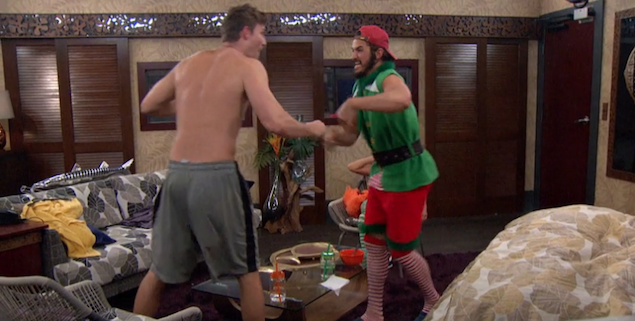