NASA is set to announce a “surprising” discovery on Monday made by observing Jupiter’s moon Europa with the Hubble space telescope. No, the discovery is not aliens—not just yet. Although, consensus among scientists and researchers is that beneath the moon’s sheet of ice, is a massive saltwater ocean that could be the best bet for finding extraterrestrial life in our solar system.

Bill Nye is one of the most outspoken members of the scientific community and an enthusiastic advocate for exploring Europa.“I want to, in my lifetime, discover life on another world if it’s out there to discover,” said Nye in a talk at Kennedy Space Center earlier this month.

“I love Europa, who doesn’t? It has twice as much seawater as the Earth. Let’s go!” hyped the ‘Science Guy,’ who took a break from prepping for his new Netflix show, helping President Obama tackle climate change, and savagely schooling religious ideologues, to show up at NASA and blow everyone’s minds.

As the CEO of The Planetary Society, a non-profit space exploration advocacy group, Bill Nye’s job is to do exactly what he’s been doing for years: convince the world that science and space exploration can benefit humanity. “We advocate for Europa,” he said on behalf of the organization. “Everybody needs to realize what’s at stake when you have twice as much seawater as the Earth for 4.5 billion years. Are there Europanian fish people swimming around under the Ice? That would just be amazing to find that out.”

That may sound a little out there, but even Bill Nye’s fellow space communicator Neil Degrasse Tyson has said he’d like “to go ice fishing on these icy moons of Jupiter, especially Europa.” Both men, at one point in their lives, were personally impacted by the late Carl Sagan—considered one of the most potent voices in promoting space exploration.

“Life as we know it, thrives on liquid . Earth is in the habitable zone or ‘goldilocks’ zone of the Sun but Jupiter is not. Yet, its moon Europa, which is icy on its surface, is kept warm by the gravitational stress that Jupiter brings to bear on it,” said Tyson on StarTalk radio.

Even politicians are excited about Europa. Texas Republican John Culberson (who Bill Nye jokingly calls his “best buddy in the world”) is a proponent for exploring the watery world and happens to be the chairman of the House Appropriations subcommittee that oversees NASA’s budget. For the past three years, Culberson has helped increase the agency’s funding for investigating Europa by $350 million. For 2017, NASA requested $49.6 million but congress appropriated $260 million.

“The Planetary Society advocates strongly for a series of missions to explore the surface of Europa and then under the ice,” repeated Nye. He then suggested that NASA’s Space Launch System and SpaceX’s Falcon Heavy would make ideal rockets for launching probes toward Jupiter.

NASA has given their teams at the Jet Propulsion Laboratory in Pasadena, California the go-ahead to plan a mission for sometime in the 2020’s that will see a spacecraft arrive at Jupiter and orbit the planet every two weeks. This would allow for multiple “flybys” of Europa (the agency wants to do 45) which will enable scientists to photograph its surface and study its composition.

“Observations of Europa have provided us with tantalizing clues over the last two decades, and the time has come to seek answers to one of humanity’s most profound questions,” said John Grunsfeld, associate administrator for NASA’s Science Mission Directorate.

Regardless of the mission being planned, Bill Nye seems worried about the political climate affecting NASA’s future exploration. “I don’t know if you heard about it, but there’s a presidential election coming up and this has been an unusual one. There will be a new administration and one thing we advocate for very strongly is not reset. Do not erase everything that has come so far, which has happened several times over the last 20 years,” Nye explained. “Play the hand you’re dealt.”

Encountered @BillNye while reporting for @observer at @NASA. He has a message for @HillaryClinton @realDonaldTrump: pic.twitter.com/pQFStfLy6a

As for NASA’s announcement scheduled for Monday at 2PM ET, chances are it’s a follow up to findings made by Hubble in 2013 that show evidence of vapor being vented through Europa’s surface. Monday’s press conference could finally announce a confirmation that this activity was caused by liquid plumes and help further prove that Europa does in-fact have a vast, unseen ocean.

You can listen to the media teleconference being hosted by NASA on Monday at the link here. Special thanks to Sawyer Rosenstein of Talking Space for providing the audio of Bill Nye’s talk. 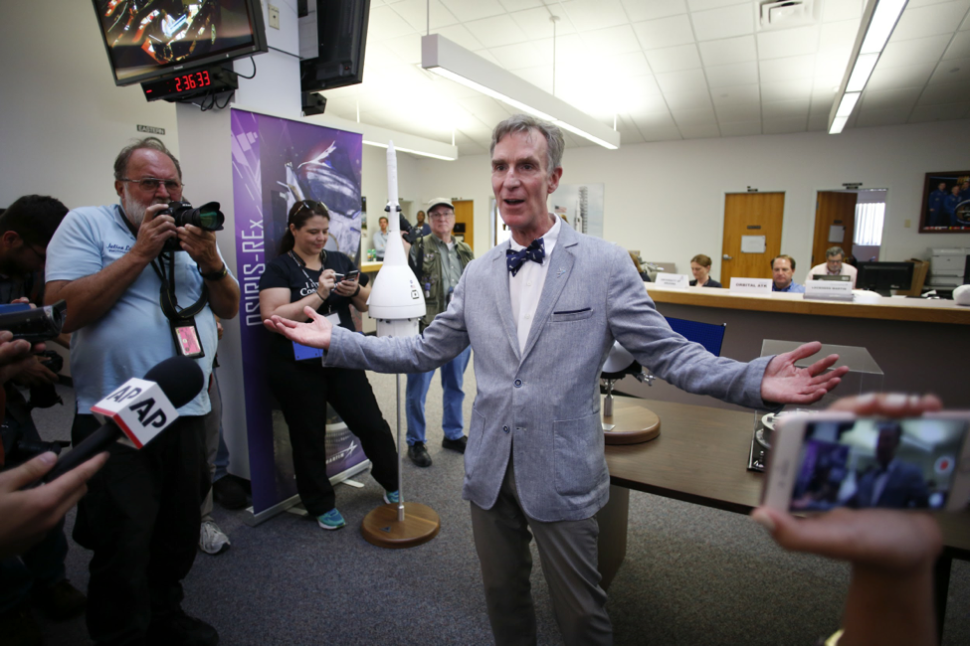