The burkini is suddenly making waves. Press coverage of the French ban on the modest beach attire worn by Muslim women rivals media attention given the advent of the bikini—its polar opposite—back in the 1950s.

We are witnessing a clash of cultures on the beaches and in the courts. The dialogue is forcing non-Muslims to consider issues of modesty that are honored by Muslims worldwide. And it is forcing the Muslim community living in Western societies to confront their own issues of public space and democracy in the non-Muslim world.

The exchange is exciting—and positive.

Sex and sexuality sells in today’s media world. Wearing the burkini hits right in that sweet spot, especially because sex is a symbol of freedom. Muslims covering up in a burkini supposedly serves as a rejection of modern values of freedom. And yet—covering up is not so bad. Remember when the bikini was illegal. An essential challenge confronting our society is learning how to balance the role of tradition in an ever-evolving society. All that is new is not better and all that is old is not wiser. The burkini and the bikini are perfect examples of this tension.

The burkini is worn to preserve modesty in a place where immodesty rules. The Koranic interpretation of modesty is based on two quotes, both from the Prophet Mohammed. Interestingly, though modesty is implied in the quotes.

The Koran, in Surah 33:59, reads, “O Prophet! Say to your wives and your daughters and the women of the faithful to draw their outer garments close around themselves; that is better that they will be recognized and not annoyed. And God is ever Forgiving, Gentle.”

The second text, from Sura 24, goes into further detail. It stresses the importance of a woman revealing her body to her husband and family only.

The idea of modesty in Islam is called namus. For obvious reasons the word namus is often translated as honor, but that translation far from explains the depth of the idea and its reverberations throughout Muslim life.

Wearing a burkini has now taken on not only a religious mantle but a political mantle, as well. One of the most popular Olympic sports is Beach Volley Ball—once called Bikini Volley Ball, has an impassioned following. An interesting story unfolded during the Rio games.

A competitor from Egypt, Doaa Elghobashy, wore a burkini during her match. The game was covered in several Western media outlets, but for the most part, it didn’t receive much coverage (no pun intended) at all. The Arabic press, on the other hand, embraced the story. This Egyptian woman became a symbol of Muslim modesty and an image of honor. Here she was, competing in this risqué game of volleyball, surrounded by heathens from around the globe, while maintaining her modesty and dignity.

Shortly after returning home, a photo of the idolized Egyptian competitor hit the Twittersphere. Someone had taken a selfie, probably one of thousands, with Elghobashy. But the person in this selfie was draped in the Israeli flag.

A firestorm erupted throughout Egypt and the Arabic world. The Olympian who had earlier been called a heroine and role model was now vilified. Elghobashy claimed that she was unaware that her image was being captured on that photo and that she was exploited. Maybe she was unaware. Maybe she was fully aware and was embracing the Olympic ideal of sportsmanship and universality.

Today, the bikini is ubiquitous. We see it and we think nothing of it. Isn’t it interesting that we give more thought and more ink about people who cover themselves up at the beach than to those who don’t.

The history of bikini-wearing was as fraught with controversy as the burkini is today. On June 5, 1946, by a French mechanical engineer named Louis Reard unveiled his new invention. He named it the “bikini” after Bikini Atoll, an Island in the Pacific Marshall Islands, where four days earlier, the U.S. had begun their nuclear weapons test.

In Marshalese “Bikini Atoll” means “The Place of Coconuts.” That’s not really the effect Reard was going for. He was more interested in the explosive, bomb-like, reaction his invention would receive. For a short time, the bikini was actually renamed “Atome” as in atom bomb.

At first, bikinis were prohibited from being worn on beaches and other public places. Only after A-list stars—among them Rita Hayworth, Lana Turner, Liz Taylor—wore them did the tide change. Then Frankie Avalon and Annette Funicello and their now famous Beach Party movies came along and bikinis were transformed into acceptable, even coveted, beach attire.

The burka has a long history in the Muslim world, coming into fashion so to speak in recent years, as oppression has reigned in many Arab lands.

France officially banned burkas from schools in 2004. In 2010, France’s Senate overwhelming banned wearing burkas in public claiming that seeing a woman’s face was an essential security concern. Interestingly, Egypt banned the nikab, the facial cover of the burka, in many parts of society, especially in schools and universities. There is a draft bill on the nikab being discussed nationally.

Mohammed Sayyid Tantawi, the most respected sheikh and scholar of Sunni Islam, is also the head of the largest Muslim university in the Arab world. There are thousands of lower schools connected to him and his al Azhar Islamic University. On October 23, 2009, while visiting one of his schools for girls only he demanded that an 11-year-old wearing a nikab remove the face covering immediately. His reason was “this is only a custom and has no connection to Islam.” When the word “custom” is used in this context it means a borrowed pagan ritual. Four days later Tantawi’s al Azhar Supreme Council forbade the wearing of the nikab in all of his schools, from elementary to high schools and universities.

Burkinis and bikinis, literally and figuratively, at home and around the world, prove explosive. 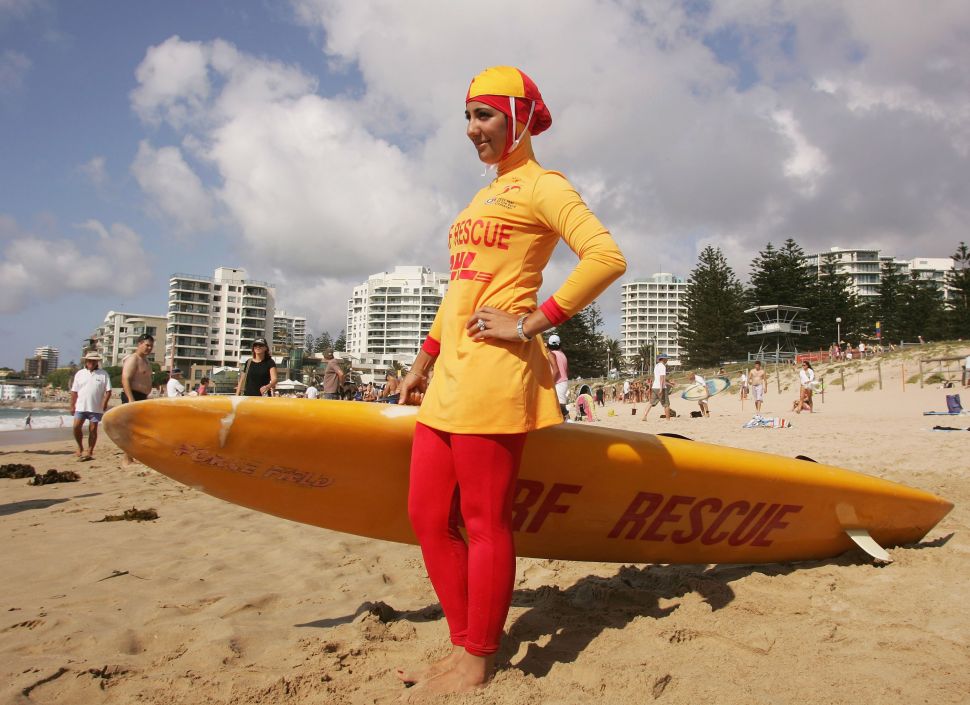