Senate Minority Leader Harry Reid will retire before next year, meaning New York Sen. Charles Schumer will likely be the top Democrat in the United States Senate come January. In order to secure this lofty position, Schumer is busy spreading the wealth from years of dubious campaign contributions as a means to buy support from fellow Democrats who have the means to grant Schumer the power he desires. Politico reported on September 20 that Schumer has transferred $6.2 million from his campaign cash on hand to various Democrats in order to assist their upcoming election bids.

Given Schumer’s record advocating for Wall Street and tax breaks for the top one percent, working and middle class Americans should be alarmed. Further, the country should be wary of how much further into oligarchy Schumer’s leadership—coupled with Hillary Clinton and Tim Kaine in the White House—will take the Democratic Party.

In July 2015, Schumer teamed up with Sen. Rob Portman to propose giving multinational corporations a massive hand-out in tax breaks. The current standard corporate tax rate is 35 percent, which multinational corporations have avoided paying by claiming profits are earned in overseas tax havens. Schumer and Portman advocate imposing a tax earned outside of the country at a much lower rate—at least lower than President Obama’s proposed 14 percent.

“The obvious consequence if the Schumer-Portman scheme becomes law is that businesses based solely within the U.S. would be at a permanent disadvantage,” wrote Jon Schwarz for the Intercept. “Multinationals could earn profits in the U.S., get their armies of lawyers and accountants to make these profits appear to have been ‘earned’ in the Cayman Islands, and get taxed at the overseas profit rate. Meanwhile, purely domestic companies would either have to pay the higher domestic rate, or turn into multinationals themselves.” Essentially, Schumer wants to grant multinational corporations a permanent tax holiday.

Schumer’s modus operandi in the Senate has been to favor Wall Street over his constituents. In the wake of the 2008 economic recession, Schumer attended fundraisers with finance executives, pushing against efforts to regulate the industry. This included helping kill a progressive bill, with some bipartisan support, to break up big banks.

Wall Street rewarded Schumer, with 15 percent of their Senate donations in 2009 going directly to him—nearly twice as much as any other senator received. Under Schumer’s leadership of the Democratic Senatorial Campaign Committee, donations from Wall Street to Democrats increased by 50 percent as he led his party’s efforts to deregulate the financial industry. While progressives like Sens. Bernie Sanders and Elizabeth Warren were building a coalition to rein in Wall Street over the past decade, Schumer served as one of its biggest congressional allies.

Hillary Clinton has received significant criticism for her ties to Wall Street, learned it at Schumer’s knee. Clinton has yet to release transcripts from the speeches she gave to several financial firms, despite being pressed to do so. She has received millions of dollars in campaign and Clinton Foundation donations from the industry. And while Clinton was a New York senator alongside Schumer, her policy was laissez-faire when it came to Wall Street, just like his. Under a Clinton presidency, Schumer’s promotion to senate minority leader, and possible majority leader if Democrats are allowed to recoup majority, is likely to replicate this dynamic.

Sanders’ candidacy and populist rhetoric railing against the greed of Wall Street pushed Clinton to advocate for Wall Street reforms more boldly than she had in the past. But, as Bill Clinton’s former Secretary of Labor Robert Reich has explained, these reforms don’t go far enough.

“Hillary Clinton doesn’t want to resurrect Glass-Steagall and does not want to bust up the biggest banks,” Reich told the Observer earlier this year. “Unless you are prepared to do that, the danger to the entire financial and economic system is simply too large. Her proposals contain some good ideas but they don’t go nearly far enough.”

With Schumer as the top Democrat in the Senate, and pro-Wall Street Tim Kaine as her VP, Clinton is likely to put financial reform on the backburner of her agenda as president. Then fixing Wall Street will be relegated again to the agenda of a few Democrats on the progressive fringe of the party who will continue trying to push it forward. 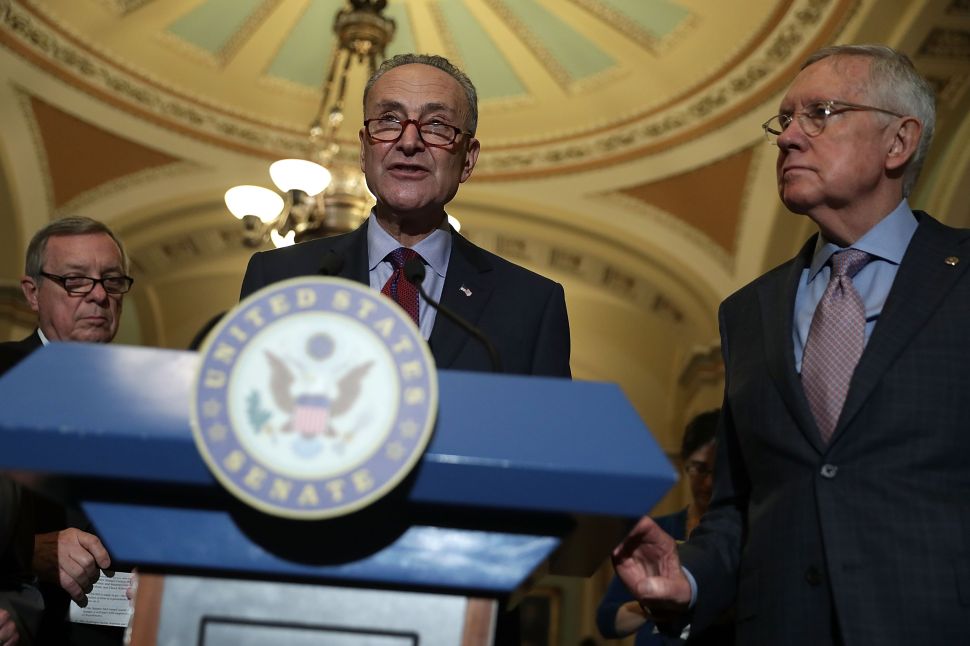