Another entry in the “What makes an American hero” sweepstakes, Clint Eastwood’s excellent if cinematically familiar Sully, enhanced by another captivating and dedicated performance by Tom Hanks in the title role, is a well-made tribute to Capt. Chesley “Sully” Sullenberger, the pilot who saved the lives of 155 people aboard U.S. Airways Flight 1549 from New York to Charlotte on January 15, 2009, when birds caused dual engine failures only minutes after leaving LaGuardia Airport, forcing the pilot to land the plane in the icy waters of the Hudson River. It was an emergency decision that catapulted Sully into the headlines. He was an instant hero, praised by the news media and exalted by the surviving passengers and crew and a sensation on Letterman. But Sully’s nightmare was just beginning.

With typical biased hysteria, television reporters turned a normal news story into a feeding frenzy, hoping to propel a happy ending into another potential 9/11 tragedy, accusing Sully and his co-pilot Jeff Skiles (well played by Aaron Eckhart) of reckless endangerment and goading the airline and its insurance company to launch a federal investigation. (“Hero or fraud?” barked Katie Couric!) Eastwood’s “opening up” of that story includes tense hearings by the National Transportation Safety Board that threatened to destroy Sully’s career and jumps around in confusing time sequences that wreak havoc on the viewer’s concentration. From the dangers of the Hudson, with its 36-degree temperatures and a wind chill of -5 degrees, to what the rescue efforts looked like from the viewpoint of eyewitnesses on ferries and first responders on helicopters, Todd Komarnicki’s screenplay gets all the facts down without adding much artistic license for dramatic impact.

But the fact remains that no matter how many flashbacks Eastwood uses to flesh out Sully’s background (he began his craft as a kid, practicing with crop dusters) or how many times he cuts to the anxiety the pilot’s family endured while he was defending himself publicly, we all know how the story turns out. The deafening noise of IMAX emphasizes the cacophony of the plane crash and the revved up engines, and Tom Hanks does an admirable job of showing Sully’s humiliating stress while his reputation was being challenged, with the first-rate support of a cast that includes Laura Linney as his wife, and Jamey Sheridan and Anna Gunn as his surly inquisitors. But the most moving moments in Sully occur in a coda that introduces the actual passengers and crew who lived through the experience and Sully himself. No movie defines heroism with the same impact as reality itself. 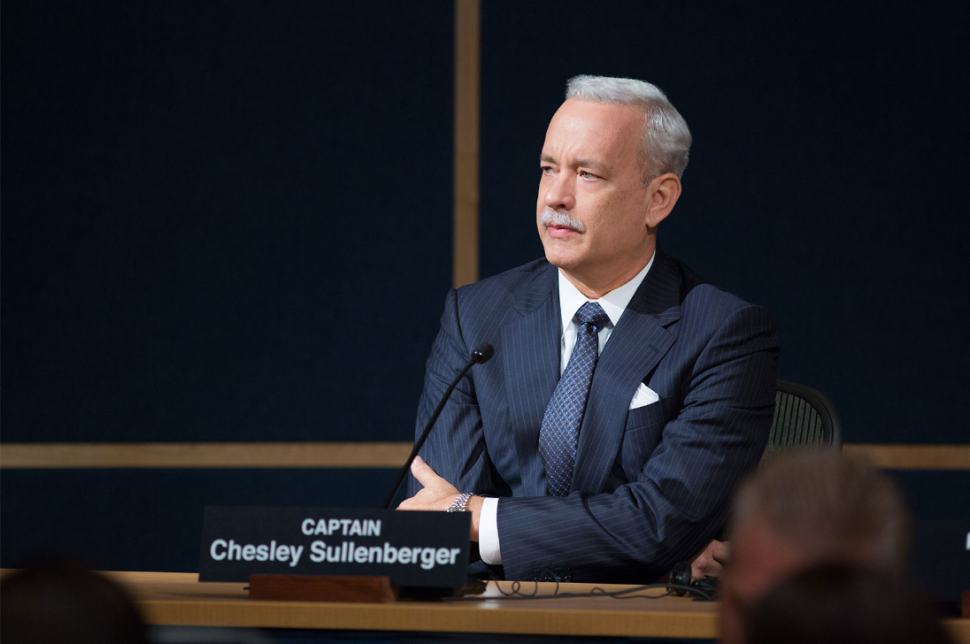