The pundit class—and now Clinton’s campaign—has been talking about the “low bar” being set for Trump, and how he pretty much just has to string a few coherent sentences together to beat expectations and look like a winner. Clinton, however, will have a much higher bar, and simply talking about policy isn’t going to help.

Clinton can speak coherently about policy all day long, and people will tune out. When it comes to debates—especially the general election debates—people remember soundbites. Clinton is going to be facing a reality TV star, a man who knows how to provide memorable soundbites. Just think about how much we repeat—whether sincerely or in jest—Trump’s campaign slogan of “Make American Great Again.” What’s Clinton’s slogan now? “Stronger Together”? Yawn.

And think back to previous presidential debates, like in 2012. What do we remember? “Binders full of women” from Mitt Romney and President Barack Obama’s “The 1980s are calling, they want their foreign policy back” joke. The “binders” line was bad for Romney (unfairly bad, but bad) and the 80s joke was positive for Obama (although given what’s going on in the world now, Romney was right). It doesn’t matter; that’s what we remember.

Trump is going to give viewers a show. He knows how to play to an audience and I expect him to do just that. Clinton is… not good at that, if her latest appearances are any indication.

She appeared on comedian Zach Galifianakis’ show “Between Two Ferns.” The segment was funny, but no thanks to Clinton. She just sat their shaking her head and laughing at Galifianakis’ jokes, only occasionally chiming in. Conversely, when Obama went on the show, he had some jokes prepared and managed to get people to sign up for Obamacare afterwards.

All anyone is discussing from Clinton’s appearance are the funny things Galifianakis said or how the show identified Clinton in her chyron as “had pneumonia.”

Now, obviously, Clinton talking about policy is more substantive than Trump palling around with King, but one of those things is going to get the candidate crucial media attention and one is not.

Clinton has gone on Kimmel’s show in the past and managed to be a little humorous. She opened a jar of pickles to prove she doesn’t have health problems (this was before she lost consciousness at a 9/11 event). It also speaks to either laziness or bias on the part of Kimmel, as other comedians have been able to make jokes about Clinton’s numerous scandals.

Galifianakis worked in a sly joke about Clinton’s emails when he closed the interview, saying: “We should stay in touch. What is the best way to reach you? Email.” Clinton just stared at him.

Clinton’s going to have to work hard at this debate to not show frustration with her flailing poll numbers. In a video released this week, Clinton is seen angrily answering the question of why she’s not ahead in the polls by 50 points. Seriously, Clinton seemed like she was just a few seconds away from becoming Kate McKinnon’s SNL parody of her, forcefully saying into the camera: “Citizens, you will elect me. I will be your leader.”

It’s more likely that Trump will be prepared with zingers (or be able to come up with them on the fly). Clinton is going to have to figure out a way to not only give a substantive, presidential performance (without coming off as being angry about her own poor polling performance), but also a memorable one. 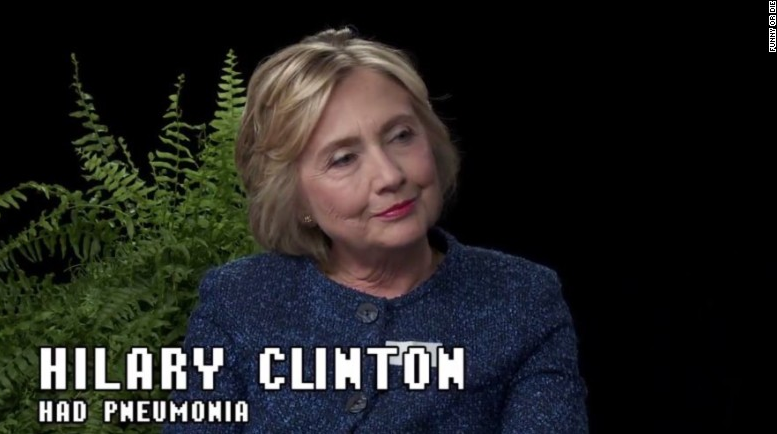