As sculptors go, few have altered our experiences of contemporary cities more than Anish Kapoor. The London-based artist’s massive public pieces essentially adorn the planet, seated in settings from the Palace of Versailles to New Zealand.

But if you’d like to see a smaller (in both intellectual scope and in literal terms) body of work by the ultra-famous artist—whose success is evident not only from his massive output but also from the fact that he is estimated to be worth more than $100 million—you can currently take in his series of mirrored “twists,” and the three-dimensional paintings in his Gathering Clouds series, at the eponymous show on display at Kukje Gallery in Seoul.

In two of Kukje’s three galleries, which perch elegantly on a hill in a part of the city that has recently grown a litter of contemporary art galleries, his works alternately gleam or pull in the surrounding light.

The twist works are new; he has been at them for a few years now, he told a small group of reporters over many courses, including tuna tartare and sea urchin, at the gallery the day before the show opened. He had rushed from his plane to the gallery but arrived with his partner, his former studio assistant turned “conceptual gardener” Sophie Walker, with plenty of time to describe the recent works to the alert if slightly skeptical ring of international journalists.

“I am deeply interested in geometry and the fact that geometry, while it is completely known…in certain forms becomes unknowable,” he said. This shift is the crux of the twist works. “By taking a form and turning them through 90 degrees over a vertical height, they become something else. That twist always leads to concavity. And my deep interest is in concave, mirrored forms,” he said. “At one level this is a simple, stupid idea.”

Yet these are the themes he has long been consumed with.

“Small shifts are enough,” to make something interesting, he added. “In other parts of my practice, I like that there’s a lot to say. This is, in a way, a body of work in which there is not so much to say and it doesn’t matter. One has to grow up as an artist and learn not to say too much.”

The Gathering Clouds works, from 2014, are similarly understated, if not literal understatements, if that is possible. “They are just different grays,” he said, of the circular, matte pieces, rendered in barely distinguishable hues. The gray renders the shape unknowable, to some degree. It’s not clear how deep the concave inlet goes.

Kapoor said these works were the result of a challenge he made to himself: “Gerhard Richter made a whole series of works out of gray paints. Is it possible to do it again?”

And despite this and other gallery shows currently holding his focus, he rolled back his statement, made last year to the Guardian, that the very notion of public art—largely how he made his name—now bores him.

“I said that in a very particular context,” he explained. The context being the gigantic kerfuffle over Dirty Corner, a site-specific, nonpermanent piece in the gardens of the Palace of Versailles, which looked to many like a vagina. Of course, Kapoor has already admitted his abiding interest in concavity.

“No one makes the slightest noise about another phallus on the horizon, but it seems a vagina is really a problem,” he noted, adding that he never actually said the sculpture was meant to evoke the female genitalia. All he did, he said, was call it “her.” Following outrage, the sculpture was vandalized repeatedly, and after a labyrinth of bizarre legal proceedings, including those that found Kapoor, who is half Iraqi Jewish, guilty of hosting anti-Semitism, he compromised and covered the work entirely in gold leaf.

Still, he liked that the piece—and the discussion—brought “some disorder to those perfect gardens.”

He also weighed in on another controversy that has dogged him of late: his exclusive right to the nanosubstance known as Vantablack, the “blackest black” known to humanity. (Blackest except for, as Kapoor later offered, in such a way that I’m fairly sure he’s said it before and the on-the-nosedness may be calculated for effect, “the black we carry inside ourselves.”)

He tried to disabuse the assembled press of some misconceptions about the material, which he is developing with the company Surrey Nanosystems.

The black, which he read about in the paper and immediately thought “this is for me,” is a series of tubes that essentially strip light from the world. Manufactured for use masking stealth airplanes and in telescopes, Kapoor said the creators hadn’t thought about the visual implications of the black until he called them up. Given his interest in “void forms,” he had to know more about a color—it’s not a pigment, mind you—that traps light. “Quite a good story, right?” Kapoor asked. He said the mythological quality of this black interested him almost as much as the aesthetics.

I asked later just how the story had been misreported. He explained that the development of the black as a useable substance, out in the world, is still ongoing, and he is at work on it “in collaboration” with Surrey.

The practical use of the black in its truest form is a ways off. “It needs…an incubator and a furnace…both heat and pressure,” Kapoor said, to exist in its, well, blackest form (outside your soul, that is).

Later, Walker pointed out that since the color only exists in a incubator and must be made in a sort of reactor, the next step is figuring out how to even display it. “It can’t be touched,” for now, she said. The nanotubes—only a few microns thick—are too delicate, though they are utterly dust resistant.

The experience of seeing the black is very emotional, they both said. “It’s this weird thing about black,” he said. “It’s literally as if you could disappear into it.”

“This stuff works when you look at it…at a side glance,” meaning it cannot reflect light from any angle, in any way. “But…we’ve got work to do,” to make the material applicable, Kapoor said. At the moment, he only has about 2 square inches of the nanopaint.

Still, the goal of creating the blackest black (again, besides the one in your heart) is understandably a long-term one. Kapoor’s role in developing the color is essentially that of cheerleader. “It’s necessarily a collaboration in that I’m saying, ‘Come on, guys. We can make it bigger,’ ” he said. Because of his role in the black’s deployment, he maintains that he should hold the exclusive rights to the color, despite the objections of other artists.

Later, as we departed the gallery, he admitted he had failed to answer my question properly. Well, “you can answer it now,” I suggested. He looked at me briefly, gave me a friendly but silent hug and walked away. 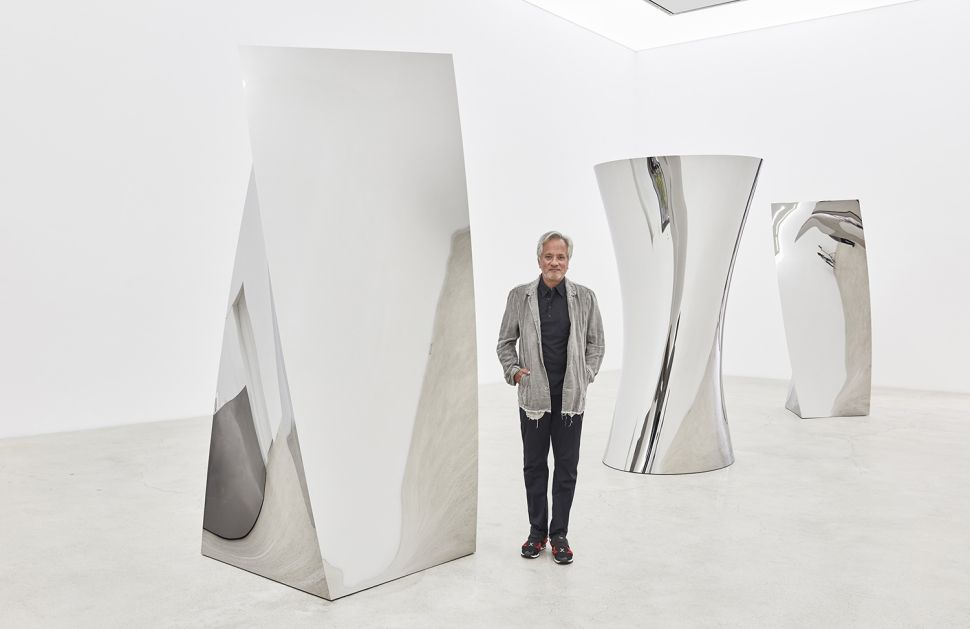