Council Speaker Melissa Mark-Viverito said that it is the mayor’s responsibility to be “proactive and engaged” with Council members if he wants to see a particular development project go through.

Mark-Viverito said the onus is not on the Council to win local support for Mayor Bill de Blasio’s favored affordable housing developments—the administration and the Department of City Planning have to be able to explain to each neighborhood why a project “is in their best interest and why they would like to see a favorable vote,” she argued.

“The mayor and the administration need to focus on being proactive and engaged with Council members in their districts and in the communities that we represent to make sure that information is being arrived at in the most transparent way about what the project is and what it seeks to do,” Mark-Viverito said at the Council’s monthly pre-stated meeting. “That needs to happen.”

The comment came shortly before the Council voted in favor of the “La Central” mixed use development proposal in the Bronx, which will contain nearly 1,000 units of affordable housing—seen a victory for the mayor’s Mandatory Inclusionary Housing proposal, a key part of his affordable housing plan. Key to La Central’s success was the support of local Councilman Rafael Salamanca, as the Council typically defers to the decision of the resident member on land use decisions.

It also followed the defeat of the Sherman Plaza proposal in Inwood, which the Council voted against after the local Council member, Ydanis Rodriguez, withdrew his support over the size of the development and what he perceived to be insufficient affordable housing. The city had struck a deal that would set aside 50 percent of the units at the Upper Manhattan for below market-rate tenants, thanks to city subsidies.

The mayor himself described the rejection as a loss of affordable housing for the community.

But Mark-Viverito defended the Council’s decision to vote against the Sherman Plaza proposal, noting that in the case of the La Central project, Salamanca was able to get to a point where community concerns were addressed—adding that every project and every community’s concerns are different and saying it was unfair to characterize Sherman Plaza as a “rejection of MIH.”

She also stressed that a land use decision “goes through multiple steps” and said that when the mayor was a Council member, “he asked for the same level of consideration in deliberations that had to do with his district.”

“We support that way of doing business, right, that we have the opportunity to leverage our vote to again address the needs of the community,” Mark-Viverito continued.

The La Central proposal which will consist of 831 affordable apartments, 160 supportive housing units, including commercial space, a skate park, a YMCA and a new observatory for Bronx Science High School—his first land use vote in his district.

Although just a few weeks ago he was not sure he would approve the project due to pending concerns—including the use of 32BJ workers for the facilities, guaranteeing a real, livable wage, local hiring, securing green space and deeper affordability—those needs were successfully met, he said.

“I fought for what I believed my community needed and fortunately, we were able to come to an agreement to where all of my concerns were addressed,” Salamanca said.

The speaker said that the Council is interested in voting on projects that will bring benefits to the community, particularly in the area of affordable housing—adding that the Council rarely votes down projects.

“So this is a very rare occurrence and as we’ve seen, we voted on a great project that helped us bring about 1,000 units of affordable housing and they’re gonna be many more to come down the pipeline,” Mark-Viverito added. 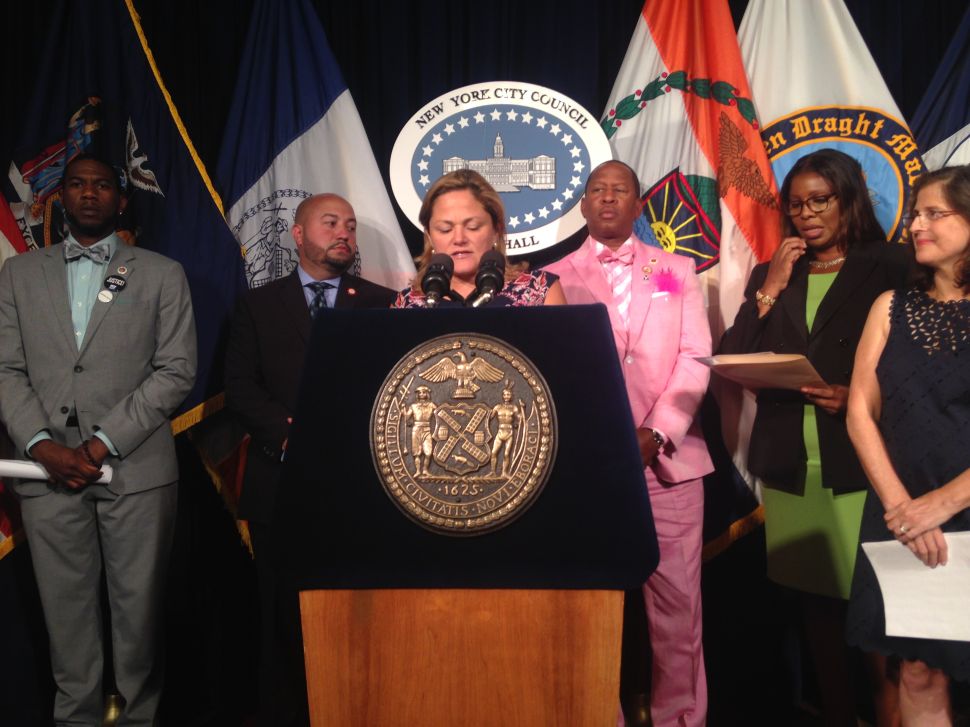