Another illuminating performance by Rachel Weisz and a brilliant screenplay by the distinguished British playwright David Hare make Denial one of the most powerful and riveting courtroom dramas ever made. It’s a rich and meticulously researched true study of the infamous 2000 London trial in which Deborah Lipstadt, an American academic who teaches Jewish history courses at Emory University in Atlanta, was sued for libel in the U.K. by nutty, prejudiced, controversial, widely hated English historian and Nazi sympathizer David Irving (played with quiet, smoldering force by creepy Timothy Spall). Lipstadt had labeled Irving a Holocaust denier in her 1993 book Denying the Holocaust, a charge which he claimed—despite his insistence that there were no gas chambers and the Holocaust was a myth perpetrated by publicity-seeking Jews—had damaged his career. Having already refused many invitations to publicly debate him on his assertation that the genocide of 6 million Jews was a hoax (“I won’t debate facts,” she said), Lipstadt was shocked to find herself forced to fight prejudice in a court of law. Her ensuing two years of legal battles form the meat and muscle of the film, based on her book Denial: Holocaust History on Trial. The brave, humiliating, often terrifying experiences compiled in both the book and the film are devastating.

The trial took place in England, where the burden of proof in a libel case is always placed on the accused and you are assumed guilty until you can prove your own innocence. (I know this to be true, because I was once forced to defend myself at the Old Bailey as a co-defendant with Marlene Dietrich in a case involving insults she hurled at the sponsor of a TV special show in an interview with me published in the Daily Mail. I should write a book of my own.) Anyway, Lipstadt has no choice but to defend herself in a heated trial with the marvelous support of her legal team, which included the renowned Scottish barrister Richard Rampton (Tom Wilkinson) and ace solicitor Anthony Julius (Andrew Scott), famous as Princess Diana’s lawyer in her famed divorce case against Prince Charles. The result pitted a wealthy, prickly and formidable British anti-Semite against a Jewish girl from Queens whose job was to prove the Holocaust actually was one of the defining events in history without ever appearing on the stand herself. Although the outcome is no secret, it will still make you stand up and cheer.

Following David Hare’s extensive trial preparations to the letter, director Mick Jackson stages the layers of the case in all of its actual locations, from Atlanta, Georgia to the actual Royal Courts of Justice to never-before-filmed sections of the Auschwitz-Birkenau extermination camp in Poland, where 1 million prisoners were murdered. Since it remains a memorial to this day, some sections can only be used in documentaries, requiring perfectly scaled interiors to be masterfully constructed back in England. But trust me: The scenes at Auschwitz, where Lipstadt and her legal defense team visit the massive gravesites at the concentration camp and witness the thousands of eyeglasses left behind by people on their way to the crematoriums, are hair-raising and unforgettable. You don’t have to be Jewish to shed a tear of compassion when the Auschwitz historians describe what the Germans did with potassium cyanide.

Everything about this responsible and exemplary film is accurate and emotionally wrenching, from Weisz’s fascinating performance, replete with strident vocal mannerisms and unflattering hairdo, to the real specifics of the court case, even including Spall’s ferocious performance as David Irving, who is now publicly discredited with a criminal record to boot, as the epitome of the banality of evil. At the end of the David vs. Goliath trial, when the verdict is announced and truth and justice trump bigotry and hate, Denial becomes its own sensitive and cogent chapter in the historical fight for human rights. Eschewing clichés and surpassing the limitations of a small budget, it’s one courtroom drama that reaches far beyond the limiting scope of a courtroom. 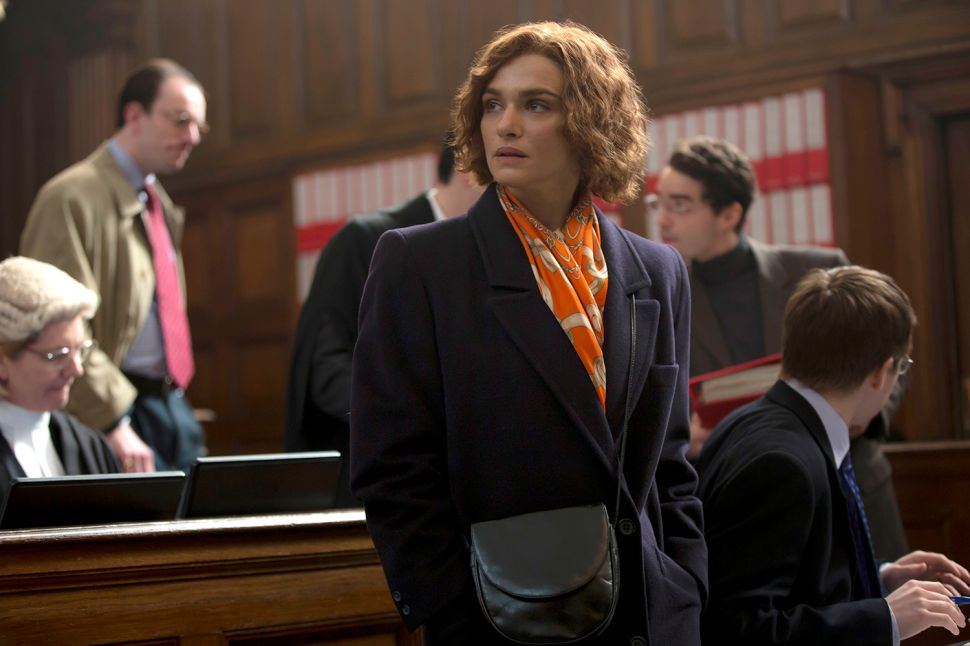