Donald Trump again pledged in a speech in Manhattan today to break with three decades of electoral history by winning New York State in November—and claimed the state has become a wasteland that only his presidency can save.

Accepting the nomination and ballot line of the New York State Conservative Party at its convention at the Marriott Marquis in Times Square, the Queens-born billionaire maintained that he would be the first Republican nominee to carry the Empire State since President Ronald Reagan’s re-election run in 1984. Even with current polls putting Hillary Clinton some 20 points ahead, and even though she pulled more than twice as many votes in New York’s Democratic primary than Trump drew in the GOP one, he insisted he would ultimately win New Yorkers over with his agenda and his accent.

“I’m a real New Yorker, folks. I will say this. You’ll never get more of a New Yorker you want for president than you have here,” he continued.

It was a theme Trump revisited several times in the rambling 20-minute address. He recalled his victory in the Republican contest in April, insisting “we won in every area”—in fact, Ohio Gov. John Kasich carried Manhattan, where Trump lives and has built his eponymous towers—and remembered visiting the deindustrialized cities of Rust Belt upstate.

“It’s so sad when I toured the state during the primaries, and I got to see every part of the state. I was in Syracuse, and I was in Albany and I was in—and I saw those great beautiful buildings that are empty and rotting and falling down from the wind and the rain and the snow,” he said. “And they’re all over the state. And there’s no hope. No hope. Other than if I become president.”

At fault, Trump claimed, were the state’s high taxes and unscrupulous manufacturers that have offshored factories in Mexico and China—manufacturers that he again claimed would have to eat a 35 percent tariff that he would somehow get Congress to pass if elected. He even jabbed at Gov. Andrew Cuomo’s much-maligned Start-Up New York program, which has spent some $53 million on advertising to encourage companies to relocate to the state but reaped only 408 new jobs.

“We are going to bring our businesses back. We are going to make sure they come back into New York and into New York State. I’m tired—believe me, I’ve been out in Suffolk and different places in Long Island,” Trump said. “Unbelievable the devastation that has happened in this state.”

“We are going to play New York. We’re not doing this just for show,” he continued.

The co-chairman of Trump’s campaign in New York is Buffalo developer Carl Paladino, Cuomo’s 2010 opponent for governor. Paladino is himself nearly as polarizing as his candidate, and told the Observer last month that there was “no doubt” President Barack Obama is a Muslim. 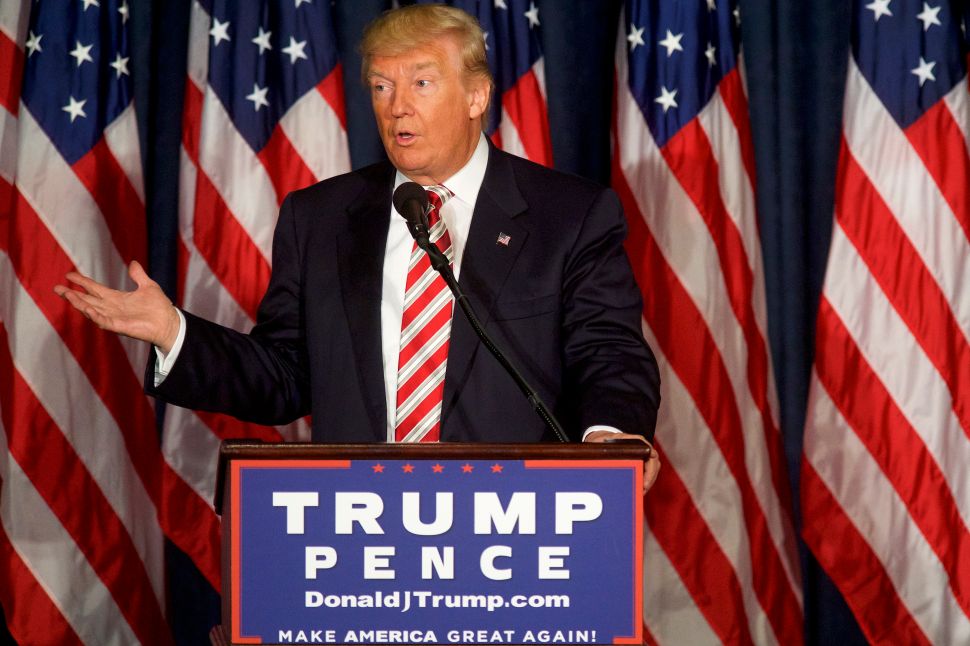