I refer to his “memo to staff” issued Wednesday September 7, four days before the eleventh anniversary of 9/11 and the fourth anniversary of the Benghazi massacre. In the memo, Director Comey assures America that he and his agency are “honest, competent, and independent” and his early decision to recommend no indictment of Hillary Clinton for her various classified information crimes was not difficult.

Hey, Jim. Something  about your memo doesn’t ring true—and it’s not just your prickly tone. I carried a Top Secret clearance for three decades so I got all the briefings and I signed all the papers and I know damn well that Hillary’s grossly negligent handling of classified information—which your investigation documented—is criminal. And somewhere in your Washington-shrunken-soul, you do, too.

Timeline dates matter, and the dates in question begin September 20, 2012—nine days after the Benghazi disaster:

Nine days after the attack, on Sept. 20, 2012, the House Subcommittee on National Security, Homeland Defense, and Foreign Operations, which is part of the larger Committee on Oversight and Government Reform, sent a document request to Clinton, who was still Secretary of State. It was a broad request, intended to cover anything written or recorded in any way that might have something to do with Benghazi. It without question covered emails. The State Department produced some material in response, but never any emails from Clinton.

As The Examiner notes, your agency’s own report discussed several formal requests made by the House Select Committee on Benghazi for relevant documents.

I presume a serious professional detective like yourself has read Part IV of the Benghazi committee’s report, the proposed version issued at the end of June and the updated version in early July. If you haven’t read it, well, it’s high time you got to it.  (Here’s a link to the Part IV pdf on the committee’s website, provided for your convenience.)

Part IV is tedious reading. As a government worker, you ought to be able to handle that. Part IV provides the deep and documented background for the obstruction of justice charge.

For that matter, the entire report is a tedious read. That’s why I doubt the quick study artists in the mainstream media who already know everything didn’t bother to read the proposed report—much less the updated version.

Failure to slog through the brutal details didn’t stop the usual geniuses from immediately dismissing the  proposed report. We heard the lines, like “nothing new here” and “nothing interesting, move along.” Such dismissals slander a remarkably professional investigative effort led by Rep. Trey Gowdy. Gowdy knew the Benghazi massacre mattered and he wanted to produce a thorough report. We had an ambassador killed in an attack by a radical Islamist terror group sharing the same murderous goals as Al Qaeda and the Islamic State. Think about it, Jim. The Benghazi attack occurred on 9/11, an iconic date. That’s no coincidence.

Director, it’s time for you to admit you erred in early July. You’ve got the evidence.

15 years after 9/11 we are still at war with these religious totalitarians because they wage war on us. Your FBI Counter-intel guys are the domestic front line in the Global War on Terror. These agents—your Bureau’s outstanding line agents—know we’re at war. I’ve talked with several of them. So a thorough and responsible investigation of the Benghazi atrocity was justified… you do agree, don’t you, Jim?

I’ve read Part IV of the Committee’s report—the entire tedious all of it—even the footnotes. It has moments of drama, but Part IV is basically a lesson in fortitude. The Committee continued to hang tough despite the obnoxious bureaucratic foot-dragging, the calculated failure to provide requested documents and the ultimately illegal obstruction of justice.

I say the Committee. It’s really the majority, the Republicans, who faced the obstruction of justice.

My assertion of connivance isn’t too outlandish. Democrats did connive with Team Hillary when Ms. Clinton testified before the then Democrat-controlled Senate Benghazi committee in 2013.

Political obstruction segues into criminal obstruction and The BleachBit Timeline. March 2, 2015 is a critical BleachBit date. That’s when The New York Times reported Hillary had a private email system.

Sharyl Atkinson has kept a running Benghazi timeline that is quite thorough and admirable. I recommend her timeline as a reliable reference. (Atkinson has character and grit. She has the courage to take on powerful crooks. Between you and me, Jim, you’d do well to follow her example.)

Zerohedge’s discussion of the March 4 subpoena includes a long quote from the House Select Committee’s report. March 4 is a particularly important date because that’s the date the committee requests the “preservation and retention of all documents and media” related to Hillary’s two rogue email addresses on her rogue email server operating (safely, she thought) beyond the reach of federal record retention regulations.

Then comes what Zerohedge calls a difficult “moment”:

Therefore, sometime within the 6 days after a call with ‘President Clinton’s Staff,’ that PRN server was wiped clean using BleachBit despite the subpoena from the House Select Committee on Benghazi received weeks earlier on March 4, 2016.”

BleachBit, Jim. Software for a thorough scrub of a server. To remove evidence.

Now tell me, Comey. Do you really think (as Zerohedge says, tongue in cheek) “Mills, Hillary, President Clinton’s Office were all blissfully unaware of the actions of their rogue IT guy”? You and your agency know Hillary failed to turn over work-related emails to the Committee. You think these curiouser and curiouser shenanigans were all accidental? Are you and Alice living happily together in Wonderland?

In a letter sent to Platte River Networks on September 6 (the day before your protesteth too much memo), Jason Chaffetz (R-Utah), now head of the House Oversight and Government Reform Committee, gave the FBI credit for confirming that Hillary failed to turn over work related emails despite repeated requests and subpoenas to do so.

I employ italics, Jim, to get your attention, because, dammit, Chafetz is doing your job. He’s going after the little fish to get to the shark. That’s how you Feebs operate when you’re doing your job. How come you didn’t indict this anonymous Platte River Networks employee for knowingly destroying subpoenaed evidence? I’m not the first to ask this question. Jonathan Turley asked it on September 6.

Turley even quotes 2 U.S. Code § 192. He just didn’t put the question to you as personally as I have.

Jim, I see you as a man in a responsibility-heavy government security position who has acted irresponsibly. Obstruction of justice is an indictable crime—that’s the crime Richard Nixon and his aides committed in the Watergate Scandal. You remember Watergate, don’t you? The scandal that made The Washington Post famous? Turns out the Deep Throat source on whom WaPo reporters relied was the FBI’s Number Two Boss. Back in 1974 our country couldn’t stomach a criminal in the White House. So, Comey, why the hell in 2016 should you help get a criminal elected?

Mr. Director, it’s time for you to admit you erred in early July. You’ve got the evidence. Call a press conference. Recommend Hillary Clinton be indicted and, this time, let Attorney General Loretta Lynch make the decision. She’s the prosecutor—not you.

Recommend indictment for three reasons, Mr. Director. First and foremost recommend she face legal consequences because her actions were criminal.  Recommend indictment in order to re-establish the integrity of your agency, whose reputation has been tarnished by your cowardly July decision. You know it. You face internal dissent as well as external criticism, and somewhere in your previously mentioned Washington-shrunken-soul you know the dissent and criticism is righteous, hence your prickly little memo.

Finally, sir, do it for the dead, the Americans who died at Benghazi.

If you lack the character and guts to recommend indictment, then resign, sir. Resign. 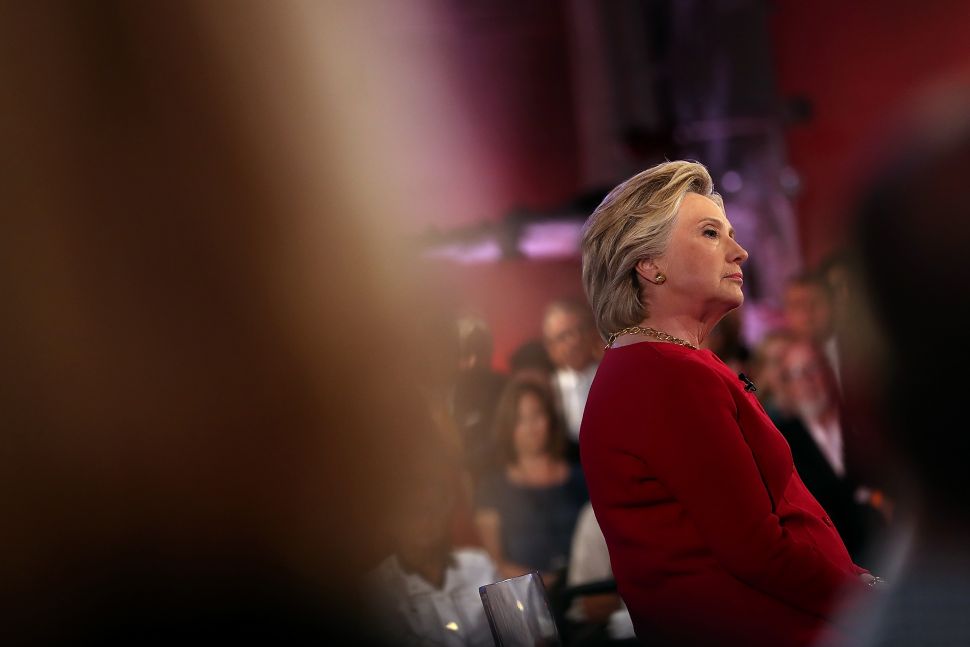