Dover Street Market is lauded for being an anti-department store for the unconventional shopper. Which might explain why it’s located on Midtown’s retail barren corner of 30th Street and Lexington Avenue, but still attracts a heavy stream of customers, perusers and gawkers.

This fashion week, the Rei Kawakubo founded shop is having some New York Fashion Week fun of their own, and they are inviting more than just the upper echelon of fashion insiders. In fact, the shop’s Open House is open to the public, taking place on Friday, September 9, from 6 to 8 p.m.

Of course this won’t be any old open house situation with cheap wine, bad cheese and stale conversation, but rather the beverages will be served by Rose Bakery and you will likely be rubbing elbows with notable names and oversized personalities.

SO SO EXCITED to share this very exciting project I've been working on with @idea.ltd! 1000 copies only!! Available online at www.ideanow.online/store or you can pick up a copy and have it signed this Friday Sept 9th at Dover Street Market NY from 6-8pm 🌟🌟🌟 @doverstreetmarketnewyork

Who can you definitely expect to see there? Bad boy photographer Terry Richardson, who is launching and signing copies of his newest book, Skinny. Created in conjunction with IDEA Books, this particular tome of photos is a particularly personal one, as it chronicles the pregnancy of Richardson’s girlfriend, Alex Bolotow. Richardson’s twins, Rex and Roman, make cameos in the book, as well. Featuring plenty of nudity, breast feeding all captured in Richardson’s lewd style, this book is not for the faint of heart.

It comes stickered up! And with spares too to do with what you will. Huge week this week for IDEA. Double book launch with signing @doverstreetmarketnewyork this Friday at 6pm. This is Suzanne Koller's book Red Lips, Attitudes and Other Obsessions. Every copy comes with its own A.P.C tote bag. Wow! You have to come to the signing. But if you can't then do buy now at www.ideanow.online/store. £45 and yes that includes the tote! Thank you @suzannekoller @apc_paris @j__i__l and all the photographers including #harleyweir (not on Instagram no more…)

On the other hand, another IDEA Books signing will take place by Suzanne Koller, the fashion director of Vogue Paris and the co-founder of Self-Service. The tome, Red Lips, Attitudes and Other Obsessions, takes a deep dive into the fashion editorials this luminary created, featuring photographs by Alasdair McLellan, Patrick Demarchelier, Inez and Vinoodh, David Sims and more. “The book emphasizes my ongoing obsession with women and their attitudes. It is the most important part of my work and makes any fashion image timeless,” Koller explained in a release.

For other sensory experiences, customers can get a first sniff of the newest Comme des Garçons perfume, Blackpepper. The spicy fragrance is at once woodsy and mysterious, making it perfect to pair with basically any piece of clothing that Kawakubo has ever designed.

Skaters and/or lovers of street style will be overjoyed to shop Stüssy’s DSM exclusives: two t-shirts and a cap. While the product officially drops online and in stores on September 10, a small run will be stocked at Dover Street on September 9, starting at 6 p.m. Meanwhile, jewelry aficionados can peruse (and purchase) Elie Top, as the Parisian jeweler debuts Sirius, a six-piece celestial collection, only available here. The jeweler tapped artist Mathias Kiss to whip up an installation to show off the three rings and three pendants in the range.

Other installations worth a visit include the one created by Charles Jeffrey, the evocative English designer behind the brand Loverboy. His hand-painted mural was created in response to his Fall/Winter 2016 range, which featured clothing that was paint splattered, punk-inspired and a little bit hobo chic. So don’t expect to see paintings of flowers from Jeffrey. Balenciaga also has a first floor installation, though designs from artistic director Demna Gvasalia can be found hanging on the third floor. If you’re looking for something new to wear to NYFW, we might suggest starting with that rack. 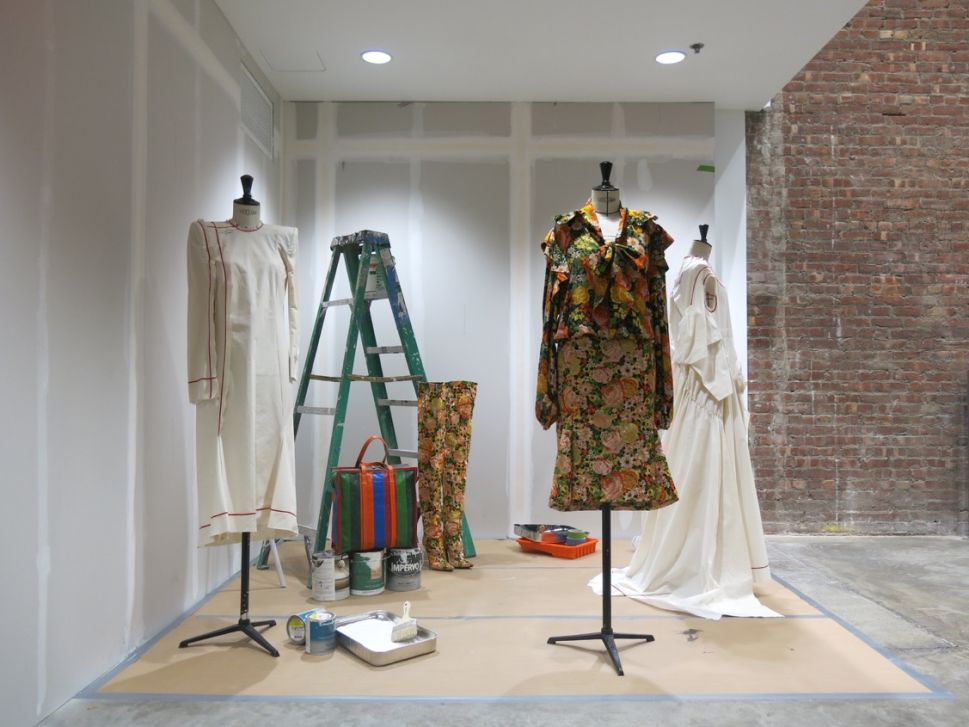