The conventional wisdom is that Broadway shows that open in the fall are at a disadvantage, because Tony voters only remember the productions that bow in the spring. There are exceptions to this rule, however—Hamilton won 11 Tony Awards 11 months after its first Broadway performance. This season, several new musicals aim to steal the $10 founding father’s thunder, while movie stars fight the never-ending battle to get Broadway audiences to see plays. Here are the shows we think you’ll “fall” in love with this autumn.

The Cherry Orchard
October 16, American Airlines Theatre
Stephen Karam isn’t resting on his laurels after the play he wrote, The Humans, won a Tony for Best Play this year—his latest project is a new adaptation of Anton Chekhov’s classic drama. Oscar nominee Diane Lane, who appeared in the last Cherry Orchard revival as a child in 1977, now plays the lead role of Madame Ranevskaya, who reunites with her family at their ancestral estate to stop its foreclosure. Tavi Gevinson (last seen as a possessed Puritan schoolgirl in The Crucible) and Broadway legend Joel Grey co-star.

Les Liaisons Dangereuses
October 30, Booth Theatre
Liev Schreiber knows a thing or two about manipulation having starred on Ray Donovan for four seasons. But while on hiatus from the Showtime drama, he’s practicing a more old fashioned form of revenge in the latest Broadway revival of Christopher Hampton’s play set in 1782 France, which focuses on the Vicomte de Valmont (Schreiber) and his ex-lover the Marquise de Merteuil (Tony winner Janet McTeer). The two nobles are both intent on seducing new conquests and work together to exploit and corrupt anyone who gets in their way.

Natasha, Pierre & the Great Comet of 1812
November 14, Imperial Theatre
Josh Groban proved that show tunes were cool on his album Stages, but can he make a musical adaptation of a section of War and Peace from relatively unknown composer Dave Malloy a hit on the Great White Way? In his Broadway debut, Groban plays Pierre, a rich but socially awkward Russian nobleman who falls in love with Natasha (newcomer Denée Benton) while she waits for her husband to return home from war. Director Rachel Chavkin is completely remodeling the Imperial to recreate the show’s offbeat Off Broadway staging, adding onstage seating and spreading tables, runways and platforms throughout the orchestra and mezzanine.

Alton Brown Live: Eat Your Science
November 22, Ethel Barrymore Theatre
Just in time for Thanksgiving, let the host of Food Network’s Cutthroat Kitchen show you how to talk turkey as his touring culinary show plays Broadway for one week only. Brown’s potentially dangerous (though family friendly) experiments involve comedy, puppets, multimedia displays and even song and dance—this is Broadway, after all! If you’re allergic to audience participation, however, beware: Brown plays games and hosts talk show segments with his guests, and one audience member even acts as his onstage assistant during the performance.

A Bronx Tale: The Musical
December 1, Longacre Theatre
Could Robert De Niro be the next king of Broadway? The legendary actor co-directs (with Jerry Zaks) this tuneful adaptation of the 1993 film he directed and starred in, about a teenage boy torn between loyalty to his father and admiration for a local mob boss he idolizes. There are plenty of other heavy hitters behind the scenes, as well: The book is written by Oscar nominee Chazz Palminteri (adapting his autobiographical screenplay and one-man show), and eight-time Oscar winner Alan Menken composed the score with School of Rock lyricist Glenn Slater.

Dear Evan Hansen
December 4, Music Box Theatre
This coming-of-age musical composed by Benj Pasek and Justin Paul (and based on an incident from Pasek’s own life) was hailed as “the next Fun Home” when it played Off Broadway, and producers are no doubt hoping that it replicates that show’s Broadway success. The title character, a nervous high school student played by Ben Platt of Pitch Perfect, feels invisible until he is inadvertently thrust into the spotlight when one of his classmates kills himself. Evan’s emotional journey has also been retrofitted for the age of social media—characters’ tweets, Facebook posts and Instagram photos will be projected onstage. Michael Greif—who mined similar territory for tears in Next to Normal—directs.

The Present
January 8, 2017, Ethel Barrymore Theatre
The fall season ends as it began: With a Chekhov adaptation, this time a retooling of the Russian master’s untitled first play (often referred to as Platonov). Andrew Upton wrote the new work, set in the 1990s in a country home outside of Moscow; the main attraction, however, is his wife Cate Blanchett. The two-time Oscar winner makes her Broadway debut in the lead role of Anna, a widow celebrating her 40th birthday with a group of friends, including her titular former lover (Richard Roxburgh). As the wine flows, the characters rekindle romantic flames while also letting long-simmering resentments swim to the surface. 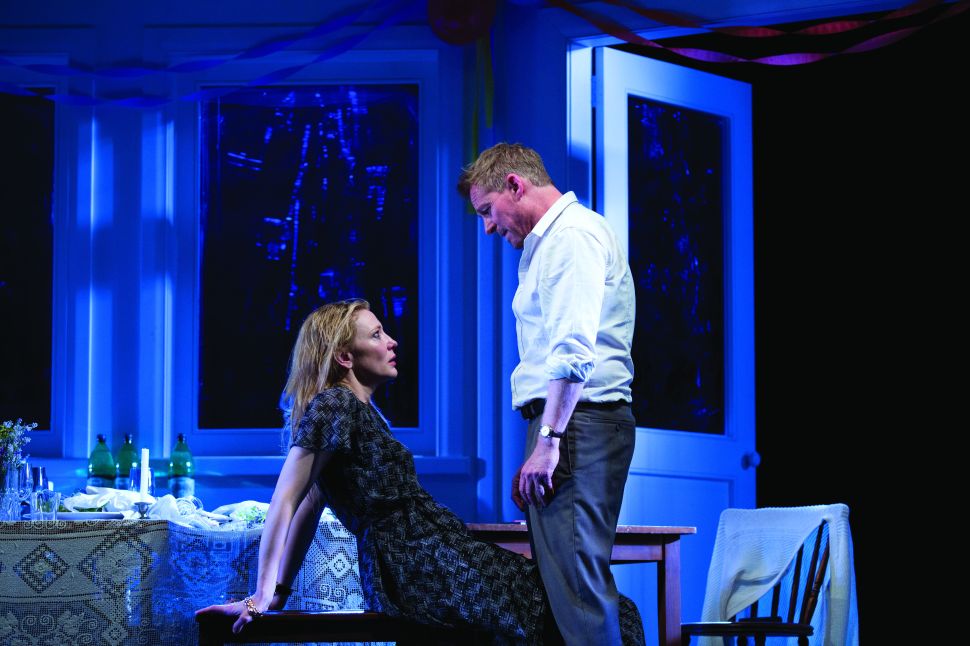