I may not be the genius detective who can identify 243 varieties of ash, but I am a crazy person who spends a lot of time on the internet and who really, really likes Sherlock. We have three code words that were given at ComicCon in July: “Thatcher,” “Smith,” and “Sherrinford.” And now we have the titles of our first two episodes confirmed by BBC One: “The Six Thatchers,” and “The Lying Detective.”

Here’s the best I’ve got.

It seems obvious the title is a reference to “The Adventure of the Six Napoleons,” a story published in the series The Return of Sherlock Holmes, in which Sherlock deals with a series of burglaries in which the only thing that’s ever stolen is a plaster bust of Napoleon. (Turns out, a dude stole a famous black pearl and hid it inside a plaster bust at the factory he worked so he could find it again when he got out of jail.)

Something interesting to note is that John Watson’s blog online has already featured a story called “The Six Thatchers,” but even though the blog has been fully canonically true to the TV series up until this point, I find it hard to believe they’ll recycle a story that’s been online—and spoiled—for years now. (This updated version of the story is about an ex-boyfriend stealing and destroying pottery figures of Margaret Thatcher that his boyfriend made because he stabbed his boyfriend in a fit, accidentally stabbed one of the sculptures before it went into the kiln, and didn’t want the knife mark getting traced back to him.)

The Lying Detective seems a fairly easy leap to “The Dying Detective,” a story in which Sherlock Holmes pretends to be dying of a fatal illness, but won’t let John examine him because he says it’s too contagious. Instead, he asks John to fetch a man named Culverton Smith and then tells John to return to Baker Street and hide before Smith gets there. With Smith thinking he’s alone with Sherlock, he admits that he infected Sherlock with a box he sent in the mail, and it was the same strategy he used to murder his nephew, Victor. Sherlock signals for the police to come, John emerges, (a witness to the confession) and Smith is arrested for admitting he killed his nephew. Sherlock was never sick—he faked it the entire time.

BBC’s Sherlock is never really just about the satisfying mysteries themselves—they’re about the relationship between John and Sherlock. The story “The Dying Detective” reveals a painful truth about Sherlock’s limitations when it comes to friendship: there is no real reason he needed John to think he was dying—he could have easily just told John the ruse and asked him to play along. But, unfortunately, as we’ve seen before (with a certain faked suicidal leap), Sherlock is more than willing to let his friend grieve on his behalf.

And now for the codewords.

The “Thatcher” now seems obvious—a reference to the now-revealed first episode’s title. If Gatiss, Moffat, and co. decide to go literal, we should expect a series of stolen and destroyed statues with some crucial bit of evidence hidden inside them.

“Smith” also seems a bit of a gimme for the second episode, “The Lying Detective.” It’s been confirmed that Toby Jones, as this season’s primary villain, will be playing an updated version of Culverton Smith.

But it’s “Sherrinford” that’s made most fans and me dizzy with anticipation. Because “Sherrinford” means we’re probably going to see a third Holmes brother.

Sherlock Holmes scholar William S. Baring-Gould first proposed the existence of an eldest Holmes in his 1962 fictional biography “Sherlock Holmes of Baker Street.” Sherrinford (whose name is taken from Doyle’s early notes of other names he considered for Sherlock) solved a peculiar problem: Sherlock mentions in the stories that his family is county squires, but with Sherlock off solving mysteries and his older brother Mycroft working for the government, convention dictates that there would be an oldest sibling to run the estate.

And the final episode of Sherlock season three confirms that, in this universe, Mycroft and Sherlock aren’t the other Holmes boys. A colleague in the government asks Mycroft whether his advocacy for Sherlock is “some expression of familial sentiment,” Mycroft cuts him off: “Don’t be absurd. I’m not given to outbursts of brotherly compassion. You know what happened to the other one.”

We don’t yet know what happened to “the other one,” but I’m pretty sure we’re about to find out.

The Internet (okay, Tumblr) had a collective meltdown when theories swirled that Hiddleston, Marvel heartthrob and Taylor Swift ex, might be stepping in as Sherrinford.

When asked at ComicCon, “If you could have Tom Hiddleston onSherlock, would you?” the show’s co-creator (and its Mycroft) Mark Gatiss answered: “Who says we haven’t?”

In the first episode of season 3, when Sherlock returns from “the dead” with Mycroft’s help, he turns to his brother (who gives him back his famous overcoat) and says “Blud,” in a moment of rare brotherly bonding. And then, at ComicCon, Mark Gatiss goes and tweets a picture of himself alongside Hiddles (and Amanda Abbington) captioned: “Blud.”

Sure, “blud” is just slang for friend, but it comes from saying someone is so close to you they’re like your blood brother, and it’s something the Holmes brothers say. Clue, or coincidence?

From the “first look” trailer we’ve gotten so far, it appears this series is going to be more action movie aesthetic than ever before. And with the few brief scenes of a hospital (and the increasing emphasis on Sherlock’s drug abuse that culminated in “The Abominable Bride”) it wouldn’t be a bad guess to wonder if Mycroft and John (and Sherrinford?!?) send Sherlock to a treatment facility.

Make your own deductions. Unless you’re a regular Sherlock Holmes, we’ll have to wait until 2017 for real answers. 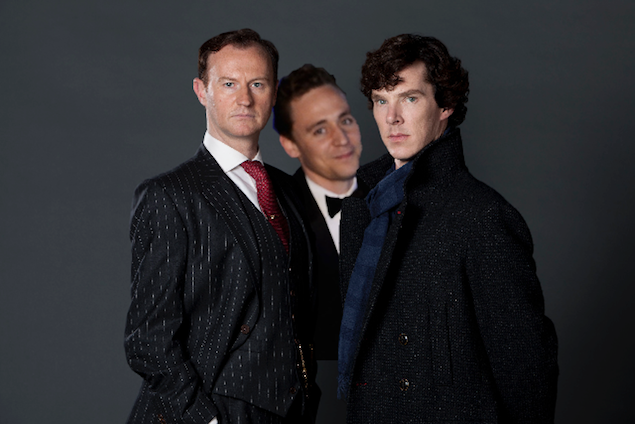