Hillary Clinton’s campaign is stealing from her poorest supporters by purposefully and repeatedly overcharging them after they make what’s supposed to be a one-time small donation through her official campaign website, multiple sources tell the Observer.

The overcharges are occurring so often that the fraud department at one of the nation’s biggest banks receives up to 100 phone calls a day from Clinton’s small donors asking for refunds for unauthorized charges to their bankcards made by Clinton’s campaign. One elderly Clinton donor, who has been a victim of this fraud scheme, has filed a complaint with her state’s attorney general and a representative from the office told her that they had forwarded her case to the Federal Election Commission.

“We get up to a hundred calls a day from Hillary’s low-income supporters complaining about multiple unauthorized charges,” a source, who asked to remain anonymous for fear of job security, from the Wells Fargo fraud department told the Observer. The source claims that the Clinton campaign has been pulling this stunt since Spring of this year. The Hillary for America campaign will overcharge small donors by repeatedly charging small amounts such as $20 to the bankcards of donors who made a one-time donation. However, the Clinton campaign strategically doesn’t overcharge these donors $100 or more because the bank would then be obligated to investigate the fraud.

“We don’t investigate fraudulent charges unless they are over $100,” the fraud specialist explained. “The Clinton campaign knows this, that’s why we don’t see any charges over the $100 amount, they’ll stop the charges just below $100. We’ll see her campaign overcharge donors by $20, $40 or $60 but never more than $100.” The source, who has worked for Wells Fargo for over 10 years, said that the total amount they refund customers on a daily basis who have been overcharged by Clinton’s campaign “varies” but the bank usually issues refunds that total between $700 and $1,200 per day.

The fraud specialist said that Clinton donors who call in will attempt to resolve the issue with the campaign first but they never get anywhere. “They will call the Clinton campaign to get their refund and the issue never gets resolved. So they call us and we just issue the refund. The Clinton campaign knows these charges are small potatoes and that we’ll just refund the money back.”

The source said he’s apolitical but noted that the bank’s fraud department is yet to receive one call from a Donald Trump supporter claiming to have been overcharged by Trump’s campaign. “I’m only talking to you because what Hillary’s doing is so messed up, she’s stealing from her poorest supporters.”

Carol Mahre, an 81-year-old grandmother of seven from Minnesota, is one of the victims of Clinton’s campaign donor fraud scandal. In March, Mahre said she made a one-time $25 donation via Clinton’s official campaign website. However, when she received her U.S. Bank card statement, she noticed multiple $25 charges were made. Mahre, who said in an interview she only contributed $25 because she’s “not rich” and that’s all she could afford, contacted her son, Roger Mahre, to help her dispute the unauthorized charges.

Roger, who is an attorney, told the Observer that he called the Clinton campaign dozens of times in April and early May in an attempt to resolve the issue. “It took me at least 40 to 50 phone calls to the campaign office before I finally got ahold of someone,” Roger said. “After I got a campaign worker on the phone, she said they would stop making the charges.”

Incredibly, the very next day, Carol’s card was charged yet again and the campaign had never reversed the initial fraudulent charges. “I was told they would stop charging my mother’s card but they never stopped.” He added that he knows his mother did not sign up for recurring payments. “She’s very good with the internet so I know she only made a one-time payment.” Roger also pointed out that even if his mother mistakenly signed up for recurring monthly payments then she should’ve been charged for the same amount of money each month, not multiple charges for varying amounts on the same day or in the same month. Furthermore, Roger said that after the campaign was made aware of this situation, the charges should’ve stopped but they never did.

The Clinton campaign overcharged Carol $25 three times and then overcharged her one time for $19, a grand total of $94 in fraudulent charges. The campaign’s overcharges to Carol were just a few dollars short of $100. This is in line with what the Wells Fargo bank source revealed to the Observer.

Since the campaign failed to amend the problem for Carol, Roger contacted her bank, U.S. Bank. However, he ran into problems when he asked U.S. Bank to refund his mother’s money. Roger told the Observer that the bank would not reverse the charges and that a bank spokesperson told him that they had no control over companies that make unauthorized charges. At that point, Roger decided to contact his local news and filed a fraud complaint with Minnesota Attorney General Lori Swanson’s office on behalf of his mother. After local TV news Kare 11 ran a story, someone from U.S. Bank contacted Roger the next day and said that they had reversed and stopped the charges to his mother’s card.

A representative from Minnesota’s Democratic attorney general’s office told Roger that this problem wasn’t in their jurisdiction and that they had forwarded the case to the FEC. However, FEC spokesperson Julia Queen told the Observer they have no record of the case. “We don’t have it,” Queen said. The Observer contacted Swanson’s office and did not hear back.

Roger did eventually get a letter from a lawyer representing the Clinton campaign. In the letter, the lawyer wrote that his mother would be removed from their donor list; however, the campaign did not take any responsibility for the fraudulent charges.

“They basically said that they weren’t accepting responsibility for this but they’d remove my mom from the donor list,” he said. Roger is less than happy with the way the Clinton campaign has handled this nightmare for him and his mother. “This is a load of crap!” Mahre said. “The self-righteousness of politicians drives me insane. If you and I did this, we’d be thrown in jail. This is theft, fraud or wire fraud—it’s a federal crime!”

Since Carol’s story became public, Roger said he’s heard from other people who have been ripped off by the Clinton campaign. “I’ve heard this is happening to other small donors,” Roger said. “People will donate $25, but then when they receive their credit card statement, they are charged $25 multiple times.”

The incident hasn’t just left a bad taste in Roger’s mouth. Carol decided she’s not going to vote for Hillary even though she’s voted for the Democratic presidential nominee every election since President Dwight Eisenhower won reelection in 1956. “My mother is a lifelong Democrat and she’s voted every election in her life for a Democrat but she’s not going to vote for Hillary,” Roger said.

The New York Times reported in 2007 that Clinton’s first presidential campaign had to refund and subtract hundreds of thousands of dollars from its first-quarter total often because donors’ credit cards were charged twice. Additionally, it was reported that Clinton had to refund a stunning $2.8 million in donations, three times more than the $900K President Barack Obama’s campaign refunded.

Another bank source told the Observer that Clinton’s motivation in purposefully overcharging donors is not only to rake in more money for her campaign but also to inflate her small donor numbers reported to the FEC. “This gives a false impression about how much money Clinton has raised,” the source said. “The money that the bank has refunded would not be reflected in the FEC filings till after the election. This gives off the illusion to the public that her support and the amount she’s raised is much greater than what it is in reality.”

A Clinton campaign worker named Kathy Callahan, who worked on Clinton’s presidential campaign in 2008, claimed in a blog post that Clinton fraudulently overcharged her by several thousand dollars. She wrote that she voluntarily left the campaign’s finance committee after she discovered $3,000 in unauthorized charges made by Clinton’s campaign to her Visa card. Callahan said the unauthorized charges caused $400 in overdraft and bank charges and put Callahan over the legal donor limit. Callahan said that after a month of “begging and pleading,” she wasn’t able to get her money back until she threatened to go to authorities. However, when she was finally refunded her money the Clinton campaign refused to compensate her for the $400 in overdraft and bank charges.

Callahan also wrote that Matt McQueeney, who worked in the compliance and accounting department at Clinton’s campaign headquarters at the time, told her, “What happened to you with credit card errors is happening to others.” McQueeney reportedly parted ways with the Clinton campaign shortly after this incident occurred. Backing up what McQueeney claimed, there were several incidents similar to Callahan’s reported in 2008. Callahan and McQueeney could not be reached for comment.

In 2001, the Clintons were accused of attempting to steal items donated to the White House during Bill’s presidency as he exited office. There was $190,000 worth of gifts in question that the Clintons shipped to their then new estate in Chappaqua, New York. Multiple donors said that they had understood that the items they had donated during Clinton’s presidency were to stay in the White House as part of the 1993 White House redecoration project. Initially, the Clintons claimed that the items in question were given to them prior to President Clinton taking office; however, government records proved otherwise. Facing strong criticism, the Clintons decided to return several items including $28,500 in furnishings and they paid $86,000 for other gifts.

Murmurs of theft are nothing new to the Clintons. But Bill begs to differ.

He recently compared himself to Robin Hood and said that through their foundation he asks people with money to give to people who don’t have money. In reality, the Clintons steal from people who have little money and they’re robbing some of Hillary’s most impoverished supporters—including a poor elderly grandma—to fund her campaign. 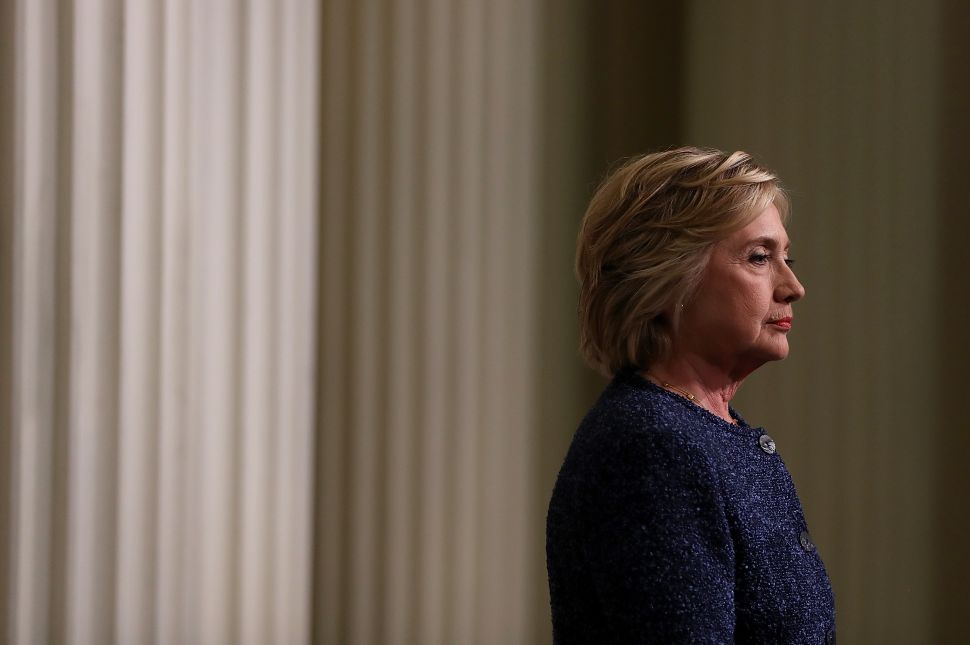