Days before the fifteenth anniversary of the September 11 attacks, Homeland Security Secretary Jeh Johnson and Mayor Bill de Blasio celebrated the return of the federal government to the World Trade Center.

“Sunday is meant to be a somber day. Today is meant to be an uplifting day,” Johnson said, standing before floor-to-ceiling windows on the 63rd floor of One World Trade Center, “a sign of our determination to move forward and to come back stronger than ever before.”

Several federal offices were located in the Twin Towers before the terror attacks, and have since returned to the new One World Trade: Customs and Border Protection is located on the 50th and 51st floors, the Federal Office of Emergency Management on the 52nd and 53rd floors, and the General Services Administration on the 54th and 55th floors. The move was not without controversy—several GSA employees at one point sued to try to prevent the move out of fear or it being targeted by terrorists.

But today’s event focused on resilience, with speakers insisting the return had shown that terrorism had lost.

“In fact, you could even say the terrorist plan backfired, because ultimately we became stronger,” and more unified and prepared, de Blasio said.

The mayor noted that since 9/11, there had been 20 terrorist plots against or based in New York—all thwarted by the NYPD with the help of federal authorities. Meanwhile, Lower Manhattan had bounced back—becoming a “booming neighborhood” both economically and more recently as a residential center.

“The terrorists lost and they lost badly,” he said. “And this place came back literally stronger than ever.”

The event also featured unscheduled plaudits for outgoing Police Commissioner Bill Bratton, who Johnson presented with what he said was the highest award of the Department of Homeland Security for his service to the city. 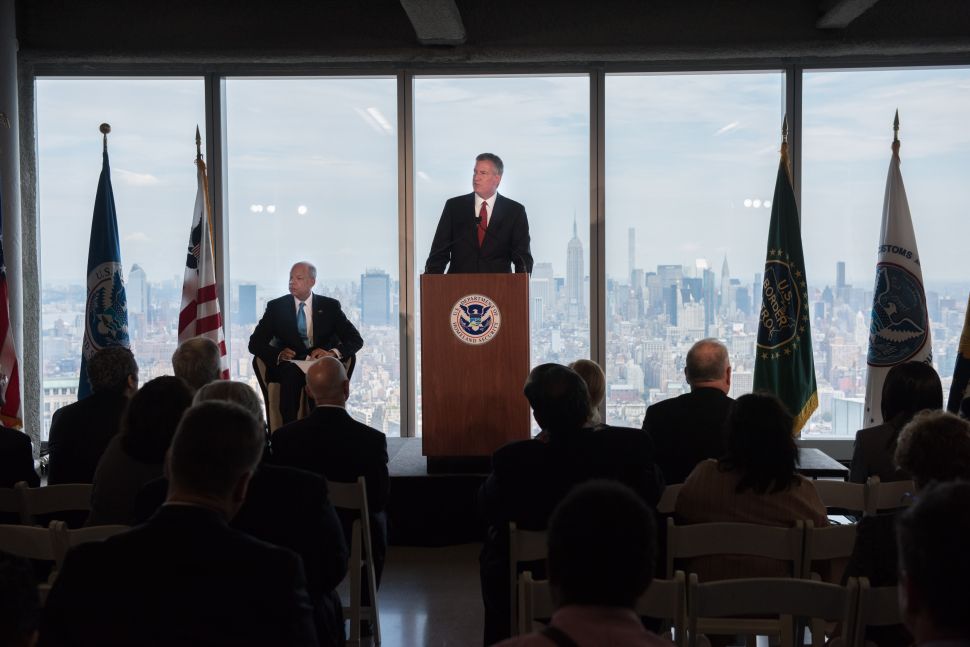