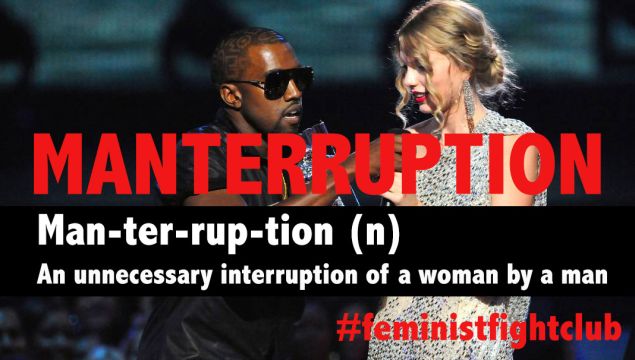 If you thought manspreading was bad, wait until you meet the “The Bropriator.” Or have you ever come across a “Menstruhater” in your workplace? How about “The Undermine-Her”? These are just some of the male colleagues and managers Jessica Bennett and her friends have had to deal with in the workplace over the past 10 years. This was also the impetus for her to start the Feminist Fight Club, a place where they could vent about modern day occurrences of sexism, though they also use their meeting to offer career support and camaraderie. Yes, the men may have not been as blatantly offensive as Don Draper or Roger Sterling, but their behavior was just as hurtful and demeaning. 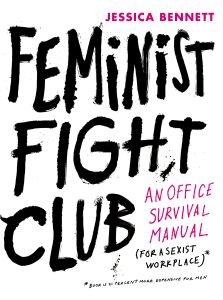 This is why Bennett, who started at Newsweek before going on to Tumblr, Lean In and The New York Times, felt the need to write a book about how to combat sexism in the modern day workplace. Right on par with Lean In and #GIRLBOSS , Feminist Fight Club: An Office Survival Manual for a Sexist Workplace (Harper) is the work bible every young woman starting her career needs.

The book is a glimpse into today’s office atmosphere, which is far from the landscape of sexual equality we are expected to believe. Yes, Bennett worked at an awesome startup with perks like unlimited vacation and a keg in the kitchen, but a casual atmosphere of beer pong during the work day doesn’t exactly lend itself to a feminist-friendly culture. From the start of her guide, Bennett notes that she was raised in the era of Girl Power and entered the workforce thinking sexism was a vintage notion. “The gender war, we thought, was a relic of our mother’s generation, a battle won long ago,” she writes. But soon enough she and her friends, across various industries, were “stumbling into gender land mines at every turn.” She began meeting with her pals every month, back when she was still on staff at Newsweek. “We’d meet every couple of months, and we still do, to share advice, support, and tricks of the trade—as well as the occasional bitch-sesh—from our respective jobs. Things have ebbed and flowed over the years, but the one thing that’s remained constant: each of us faces these issues in our own workplaces on a daily basis,” she told the Observer. 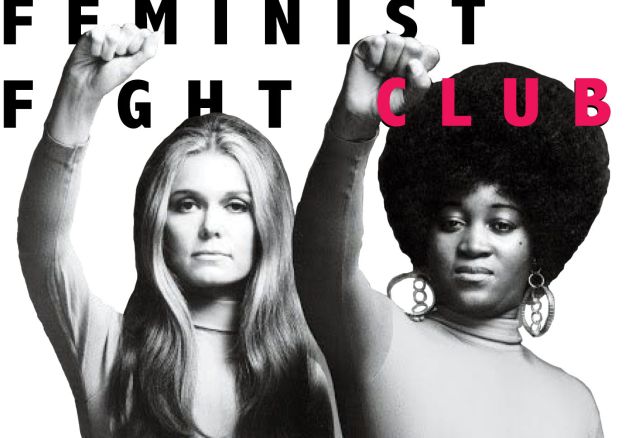 Bennett really wrote this book with the main intention of helping young women. “This is the book I wish I had when I was beginning my career. My goal was to take into account that there are still huge structural changes that need to take place throughout workplaces—and policy changes—but also to give women and men simple, easy to follow, effective tricks for combatting sexist, subtly sexist, overtly sexist, and sometimes just oblivious behaviors that exist in even our most progressive offices. 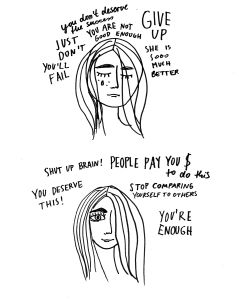 Shut up brain! People pay you $ to do this. Illustration courtesy Jessica Bennett

In fact “subtle sexism” could almost be considered worse, or at least more aggravating, than obvious sexism as she writes it is “The kind of sexism that makes you wonder, Am I actually just crazy? (No, you are not.)” She is by no means saying it is tougher for working women today—you can get a glimpse of the Nora Ephron-era at Newsweek in the upcoming Amazon series Good Girls Revolt just to see how bad it was—just different and often harder to recognize the abuse. “It’s more subtle, more insidious, which I think can make recognizing it tougher. And recognizing these issues is the first step toward combatting them. So while a lot of what my mother’s generation had to endure— literally being barred from jobs for being female; help wanted ads segregated by gender; quid pro quo sexual harassment and having little recourse when it happened—was outrageous, what was clear about it was that it was sexism, plain and simple. It had a name and, usually, a legal definition. Today’s sexism is often so subtle that it can’t even be dealt with through our legal system. You can’t legislate against being perceived as “bossy” when you try to make a point; of being excluded from company social events; and often HR policies aren’t equipped to deal with these issues. Often they’re not even conscious—and women exhibit them too. So I think it’s important to recognize that while huge strides have been made, we still have a long way to go (just look at Hillary!).” 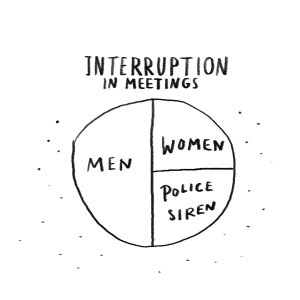 Plus, as great as Lean In and #GIRLBOSS are, it’s always nice to discuss heavy handed topics with a side of humor. Her hilarious names for the different type of men at work—we’ve all dealt with a “hoverer”—Bennet’s little cartoon pie charts, doodles and quizzes are a nice accompaniment to giving you some really strong advice because as she admits, this is really difficult stuff to actually do.

“I think so much of the advice out there deals with the very real but also very huge system issues we face. And dealing with the systemic problems is incredibly important. But also: what the fuck am I supposed to say when I’m going in for a raise? What can I literally do in the moment when I keep getting interrupted, or that fucking brilliant idea I just had gets attributed to somebody else? How can I correct that issue without coming off like a bad sport or a nag? These things may seem petty on some level, and they are micro, but they add up. Also: I wanted to make fighting patriarchy fun. These are serious issues, but sometimes laughter is the best way to not want to throw up your hands and give up.” And just because some of her terms are funny, doesn’t mean they aren’t important.

“Turns out it’s pretty easy to add “man” or “bro” to a lot of these behaviors, and in fact there’s a linguistic name for it: ‘bromanteux.’ These words are silly—Slate called them “cutesy”— and obviously I recognize that. But I think they actually serve a really important purpose: which is to put easy to remember, fun-to-say names to complex concepts, which makes them easy to call out. How long have women been mansplained to? Literally since the dawn of time. But only in the last few years have we had a name for it—and suddenly, we can call it out, men realize when they’re doing it, and little by little we can call attention to and correct the problem.”

So what can young women starting at their first job do immediately so they don’t become the office “Doormat” or “The Contortionist”? Bennet’s tips are three fold:

1. Recognize that we’re all a little bit sexist.

Yes, even women. Try to notice if women are being interrupted in meetings, and see if there’s a way you can jump in to help. Notice if you’re automatically feeling competitive with other women just because they’re women. Try to catch yourself if you begin to think that a female colleague is bossy or braggy—and ask if you’d think she were that way if she were a man.

2. Find yourself a Boast Bitch. She’s like your female hype man.

When you don’t feel comfortable bragging about your accomplishments, or alerting your bosses or colleagues to the awesome thing you did, it’s her job to do this for you. Research shows this works—you don’t get dinged for coming off as conceited or braggy, and she looks awesome and selfless for helping out a sister.

3. Form your own Feminist Fight Club!

Which basically is to say: find a posse. It doesn’t have to be all women, or all people you work with. But you will have an understanding with these people that you have each other’s backs.

And definitely start womanspreading and Bro Leaning. Why should the guys get to have all the fun? 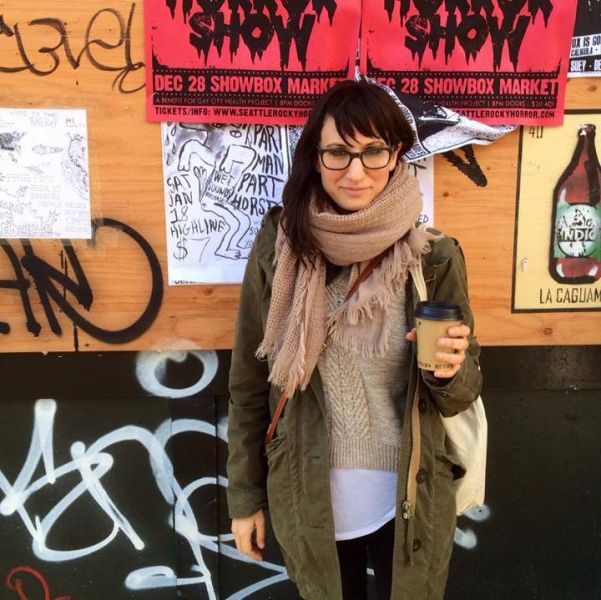 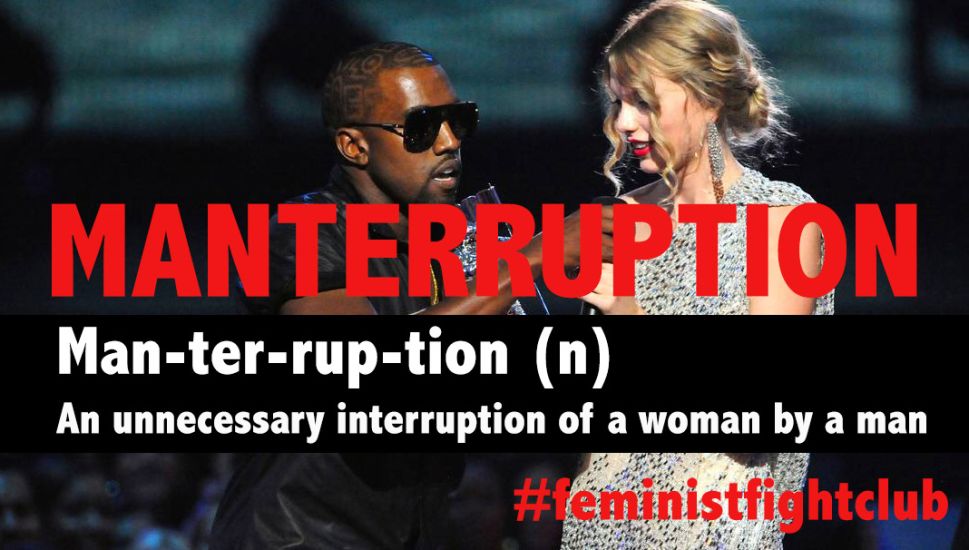