Fuck buzz. That’s how I feel addressing Toronto’s female-driven movies, whether directed by women or not. Because buzz reflects the 80 percent male gender bias, writing about film fails to connect meaningfully with the real audience that is—duh, ask your mothers—50 percent female. For me, the greatest metaphor for the plight of women film artists is Aisling Walsh’s Maudie, an intense wee biopic about the outsider artist Maud Lewis with an Oscar-ripe performance from the great empath Sally Hawkins. (“If it weren’t for Hawkins,” condescends Variety’s Peter Debruge, “there would be little to distinguish Maudie from the sort of 16mm filmstrip made for schoolchildren back in the day.” Wrong!)

Hawkins’ drama resonates because, without endless plot, it’s about a real-life Nova Scotia woman in 1937 with crippling arthritis. Disinherited by her wayward brother and oppressed by her parochial maiden aunt, the titular character takes a job cleaning house for a sullen bastard of an orphaned fish seller (Ethan Hawke). There’s the twist in the apparent misery. That one act of defiance, refusing to be her aunt’s whipping post, slipping out of the familial noose by getting a servant’s job which gives her just a crack of freedom from judgment and ridicule, opens a window on Maud’s creative self. She begins to paint tulips and birds in bright colors; first on the walls of the shack she cleans for the fisherman, then on boards, then for sale. After 35 years of painting, she has a body of work, which reflects a life of relevance, creativity and self-realization.

Maudie is unstoppable. And, so, this movie strikes me as an entry point because women filmmakers and female-driven films need just that bit of freedom from oppression and condescension to do what artists have to do: paint tulips, tell stories that solve our lives’ riddles, inhabit characters that do more than carry and polish the brass of the male protagonists we’ve come to know so well. If you stop to ask for permission the answer will be no. But if you can’t stop the desire to create, follow that obsession…even if that means scrubbing floors.

“It’s a bit like any female artist: it’s difficult,” said Dublin-born director Walsh about why this story attracted her. “I was trained originally as a painter. I was in art school at 16 then I started to make short films, animated film. To be one of five women out of 25 in a class wasn’t that unusual. My father gave me the best advice: just go and do whatever you want to do. I’ve spent a lot of time with artists. You have to be really committed and a bit obsessed. My equivalent to Maudie is that I’d rather go and pack shelves at Sainsbury’s groceries at night than doing something I don’t want to do.”

Maudie inspired audience applause over Labor Day weekend in Telluride and premiered in Toronto—without having yet snagged an American distributor. No neophyte, the 58-year-old Walsh attended the prestigious National Film and Television School in Beaconsfield, England (with award-winning and prolific cinematographer Roger Deakins and Wallace and Gromit co-creator Nick Park). In 2003, she had her Sundance breakout moment with the film Song for a Raggy Boy starring Aidan Quinn about sexual abuse in a Catholic reformatory in 1939 Ireland. Of that seemingly breakthrough moment when her feature received a 10-minute ovation, she says: “I’m standing on stage with Aidan. He whispers, ‘We did it.’ And nothing happened. Six years passed. If that was a guy, six years, really?”

“This competition isn’t going to make me a happy person,” says director Kelly Reichardt on her approach to film festivals. “So let me find a way that I can hold a camera in my hand and get better at it without being at the mercy of everyone.”

The failure of a Sundance bounce is a recurrent axe to grind: male directors that achieve attention for a $1 million film get offered the next Spiderman, but not their female counterparts. Six-time feature director Kelly Reichardt, who has the cerebral Kristen Stewart/Michelle Williams drama Certain Women at TIFF, addressed the post-festival setback for following her breakthrough 1994 first feature River of Grass: “After Sundance, it hit me like a tidal wave. I just wasn’t expecting the pushback and I took it really personally—that is what sexism is. It took me like a decade to recover from it. And so I started looking for my own way in the years afterward and seeing the guys who I had been to Sundance with making their second and third films and me trying to get a second film made I really had my dukes up for sure. I went back to Super 8. This competition isn’t going to make me a happy person, so let me find a way that I can hold a camera in my hand and get better at it without being at the mercy of everyone.” She didn’t release another feature, the acclaimed Old Joy, for a dozen years.

While Reichardt returned to Super 8, Walsh found opportunities and acclaim in England, including directing Sir Kenneth Branagh to his first BAFTA in an episode of the broody mystery series Wallander. “I’m really proud of the things I did in TV. It’s hard enough to get going and then you have to stay there.”

“What we do know is that third film for a woman director is key in terms of your likelihood of going on and having a career as a filmmaker,” says Belle director Amma Asante. She premieres her ambitious third feature, A United Kingdom, a continent-hopping period political romance starring David Oyelowo and Rosamund Pike, at TIFF. Over a Coca-Cola on Duncan Street, she echoes Walsh and Reichardt. “It’s a big hurdle to jump and that’s why I wanted to jump another hurdle right away after Belle. I like to think that A United Kingdom exercises a new muscle.”

This time around, Asante upped the ante, shooting scenes on location in Botswana, where only Anthony Minghella and The No. 1 Ladies’ Detective Agency had gone before. She had days corralling 9,000 extras where previously she had only had 400. She recalls: “The morning after my father died, I shot 400 extras on the set of Belle with the ground moving below me. This time, I was shooting rural in heat well over 100 degrees. In previous movies, I knew I could think in the cold—but you can’t know how you feel in the heat, when the entire set is depending on you to be creative every minute and the air you are breathing is hotter than your body temperature. So, in many ways, this third film may be my coming of age as a filmmaker, taking on new challenges and emerging as a bigger director.”

Also premiering at Toronto, Katherine Dieckmann’s fourth feature, Strange Weather, gives Holly Hunter the kind of meaty lead she deserves. The Best Actress Oscar-winner (The Piano) is getting raves for her grieving mother fractured by her son’s suicide. Earlier this year, Hunter told the Observer: “It’s a fantastic part and at 58, it’s a privilege to get to carry a movie. The opportunities are certainly few and far between. I do not take this for granted. My career started off with such a bang working with Jim Brooks and the Coens, and carrying movies, playing leads. Then, as the years have gone on, I’ve seen the writing on the wall. But I’ve learned that it’s not like television is now. Television is for everybody.”

Toronto’s female-driven features aren’t simply the province of female directors. Pedro Almodóvar returns with Julieta, a quietly devastating adaptation of Alice Munro’s short stories about the tragedy and redemption of a female classics professor. Rossy de Palma, the strikingly familiar ensemble player who made her debut in Almodóvar’s 1987 feature, Law of Desire, likens her supporting role as a maid to that of a Greek chorus. She says, “What I like the most about Pedro’s female characters is that they are the survivors. They’re strong. You can go through a lot of tragedy. You can gather all the pieces of your broken heart and you can arrange things so that you don’t have this scar forever.”

And then there’s Jeff Nichols’ Loving, the fact-based drama about the legal battles faced by the interracial Virginia couple Richard and Mildred Loving (Joel Edgerton and Ruth Negga) who wed in 1958. The petite Oscar-bound Negga, with her elastic features and popping brown eyes, discussed personal bravery versus toughness—“I’m the scarediest cat around”—and that of her character. “I don’t know if Mildred thought she was brave. She was just pursuing her right to justice…Sometimes just getting on and doing is an extraordinary act of bravery.”

That is certainly another theme in talking to women in front of and behind the camera: persistence against the odds. Negga continues, her bare feet tucked under her and her Prada heels hovering nearby, “I think that for anyone who’s had to come up against a situation where they feel like they have to fight a little harder or overcome obstacles, it becomes second nature. There’s this idea that nothing is going to be handed to you, so you develop an amazing work ethic. You’re like the Duracell battery. You have the ability to outlast everybody. All people need, all woman need, is the opportunity.”

Equal opportunity is everything. Like Hawkins’ outsider artist in Maudie, the power to create is as strong in women as it is in men, but the barriers to entry are greater. So, do women who succeed have to be tougher—or braver? Maudie’s director pauses over her fruit plate: “In terms of my work, I’ll fight to the floor with it. That’s the way I got Maudie made,” Walsh says. “But I’m not actually tough. I’m kind of brave. My father used to say to me, ‘Be brave, fortune favors the brave.’ I’m probably braver than I’m tougher.” 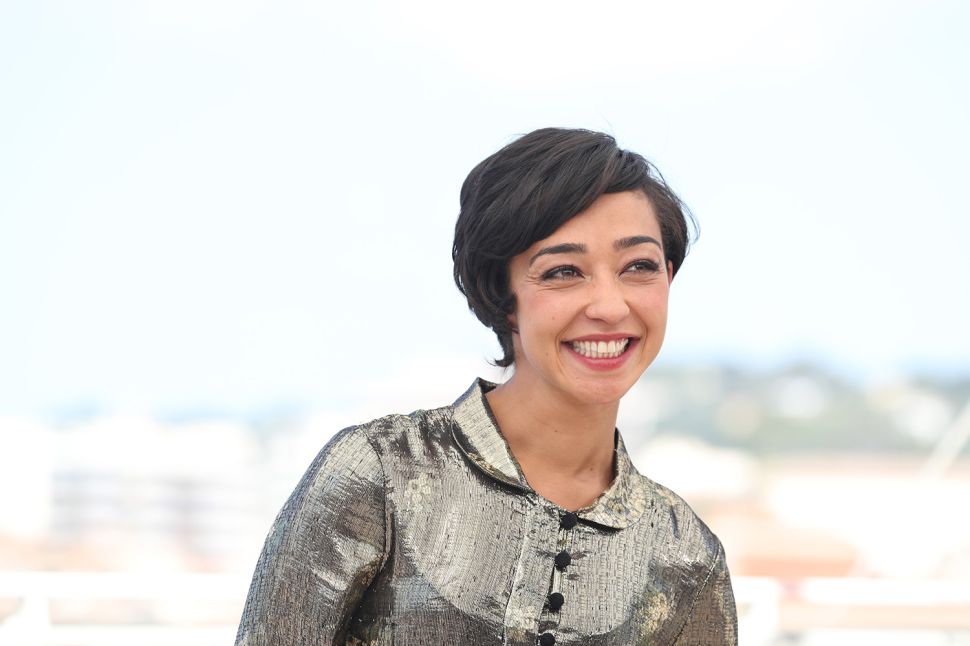