Few things affect our productivity as much as what we surround ourselves with. Yet most of us rarely take the time to step back and really analyze our working environment.

Instead, we take a ‘set it and forget it’ approach to where we work.

We go to the same office, the same coffee shop, the same co-working space and try to force ourselves into a productive flow.

Because we spend so much of our lives working, why not try to make the place we work the best it possibly can be?

Whether you’re at home, in a shared space, or hanging out a coffee shop there are quick and easy fixes to help make your work space work for you.

Why our environment matters (even when we don’t notice)

You may think that you’ve got a good set up, but read into the ways that our surroundings affect us on a subconscious level and you’ll start to feel pretty uneasy about your environment.

Studies have shown how our working habits, both good and bad, are often related to some sort of external trigger or cue, which researchers are increasingly tying to our surroundings. We visit the same places, work at the same desk, and are constantly surrounded by the same influencing factors.

Which is great, right? Find a good working environment and you’ll be forced into a state of flow. But unfortunately, like most things to do with how our brains work, there’s so much more beneath the surface.

As we evolved, our subconscious brain has been trained to keep us safe, even when we don’t realize it. When we’re under threat we need to make decisions quickly, which our brain does through something called ‘thin slicing’. This means it takes one small element of reality and generalizes it, and from that it will determine what behavior to adopt.

So those triggers and cues in your workspace aren’t just affecting you in a way you can consciously comprehend, they’re changing the way your subconscious brain thinks and acts.

Don’t believe me? Here’s some studies that show just how ridiculously powerful our environment is in changing the way we think and act:

So how do we create an environment that’s optimal for making us feel the way we want to during the working day: motivated, productive, and creative?

Kill the clutter before it kills you

There is a long history of creatives and thinkers with cluttered desks. As Albert Einstein once so eloquently put it:

However, whether it’s your closet or office desk, excess things in your surroundings can have a negative impact on your ability to focus and process information.

That’s exactly what neuroscientists at Princeton University found when they looked at people’s task performance in an organized versus disorganized environment. The results of the study showed that physical clutter in your surroundings competes for your attention, resulting in decreased performance and increased stress.

A team of UCLA researchers recently observed 32 Los Angeles families and found that all of the mothers’ stress hormones spiked during the time they spent dealing with their belongings.

Similar to what multitasking does to your brain, physical clutter overloads your senses, making you feel stressed, and impairs your ability to think creatively.

However, it’s not as easy as just getting rid of the excess things in your life. We don’t create clutter simply through laziness or being unorganized, it literally hurts your brain to give them up.

Researchers at Yale recently identified that two areas in your brain associated with pain, the anterior cingulate cortex and insula, light up in response to letting go of items you own and feel a connection towards:

This is the same area of the brain that lights up when you feel physical pain from a paper cut or drinking coffee that’s too hot.

Your brain views the loss of one of your valued possessions the same as something that causes you physical pain.

So what do we do to reduce the stress of clutter?

Find places that inspire you

There’s a reason we feel inspired by large spaces or refreshed from sitting by the window. Apart from a heavy dose of Vitamin D, architecture can have a huge impact on our productivity.

Author James Clear gives the example of researcher Jonas Salk, who, after spending years trying to discover the cure for the polio epidemic ravaging the US in the 50s, travelled to the quiet hills of central Italy where he stayed at a 13th-century Franciscan monastery known as the Basilica of San Francesco d’Assisi.

The space changed the way he thought:

“The spirituality of the architecture there was so inspiring that I was able to do intuitive thinking far beyond any I had done in the past.

Under the influence of that historic place I intuitively designed the research that I felt would result in a vaccine for polio.

I returned to my laboratory in Pittsburgh to validate my concepts and found that they were correct.”

Jonas’ example is just one of many.

It’s been long known that schools with more natural light provide a better learning environment for students and test scores often go up as a result. And natural light and fresh air are known to stimulate productivity in the workplace as well.

You might not be in a position to choose your workspace, but there are quick fixes: look for a spot with natural light from a window or skylight; take a walk outside when you feel stuck; or simply explore a new location.

A new environment can quite literally lead to new ideas. And what’s even more exciting is that studies have shown it’s actually easier to build new habits in new places.

We know that different locations will affect us, so why not use that to our advantage?

Our brains love habits, and if we can associate certain qualities with different places, it can help us get into a better working flow. This is called ‘task association’, where your brain knows that when you’re in a certain place, you’re taking a certain action.

Writer Gregory Ciotti gives one great example of how he forces himself into a better working flow just by changing the device he’s using. In his example, he’s trained his brain to know that when he’s at his desktop it’s time for deep writing like articles. The laptop is for more shallow work like emails or informal posts. And lastly, the tablet is for reading only.

This technique is so powerful it’s even been used to help treat people with insomnia by telling them to only go into their bedroom if they’re actually tired. If sleep isn’t achieved in a reasonable amount of time, they were instructed to leave and move onto another task until they were tired again.

If you can set up multiple workspaces for different tasks you’ll also be able to force your mind into a certain flow, just by physically being somewhere.

A great example of this is writer and artist Austin Kleon who keeps two desks setup in his space: an ‘analog’ desk filled with paper, pens, and markers; and a ‘digital’ desk with laptop and tablet. Idea creation and ‘playing’ takes place on only the analog desk, while shaping, editing, and publishing is in the digital domain.

Set yourself up for success

We may think we have the willpower and control to push through harder tasks, but deep down we’re all lazy. But it’s not entirely our fault. Our brains have been taught to conserve energy at all costs and make subconscious decisions for us based entirely on how hard or easy it is.

Sometimes it’s as easy as turning your phone off and putting it in a drawer so every time you’re tempted to check it you have to go through a lengthy process, while other times it might mean unplugging your TV and putting it in the closet.

One technique I’ve used lately is to close all of my tabs in my browser at the end of the day (a hellish chore for any writer), leaving only my most important task open. The next day, the easiest choice is just to keep working on whatever was left from the day before.

I’m certainly not the first person to use this technique. Even Hemingway used to stop writing mid-sentence so that he always knew where to pick up the next day.

Beyond the physical layout and mental associations of your space, there are some auxiliary things you can also control. The sounds around you and the music you listen to can have a huge impact on your productivity.

We’ve written about the power of music and how to find the right track for the right task before, but it’s important to note that certain sounds can be incredibly harmful to how you work.

Studies show that of all things, intermittent speech—hearing small snippets of conversation—can have an incredibly negative impact on your ability to concentrate.

One meta-analysis examined 242 studies of the ways noise affects performance, and found that when it came to performing cognitive tasks—like staying attentive, reading and processing text, and working with numbers—performance was more affected by intermittent speech than by either continuous speech (which would have little variation in volume and rhythm) or non-speech noise.

Bad news for those of us in shared spaces or offices.

There are options though. If you can’t find a spot that’s silent, noise cancelling headphones or music that drowns out speech can help regain that focus.

When it comes to nature versus nurture in how we work, nurture almost always come out on top. The habits we’ve formed and the triggers we surround ourselves with can have a huge impact on the quality of work we do and how much we get done in a day.

But with a bit of mindfulness and tweaking we can create the kind of space that helps us get into flow quickly and more often. 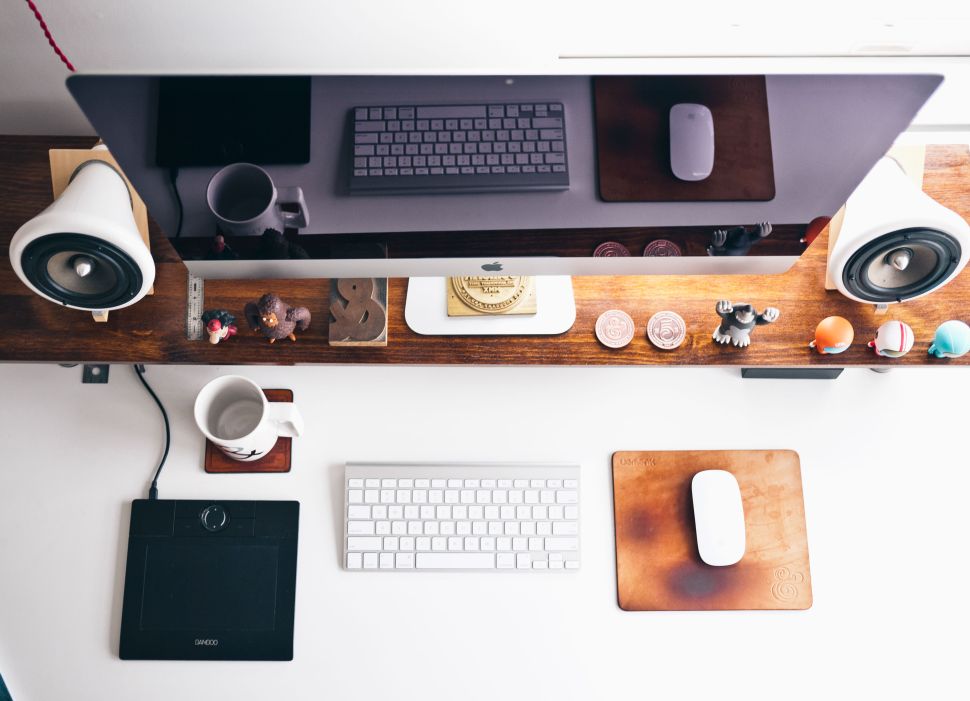