On August 31, Obama used his home state of Hawaii as the backdrop for a speech on climate change. “No nation, not even one as powerful as the United States, is immune from a changing climate,” the president told the Honolulu audience. He also spoke in Nevada on climate change the same day. There, Obama criticized the inaction and skepticism many Republicans hold toward the threat of climate change.

Despite Obama’s rhetoric, his administration has supported several measures with disastrous implications for climate change, including the Trans-Pacific Partnership (TPP) trade agreement, and significant increases to domestic oil and gas production. Rather than make meaningful efforts to protect the environment, Obama has used the polarity between Republicans and Democrats on climate change as a platform to greenwash his polluted legacy.

Nearly every major environmental organization in the United States vehemently opposes passing TPP. The Sierra Club, National Resources Defense Council, Friends of the Earth and several others are actively lobbying against passing the agreement.

“In its more than 6,000 pages of binding rules, the deal fails to even mention the words ‘climate change,’” writes the Sierra Club in a document outlining the environmental impacts the deal would incite. They specifically cite concerns over the lack of transparency involved in TPP negotiations, and how it negates the ability to enforce environmental regulations while providing corporations with unprecedented rights. TPP provisions allow corporations to seek compensation for profit losses attributed to environmental regulations.

The deal would also open up new markets to crude oil and gas from the United States, providing further incentives for coal mining, oil drilling and fracking. Obama has already broken promises of weaning the United States off its oil dependency, by overseeing massive expansions in fossil fuel production, opening up 59 million acres in the Gulf of Mexico to oil and gas drilling, and increasing the sale of leases for drilling on federal lands.

Although TPP has provoked staunch opposition within the Democratic Party—with both Sen. Bernie Sanders and former Secretary of State Hillary Clinton opposed—Obama recently affirmed his confidence in the agreement. “I think after the primary season is over, the politics settle down a little bit in Congress, and we’ll be in a position to start moving forward,” he said at an April press conference in Germany. What with his endorsement of Clinton for president, Obama is likely depending upon her to win election in November, and finalize TPP once she enters office.

The Sanders campaign and several prominent labor unions came out against TPP after fast-tracking authority was granted by Congress in 2015. This eventually forced Clinton to cave to the pressures of the popular consensus among Democrats. Basically, she was pushed into rejecting the deal to avoid losing highly-coveted labor union endorsements.

The Obama Administration has gone to great lengths to shield Clinton from criticism regarding TPP, stepping in to delay the release of anything from her private server regarding the agreement until after the general election in late November. This, in turn, has provoked speculation that these particular emails would reveal Clinton’s support for TPP.

According to Japan News, a senior Japanese government official predicts Clinton will change her stance and support TPP again if elected president. Clinton’s 2008 Campaign Chair, Virginia Gov. Terry McAuliffe, told Politico in an interview that he also believes Clinton will flip and ultimately support the trade agreement. These sentiments were reiterated by Chamber of Commerce President Tom Donahue in a January interview with Bloomberg TV.

The Clinton campaign has also been working hard on rebranding Clinton’s image on the issue. The paperback version of Clinton’s book, Hard Choices, omitted her support for TPP, which she had previously referred to as “the gold standard in trade agreements.”

Clinton initially supported the controversial Keystone XL pipeline along with Obama, but flip-flopped to opposing it for political expediency several months into her presidential campaign. As secretary of state, Clinton stated she would be “inclined to approve” the pipeline, and her State Department approved a similar pipeline in the same region. Keystone XL was eventually dropped by the Obama Administration over mounting criticism.

Clinton has also vocally opposed Arctic drilling after pressure from environmental groups inspired her to do so. Yet as secretary of state, Clinton said the United States will “claim what is ours,” with regards to Arctic oil. As senator in 2006, Clinton voted twice in favor of expanding drilling in the Gulf of Mexico, and in 2001 voted against restricting drilling off the coast of Florida.

Obama’s inaction and Clinton’s silence on the Dakota Access Pipeline are also disturbing. Native American tribes have joined environmental activists in a fight against the pipeline, which threatens their sacred sites, drinking , and livelihood. According to The Hill, “citing the lawsuit, the White House directed questions on the pipeline to the Department of Justice, which declined to comment.”

Sanders, on the other hand, issued a statement demonstrating he’s willing to lead the fight against big oil in a way that Clinton and Obama are not.

After all, Clinton and Obama have received some of the largest donations from the oil and gas industry among Democrats throughout their careers. This includes millions of dollars Clinton received from oil and gas lobbyists—via the Clinton Foundation—during her time as secretary of state.

Obama’s frequent use of the National Parks to boost his image, with highly-publicized appearances during his second term, is hypocritical given how little his administration has done to help the National Parks overcome the challenges they have been facing since he first entered office. The parks maintenance backlog was $9.2 million in 2009. This year that deficit has increased to $12 billion.

While Obama has managed to procure small increases to the National Park Service annual budget from Congress, and designate several new national parks to the park system, the issues facing the National Park Service warrant more than incremental improvements. The budget shortfalls and growing maintenance backlog is being used as an excuse by the leadership of the park service to open up philanthropic sponsorship opportunities from corporations in the National Parks; an unprecedented move contrary to the values the parks were founded upon, and a move being done without any public input.

Last week, Obama increased the size of the Papahanaumokuakea Marine National Monument in Hawaii, which was first designated by George W. Bush in 2006. Headlines touted the move—declaring “Obama creates the largest protected place on the planet”—but failed to mention that a Republican did it first. News outlets covering the expansion also failed to note the need to protect land areas, in addition to marine areas, based on ecological need rather than mere convenience of space.

The National Parks should be more than just a photo opportunity for Obama. The environmental threats facing the parks—and unprotected ecosystems throughout the United States and the world—demand greater, more meaningful action than what has come from the Obama Administration; or what is likely to come from a second Clinton Administration. 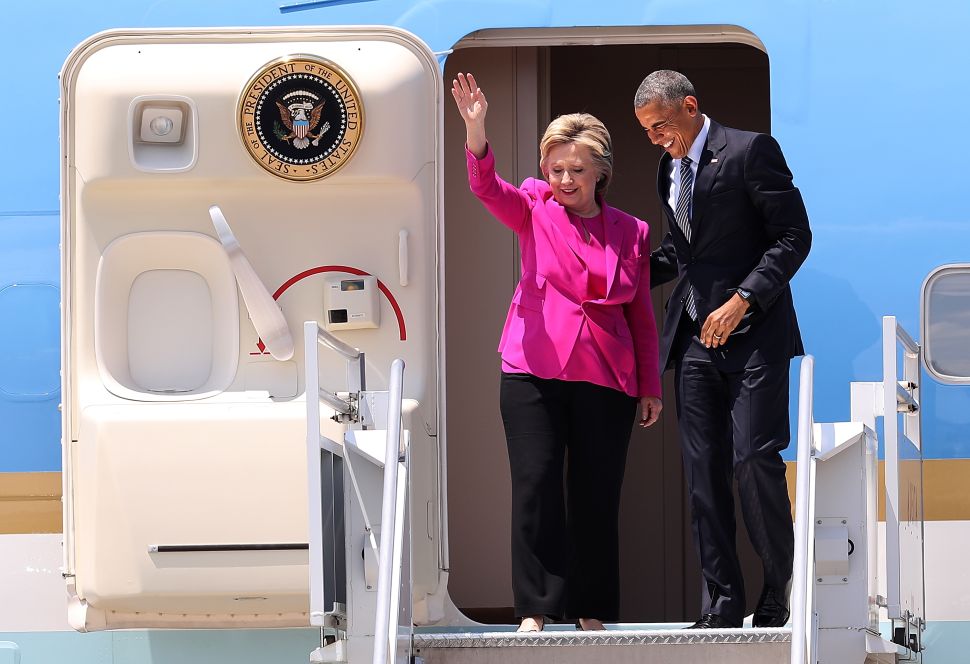