Two of the leading potential candidates in New Jersey’s approaching gubernatorial race are taking wildly divergent approaches to securing their party’s nomination. Senate President Steve Sweeney (D-3) and Jersey City Mayor Steve Fulop are the two most talked-about Democrats in a race that will decide Republican Governor Chris Christie’s successor, and they have both seemingly staked out a strategy with respect to one of the state’s most influential unions: the NJEA.

The largest of the state’s teachers’ unions, the NJEA could have the power to make or break a gubernatorial bid during the primary next June as one of the most well-heeled sources of campaign cash for both Democratic candidates and their attending super PACs.

Fulop has embraced the group, shifting away from the reform-minded Parents for Progress (P4P) school board ticket toward one aligned with the JCEA, the local arm of the statewide union. After supporting P4P tickets during the run-up to his mayoral bid between 2010 to 2013, Fulop sat out the 2014 race before endorsing JCEA-led tickets in 2015 and in this year’s election.

Sweeney, meanwhile, had a well-publicized break with NJEA leadership when he called for state and federal investigations of the group. Its leaders had threatened to withhold campaign contributions from Democratic candidates until Sweeney posted a bill to constitutionally mandate quarterly public pension payments. If he does choose to run, Sweeney will be vying for the nomination with the group’s sworn opposition.

Sweeney called that bill impossible in light of the ongoing standstill in Trenton over transportation funding and declined to post it in time to make it onto the 2016 ballot, where voters would have weighed in to approve the amendment. Fulop and former Ambassador to Germany Phil Murphy, the third front-runner and first official candidate on the Democrats’ deep 2017 bench, support the bill.

The NJEA spent roughly $19.5 million in campaign contributions, PAC spending and super PAC spending during the 2013 race that saw Christie reelected. With ELEC predicting a continuing uptick in PAC spending next year, their influence is likely to grow—especially in a year that many have already called for the Democrats.

But Sweeney appears to be betting on getting the roughly 25 percent of the primary vote he needs to secure the nomination without the union’s blessing, at which point they would be unlikely to back a Republican. Montclair State University political scientist Brigid Harrison said that the primary will bear out whether Sweeney or the NJEA is more powerful standing alone.

“It would seem that they are seeking to flex their political muscle and demonstrate that they’re a force to be dealt with,” she said of the group. “Fulop has to believe that the teacher’s association can be an important ally if he decides to run for governor.

“When politicians are looking to move up a political ladder, they’re certainly going to look for important allies,” she continued. “Steve Sweeney being a notable exception.”

Seton Hall University’s Matthew Hale agreed, saying that the group’s endorsement could help Fulop both with cash on hand and day-to-day campaigning. Sweeney and Fulop, both known quantities for party bosses across the state, have so far ceded the day-to-day advantage to the Murphy campaign, which began in earnest this Spring.

“I certainly think that Steve Sweneey and his standing up to the teacher’s union has made that endorsement much more in play for the rest of the field,” Hale said. “He would certainly love to have it, because they have a lot of money.

“They don’t just help by voting, they help by knocking on doors. And teachers do that quite a bit. It’s less clear if union voters are as lock-step for Democrats as they have been in the past. But it is pretty clear that unions are pretty good at helping their chosen candidate with the ground game,” he said. “Steve Fulop needs that.” 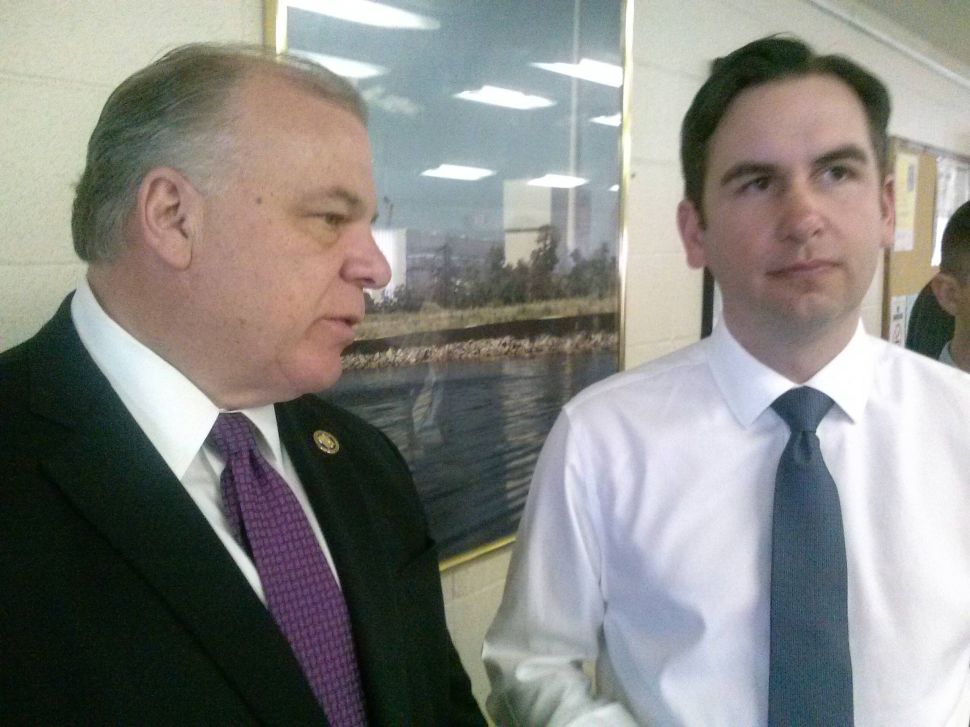