At the opening night of his tour in New Jersey, David Crosby warns the audience that he’s going to be running his mouth.

Accompanied only by his son James Raymond on piano and a rotating cast of acoustic guitars, Crosby tore through a set of classics from his solo catalog, his time with The Byrds and his years playing with Steven Stills, Graham Nash and Neil Young. But it’s his stories, honest and refreshingly self-aware, that put those timeless songs in perspective.

Ever the outspoken grassroots rabble-rouser, Crosby has learned that being frank and forthright about past transgressions brings clarity and creative productivity.

In 2014 he released his first solo album of studio material in 20 years, Croz, and this October he’ll release Lighthouse, a set of nine songs that recapture the airy but blunt, acoustic prophecies of his most treasured work. Crosby recorded the album with Michael League, bassist and producer in the Grammy-winning jam band Snarky Puppy, and will release it on the band’s label, GroundUP Music. Lighthouse was recorded in just 16 days, Crosby’s shortest session ever, and he’s got another album with  James Raymond planned for next year. But there’s no secret to his recent prolific streak—Crosby just attributes this creative resurgence to being truly buoyant for the first time in a long while.

“If it only made you happy to run around in circles and bay like a wolfhound, I would think it was a little strange,” Crosby tells me. “But if you can do it so it makes sense and it makes you happy? You should. You absolutely should.”

At this point in Crosby’s career, being an uninhibited storyteller makes sense, but it hasn’t been without consequence. His relationship with Graham Nash is currently on the rocks after Crosby objected to how he was portrayed in Nash’s autobiography, while Crosby’s relationship with Neil Young is on ice after Crosby spoke publicly about Young dating Darryl Hannah while Young was still in the process of filing for divorce.

Crosby deeply regretted running his mouth about his former bandmate’s relationships, going so far as to apologize last year and admit he was way out of line. “There are people I can criticize: politicians, pond scum. Not other artists that have gone through a hard life, same as me,” he told Rolling Stone.

“If it takes going to the joint to quit, well, I don’t regret it. Y’know, being a junkie is a prison you carry around with you.”

But such candid comments seem to come from a good place. Crosby had always been honest and upfront about what was going on in the world, and the time soon came when he learned to turn his scrutiny inward.

“You know those 12-step meetings that we don’t talk about? I used to go to those for a long time, man, and they really stress that thing of try’na be as straight with people as you possibly can,” he says. “It’s the simplest, honest, best way to deal with it.”

This cowboy ethos has led to some hard-won truths: Crosby credits the five months spent in Texas prison in ’86 for drug possession as the point in his life when he finally got off crack and heroin. “There’s only four answers if you get really, really strung out—you die, or you go into a mental institution, or you go to prison, or you quit,” he says. “If it takes going to the joint to quit, well, I don’t regret it. Y’know, being a junkie is a prison you carry around with you.”

Such past lapses have only rendered Crosby’s pacifism more legitimately felt. After explaining that the Vietnam War was an awakening because it showed kids that the powers that be had no problem sending them off to die for profit, Crosby began an arrestingly piercing rendition of “What Are Their Names” off his first solo release, ‘71’s If I Could Only Remember My Name. The song remains startlingly relevant to this day, when accountability and transparency are still dirty words in politics, and Crosby’s checkered past gives him more cred than ever to suggest that some of these people might also do well after a stint in the joint.

“You already know some of ‘em. You know people like the Koch brothers, but they’re only the most egregious ones,” he says. “There are people whose names we do not know, who are on interlocking directorates of international corporations all over the world, and they’re runnin’ it. They own our congress—that’s how it works.”

Fully aware of how paranoid such tangents can sound, Crosby says he understands the difference between conspiracy and conspiracy theory. But he also believes the archetypal fried-boomer stereotype has largely been played up since Vietnam as a way to dismiss the words of socially conscious movements as sensationalized and unfounded.

“We get that way especially when we start talking about war because war gets glorified,” he says. “People get an image of war that’s all banners and flags and guys marching down the street looking good in front of the girls, and it’s bullshit—it’s really pretty horrible. When these guys are doing wars to make profit, there’s no principle.”

Principle remains a prominent theme on Lighthouse, as on “Look in Their Eyes,” which finds Crosby addressing the Syrian refugee crisis head on and questions why we value some human lives over others.

Lighthouse track “What Makes It So,” meanwhile, continues a line of existential questioning that Crosby has always valued, from the “questions of a thousand dreams” in CSNY’s “Déjà vu” to his struggles with explaining the questions that have no easy answers for his son in “Dream for Him.”

Positioned right after “What Are Their Names,” “What Makes It So” fit seamlessly into the set, solidifying his new work as an extension of the same spirits he channeled in the ’60s and ’70s. “A man stands before you, telling us all what his great leader said,” he sings. “And I say, ‘Where is it written, how many ways can it be read, and what makes it so?’ ”

If there’s certain naïveté associated with such rhetorical questions, Crosby has no regrets for continuing to believe in the power that comes with even being able to ask them.

Neil Young may have alluded to Crosby’s CSNY days with his ’86 tune “Hippie Dream” when he sang, “And the wooden ships are a hippie dream / capsized in excess, if you know what I mean.”

Crosby addressed that sentiment immediately after walking on stage, saying that he’s constantly asked why he continues to believe in such the “hippie dream” of love winning over war, even if it never comes true. His answer: “Because it makes me happy.”

“And if being happy isn’t quite enough, somehow I needed to make it rough,” he sings on Lighthouse’s closing track, “By The Light of Common Day.”

“The country and the world are in pretty sad shape, but you can’t focus on that and have that be all you think about. I think about the stuff that I can do to make it better. And sticking up for what you believe in is one of ‘em.”

And so, 45 years after Crosby first sang “Music Is Love,” he’s finally come full circle and learned to exorcise the anger informing his well-intentioned passions. The hippie dream never really died, Crosby says, because it was never fully realized, but he’s proud that he and his fellow artists still planted the seeds.

“People didn’t necessarily get to rejecting the norm very deeply; they went as far as their look and their behavior,” he says. “But where the rubber meets the road and we actually made some changes was in people’s heads. I think we actually did tilt a lot of people in a better direction.”

That better direction, Crosby reasons, is crucial to navigating through darkness, best expressed through simple metaphor by Lighthouse and its throwback tune “The City” with its direct refrain—“leave the light on, all night long.”

“The country and the world are in pretty sad shape, but you can’t focus on that and have that be all you think about,” he says. “I think about the stuff that I can do to make it better. And sticking up for what you believe in is one of ‘em. Making good art is a better one. Music actually is a lifting force. Just the way war drags people down, music lifts ‘em up.” 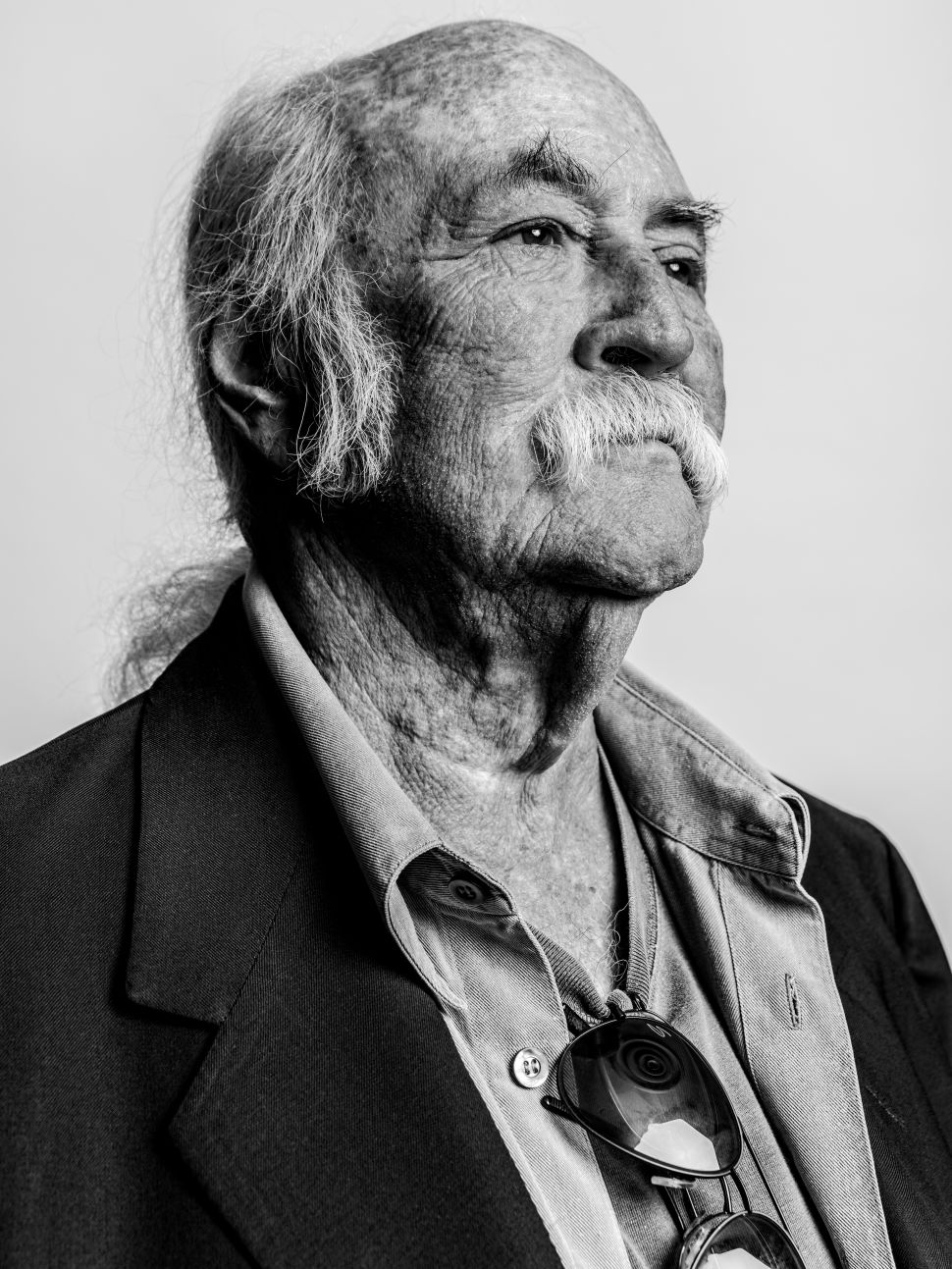