On August 24, the 25th anniversary of Ukraine’s independence, only one head of state visited Kiev in a show of solidarity with the struggling nation: Polish President Andrzej Duda. There would have been none if not for the sudden, although expected, developments in the Polish Parliament—the results of which demanded the president’s urgent presence at the event.

Although Poland, together with three Baltic states, has shown itself a strong supporter of Ukraine’s pro-European push, relations between the two have recently chilled to a dangerous level of mutual mistrust and animosity.

On July 22, Polish Parliament passed a resolution “In memory of the victims of genocide—citizens of the Second Rzeczpospolita—committed by Ukrainian Nationalists from 1943-1945,” establishing July 11 as National Remembrance Day for victims of “genocide” at the hands of UPA-UNSO on the eastern borders of Poland during WWII.

UPA-UNSO is an abbreviation for the “Ukrainian Insurgent Army,” whose leaders, Stepan Bandera and Roman Shukhevych, are considered the spiritual founders of modern-day Ukraine—despite their collaboration with military and political authorities of Nazi Germany.

In the resolution, Polish parliamentarians stated:

“On July 11, 2016 we commemorate the 73rd anniversary of the peak wave of crime, which was committed in the eastern regions of the Second Polish Republic by the civil structure of the Organization of Ukrainian Nationalists, by the armed Ukrainian Insurgent Army, by the SS Galicia Division, as well as by other Ukrainian units that collaborated with the Germans. During the genocide that took place in 1943-45, more than 100,000 Polish citizens were slaughtered, mostly peasants. Their exact number is still unknown and many of them await decent burial and recognition… A tribute to the victims has never been given, and these mass murders have never been called—in accordance with the truth—a genocide.”

All 432 of the Polish parliamentarians voted for the resolution, with no opposition.

In the middle of the night on July 11, 1943, the Ukrainian Insurgent Army unexpectedly attacked some 150 Polish villages, brutally massacring everyone—regardless of age or gender, including newborn babies—who were not ethnically Ukrainian—Poles, Jews, Armenians, Czechs and others.

The reaction from Ukrainian officials was swift and furious.

“I regret the decision by the Polish Parliament,” said Ukrainian President Petro Poroshenko who, during the last NATO summit in Warsaw just days before the event, visited a monument erected in honor of the victims of the Volyn massacre in the Polish capital, knelt, and paid tribute. “But Polish and Ukrainian people must remember the commandment ‘to forgive and to ask for forgiveness.'”

Ukraine wants to send a hard lesson to its neighbor.

The Ukrainian Parliament’s Committee for Foreign Affairs called Poland’s resolution “anti-Ukrainian” and feels it “cancels out all constructive political and diplomatic developments and efforts by two the states and [two] peoples directed toward mutual forgiveness and reconciliation in memory of the innocent Ukrainians and Poles killed [at the time].”

The Radical Party, represented in Ukrainian Parliament, also condemned the Polish resolution, as it could negate the “positive results” achieved by a “decade’s worth of dialogue” between the two countries. The Ukrainian nationalist Freedom party called the Polish Parliament’s reference to genocide “a stab in the back,” and “absurd from the point of view of international law.”

The Ukrainian version of events that took place decades ago counts between 8,000 and 30,000 Polish victims—not 100,000. In Ukraine, this is called a “tragedy,” as opposed to a “massacre,” or a “genocide.” Ukrainians also want the Poles to note there were massive numbers of Ukrainian victims killed by the Poles.

Recent changes to the Ukrainian process of “de-communization”—like renaming “Moscow Prospect” in Kiev to “Stepan Bandera Prospect”—have the potential to develop into serious irritants between Poland and Ukraine. New Ukrainian Army military uniforms, for example, feature details reminiscent of the WWII-era Ukrainian Insurgent Army’s collaboration with the Nazi regime. Following the UPA-UNSO resolution, the Ukrainian Army re-introduced a design similar to the German Iron Cross.

Calling it a “victory of emotions,” Ukrainian Foreign Minister Pavlo Klimkin expressed concern over the resolution. “We are troubled by the document,” he declared on Facebook.

For his part, Ukrainian Ambassador to Poland, Andrei Deshitza, blames the Russian Secret Service for instigating Poland to adopt the resolution—but did not provide proof to back up his statement.

Petro Tyma, head of the Ukrainian community in Poland, thinks the resolution is a step back in Polish-Ukrainian relations. He does not believe the number of Polish victims—100,000—is an accurate figure. There is no proof, Tyma says—but admits he is relieved the number is not larger, like that proposed by representatives of the “radically-minded Kresowiaks,” descendants of Polish territories given to Ukraine by Stalin.

He does not think the word “genocide” can be used to describe the Volyn tragedy. “Genocide” implies the total defenselessness of one side, an inability to protect itself—which he does not believe was the case. “There were plenty of aggressive acts against Ukrainians—annihilations of Ukrainians,” he noted. “We cannot talk about genocide here.”

According to Vyatrovich, the resolution has nothing to do with commemorating the memory of  innocent victims. Rather, it is a tool to achieve political dividends. He believes the decision will strengthen the force of anti-Ukrainian waves crashing over Poland.

In an interview with Polish newspaper Gazeta Wyborcza, Yuriy Shukhevich, Ukrainian Parliamentarian and son of the leader of OUN-UPA, said the Polish Parliament’s declaration of “genocide” was “a regular stab in the back” to Kiev from Warsaw.

“This is [nothing but] post-colonial manipulation,” Shukhevich said. “In this sense, you [Warsaw] behave toward Ukraine in the same way that Moscow does. On July 22, your Parliament demonstrated post-colonial and post-imperialist mentality—like Moscow. Do you think I don’t know what the Poles are hiding, inside their hearts?” According to Shukhevich, Poland has stabbed Ukraine in the back. “My father’ s comrades from the UPA often told me that when they were fighting the Soviets or Germans, the Polish [Home] Army (Armia Krajowa) was only waiting for a chance to stab them in the back.”

Shukhevich considers the classification of the Volyn massacre as a “genocide” to be “hypocritical,” provocative and “chauvinistic.”

“Nothing in the declaration talks about the brutal occupation of ethnic Ukrainian lands by the Polish Second Republic—about burning down our churches or about the fact that they were taken away from us with force by Catholics, about the police ‘pacifications’ of the villages, deportations, expulsions, or about the fact that the word ‘Ukrainian’ itself was banned [by Poles], who called us by the humiliating name of ‘Rusyns.'”

According to Shukhevich, the Poles considered Volyn a source of cheap labor—slave labor, in fact. He noted that, in 1943, the Ukrainians organized anti-colonial partisan uprising against the Poles.

Almost immediately after the Polish Parliament passed its resolution commemorating the victims of the Volyn genocide, a bill was introduced to the Ukrainian Supreme Rada by deputy Oleh Mousiy, entitled “On the genocide committed by the Polish state against Ukrainians in the years of 1919-1951.”

“Everybody learns the lessons of history—this is our vaccination from repeating them,” he said. According to Mousiy, in the first half of the 20th century, Poland enforced an “anti-Ukrainian, chauvinistic state policy.” In his bill, the Ukrainian parliamentarian stated that together through “physical annihilation” of the inhabitants of Eastern Galicia and Volyn, Poland, in her politics, used “‘Polonization,’ pacification and deportation” as means of genocide toward Ukrainians.

Speaker of Polish Parliament, Stanislaw Karczewski, called this Kiev’s initiative a bad idea. “This is just some kind of political counter-attack,” he said. “What’s happening is bad—and it’s bad that such a [Ukrainian Parliament] resolution will be passed,” he told Polish talk radio.

But Ukraine wants to send a hard lesson to its neighbor.

On August 25, some 90 most prominent representatives of the Ukrainian political class and of her intellectuals called on the Supreme Rada to establish not one but three Remembrance Days for Ukrainian victims of crimes committed by Poles.

Among signatories of the petition are the first Ukrainian President Leonid Kravchuk, former diplomats, Ukrainian dissident Levko Loukianenko, and a number of distinguished Ukrainian writers and historians.

The list of signatories is open for additional patriotic Ukrainian underwriters who will obviously appear in sufficient numbers to give the petition an aura of overwhelming demand.

“Many Ukrainian politicians are fighting not for the truth but for political benefits, [and] perceive relations with Poland as confrontational,” said Michal Dworczyk, a representative of the ruling Polish party, Law and Justice. “Mr. Kravchuk, who until recently had been signing different kinds of unification appeals, now shows his true colors, proving that all his previous acts were a special species of lies and political games, with concrete political benefits.”

For sure, Leonid Kravchuk, former member of the Politburo of the Ukrainian Communist Party and former chairman of the Supreme Soviet of the Ukrainian SSR, has had many contradictory opinions over the course of his long political career. But old wounds have opened between Ukraine and Poland, and there is no sign they will heal any time soon.

To the detriment of both countries. And to the euphoria of “their eternal common enemy.” 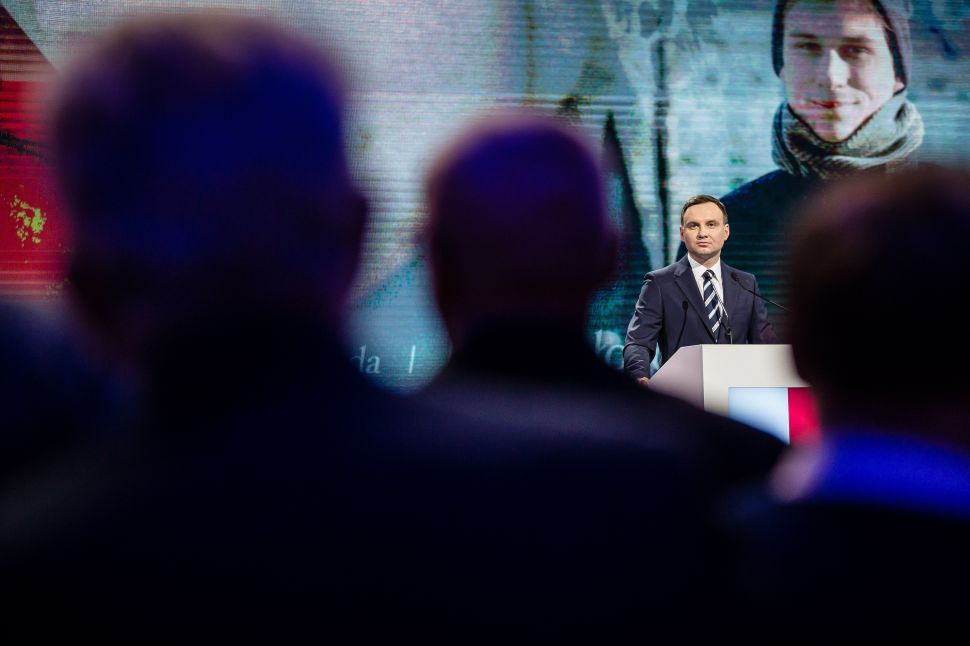