A crowd of a few hundred filled roughly three-quarters of the sixth-floor ballroom at the Marriott Marquis in Times Square, the same building where Donald Trump accepted the New York State Conservative Party nomination on Monday. Pro-Second Amendment t-shirts mingled with posters for marijuana legalization, while a playlist identical to the one socialist Vermont Sen. Bernie Sanders blasted at his famously feverish rallies—John Lennon’s “Power to the People,” Tracy Chapman’s “Talking About a Revolution,” The O’Jays’ “Give the People What They Want,” Neil Young’s “Keep on Rockin’ in the Free World”—unwound over the loudspeakers.

The radical soundtrack contrasted with promises from the candidates, both Republicans elected in largely liberal states, that they would pursue moderate policies domestically and military restraint abroad.

“We’ve got a six-way freeway up the middle of the electorate,” Weld declared from the podium, quoting one of his running-mate’s favorite lines.

Johnson similarly presented the ticket as a safe alternative toward Trump’s personal and political impetuousness and the leftward tilt of the Democratic Party.

“What Bill Weld and I are going to bring to the table, more than anything else, is just certainty. Certainty that taxes are not going to go up, certainty that when, when, when approached, or given tax reduction, we’ll always sign off on tax reduction,” he vowed. “Certainty that when it comes to rules and regulations, and your and my ability to live our lives more simply, in compliance of course with being good human beings, that we’ll be able to do that.”

Johnson punctured the pair’s wonkish, intellectual image earlier this week when he answered a question about the Syrian civil war on MSNBC by asking “What’s Aleppo?” The New Mexican businessman-turned-pol worked to make up for it by opening his remarks today with an apology.

“There is an opportunity to bring peace to the world, and all of us care about this so much, and here it is I blow it on this whole ‘what is Aleppo?’ And I’m sorry for that,” he said, after stammering through a description of the various groups and interests grappling in the region. “I care about the fact that American men and servicewomen are losing their lives and they’re getting injured and that they’re getting, that they’re turning back with afflictions that we need to deal with perhaps for the rest of their lives. And I care about the fact that there are innocent tens of thousands of people innocently being killed throughout the world.”

The slogan on the campaign shirts in the audience—”Credible. Proven. Capable. Honest.”—similarly belied the duo’s subversive mission of undermining the entrenched two-party system. Only Independence Party Chairman Frank MacKay, who officially backed the two libertarians earlier this week, vented at the political establishment, and insisted the Johnson/Weld ticket represented an unprecedented opportunity.

“Johnson and Weld are a major slate that anybody in the United States can vote for. They’re on the ballot in all 50 states,” he continued

The Independence Party endorsement means Johnson’s name will appear twice on the ballot in New York, just as Hillary Clinton’s will on the Democratic and Working Families Party lines and Trump’s will on the Republican and Conservative Party rows. The party has a troubled history, with authorities freezing its assets in 2011 after Manhattan District Attorney Cyrus Vance filed charges against an operative who had funneled money former Mayor Michael Bloomberg had donated into a sham poll-watching operation.

The party has traded accusations of corruption with Westchester County Executive Rob Astorino, a Republican. MacKay was not implicated in the Bloomberg scandal, and information he furnished to the press helped expose Haggerty’s wrongdoing.

The crowd shaded young—young enough that MacKay’s invoking of Ross Perot only drew the sparsest applause—and white, though exceptions abounded. Thunderous applause answered each of Johnson’s pledges to slash taxes and regulation, curtail gun control, end the War on Drugs, reduce police abuse and mass incarceration, balance the budget and deflate the expanding powers of the presidency.

The two governors constitute probably the most qualified third-party ticket since Theodore Roosevelt and Hiram Johnson headed up the Bull-Moose line in 1912. But the latest polls put them at just nine percent, six points short of the threshold set by the Commission on Presidential Debates—a joint creation  of the Democratic and Republican parties—for entrance into the scheduled candidate forums. 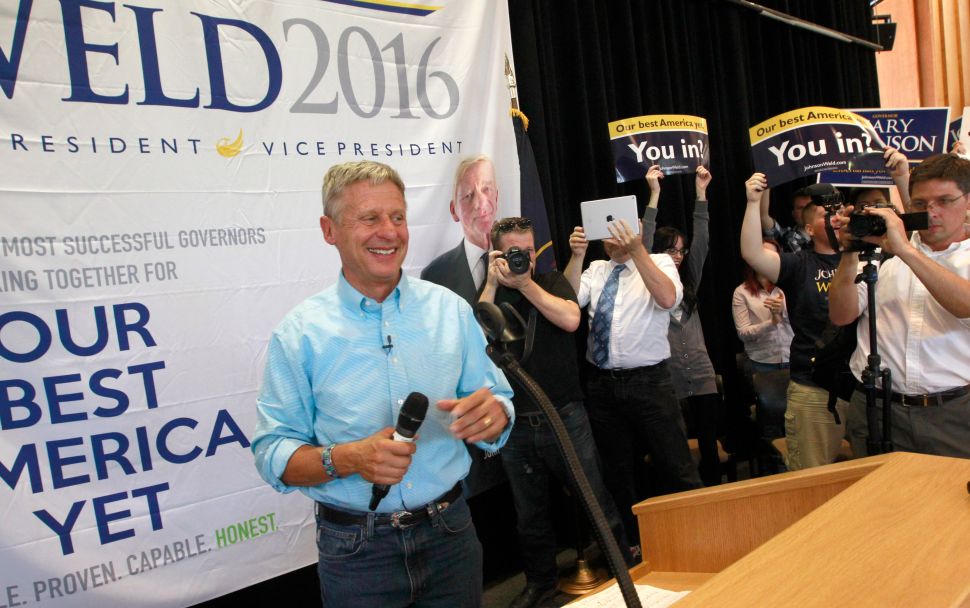