Did the design teams at fashion’s most storied houses—Gucci, Saint Laurent Paris and Givenchy—have an unconscious premonition of the passing of David Bowie and Prince in 2016? The offerings from these labels for this season could easily have been lifted from the psychedelic wardrobes of two of pop’s most flamboyant dressers.

“There has always been a peacock element in the best men’s fashion, and this particular incarnation has been bubbling since last year, particularly at Gucci,” men’s fashion blogger Marcus Jaye, a.k.a. The Chic Geek, told the Observer. ���Cast your mind back to the heyday of Jean-Paul Gaultier in the 1980s. The swaying kilts, striped Breton T-shirts and eyeliner on the male models were looks equally as extravagant as anything on the female runways. This is definitely not the first time we’ve seen this gender-blurring moment in fashion.” What is different for Fall 2016 is the reach of this new masculine glamour. The flamboyant edge will be everywhere, according to insiders, and this time, the fashion feeling will catch on.

Eyeliner-adorned, sparkle-dusted musicians Ariel Pink and Connan Mockasin embody the current menswear moment and link what’s happening on the catwalk to wider culture, particularly music. It’s a cross-fertilization that Hedi Slimane at Saint Laurent Paris mined before his departure. It was hardly surprising that Slimane should debut his Fall 2016 menswear offering in L.A., rather than Paris this past February. The designer has made L.A. his home for the past several years, finding rich creative pickings in the colorful downtown music scene. Rock-star colour-blocked bomber jackets appliquéd with wedge shapes of leopard-print, skinny jeans and wafting fringed scarves could just as easily have been spotted on the stage at the Viper Room as on the Saint Laurent Paris catwalk. Blink and you could have been at a gig, albeit one with a mosh pit peopled by skinny, gender-indeterminate waifs.

These ultra-flamboyant nongendered clothes are reflecting the millennials reluctance to be defined by one sexuality or even a specific gender. It’s an attitude controversially satirized by Benedict Cumberbatch as the nongendered model “All” in Zoolander 2. “Another reason for this trend is the mash-up of women’s and menswear on the show schedule,” explained Ryan Thompson, co-founder of the website Conversational Style who also writes on men’s fashion for the Financial Times. “I give it another year before the separation of men’s and women’s show schedules breaks down completely. Burberry have taken the lead on this and will show both collections during the same show. When a global luxury fashion house makes that kind of decision, it’s only a matter of time before everyone else falls into line.”

Cross-dressing, boys as girls and vice versa, and genderless fashion are all just a marketing gimmick of high fashion and have little trickle-down effect on the high street?  Not so, according to Nicola Formichetti, artistic director at Diesel, the Italian streetwear label. Formichetti, who worked closely with Lady Gaga as her stylist, has presented his last two collections as completely unisex with no separation between menswear and womenswear collections at all, akin to a fashion version of Calvin Klein’s groundbreaking unisex CK1 fragrance from the mid-1990s. Yet when it comes to T-shirt, jeans and sportswear, perhaps this approach is not so hard to grapple with. After all, men and women have been dressing similarly when it comes to casual sportswear for decades.

At the highest end of the fashion spectrum, the designer who is most responsible for this new gender-blurring extravagance is Alessandro Michele at Gucci. The designer, who honed his skills at Fendi before joining Gucci under Tom Ford, carefully measured out his flamboyance until he was given the reigns at the beginning of 2015 to turn around the dipping sales of the house. His authentic, eclectic talent has more than delivered. Gucci’s last sale quarter is 4.5 percent up on the same period the previous year.

Michele’s men’s suits carry Russian-doll inspired embroidery, designed to be worn with flock effect granny coats or pony skin capes. Notably, female models shared the runway in the show, wearing clothes that were virtually interchangeable with the men’s. As far as fashion at this level is concerned, it is just not possible to be too flamboyant, colorful or confident with your style.

“If you wear a suit to work everyday, for instance, the likelihood of you wanting to wear a pussy bow blouse by Gucci with it is probably low,” said Teo van den Broeke, style director U.K. Esquire. However, if you are drawn toward a buoyant scarf, jewelry or strong colors, more flamboyant details could be next because they are becoming so much easier for the average guy to find retail-wise. And these collections are gaining huge traction with Instagram. “I call this a new mood of maximalism in menswear,” said van den Broeke. “Men are being actively encouraged to be wild with their wardrobes. It’s exciting and feels far more liberating than almost anything that has come in recent years.”

For so long, men have harked back to the 1970s fashion sense of David Bowie and the glam rockers for flamboyant inspiration. Perhaps, 2016 will be the start of a new legacy. 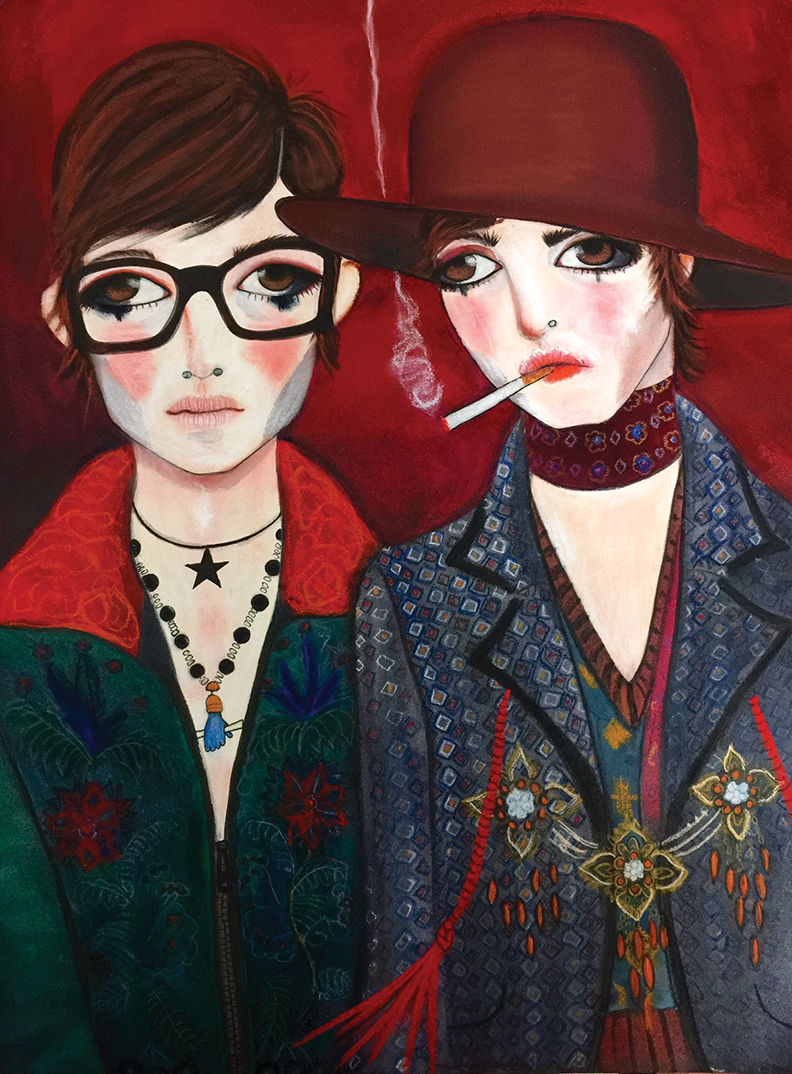