‘Twer this a more refined conversational space, I may have posited the theory that tonight’s episode of Gotham, “Burn the Witch”, was a deep, sophisticated allegory for race relations in America under the current political climate. I’d point out how Oswald Cobblepot garnered a niche yet vocally devoted following through simple fear-mongering, how he mobilized Gotham‘s already frightened populace by demonizing a minority group–“monsters”, he calls them–whose only crime really is being born different, whose only misdeed is being products of their environment. In fact, if I really wanted to–which I don’t. I definitely don’t, so don’t @ me–I could point out that the closing minutes of the episode, in which Oswald Cobbepot is lifted triumphantly on to the shoulders of a full-fledged, riotous mob as the bodies of Hugo Strange’s experiments burn is a warning–NAY, a prediction–of what will transpire should we as a nation choose to elect a rabble-rousing demagogue into the highest office in the country come this November, a fiery image of a world gone mad to rapturous applause, as the last vestiges of civilized humanity turns to ash.

But no haha that’s silly. Let’s all watch Alfred do a dance.

So I have a lot of questions about this particular episode of Gotham, most of which revolve around the show aging up Ivy Pepper via sewer magic, I assume because someone finally cracked open a comic book and said “Wait THAT’s Poison Ivy’s super power?? Oh, boy. Oh, no.”  But since Ivy and her newfound rosebuds constituted roughly 10 percent of the whole hour, we’ll save that conversation for later.

No, most of my bewilderment, as it does most of my waking moments and a good amount of my dreams, starts and ends with Fish Mooney. Let’s start with a simple one: Why doesn’t anyone (Other than “Marv”) in her merry band of Hugo Strange’s science-monsters have a name? We’re supposed to care about them a lot, seeing as how season 3’s narrative so far is driven solely by their reign of terror that has so far claimed a couple Rite Aids and whatever Gotham department store sells the dumbest looking capes. We’re told, over and over, that these monsters are important, that the idea of them running rampant is overwhelmingly terrifying, and I get the feeling that we’re eventually supposed to empathize with their whole “Oh, God my lazer beam eyes are slowly killing meee” predicament. But we don’t even know their names! At this point I’ve taken to identifying them by what I assume Hugo Strange mixed together in a beaker to get that result. For example, we have Tom Hardy’s Bane + 1990’s Teenage Mutant Ninja Turtles Shredder Cosplay: THBSC

And, her partner, Marvel’s Quicksilver + a decorative cupcake:

Simple enough, but here’s a follow-up: Why do only some of them have dope-ass costumes, and the rest are dressed as your run-of-the-mill homeless person with electricity powers? Did they all raid dumpsters after escaping from Arkham but only a few were lucky to get the dumpster behind the Party City down on 6th Street? Really, my only concern is why Fish is stilled dressed the way she is, other than the fact that the only way to make Jada Pinkett-Smith’s performance even more campy would be to just attach a tent to her head.  Oh, well. Small quibbles, I suppose.

Speaking of quibbles, Jim Gordon. I barely spoke about Jim last week because, well, he didn’t really do much besides raid the wardrobe of an angsty teen and somehow, against all the known laws of faith and science, grit his jaw more than he usually does. But this week, oh, Jimbo ya done goofed. In the span of one hour Gotham-time Jim was outsmarted by an enterprising journalist, unable to catch Fish Mooney, an escaping Hugo Strange or any criminals whatsoever–monstrous or otherwise–and to top it all off he decides to kiss said enterprising journalist at the very same moment Leslie arrives back in Gotham on the world’s steamiest train. I love how even Ben McKenzie is so far riding this season out with a permanent yiiiiiiikes stuck on his face: 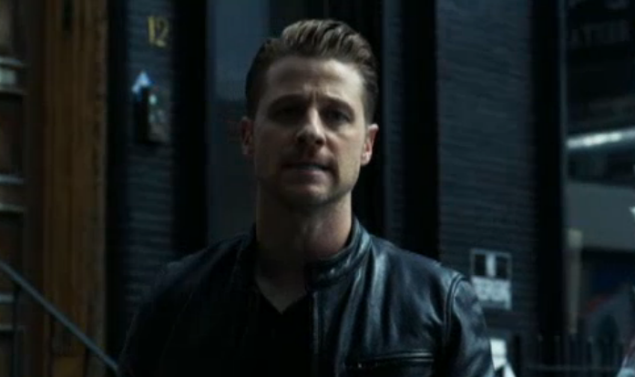 The one scene I’ve gone back and forth on is the climactic stand-off between Oswald and Fish outside Nameless Science Facility / Mansion Outside Gotham. On one hand, there is a clever, nearly-moving bit of symmetry happening here. After all, it was Fish who gave Oswald his “Penguin” nickname in the first place, and the actual beating heart underneath this show’s carnival of nonsense has been Oswald’s endless crusade to turn that name from an insult into a title worthy of respect and fear. Without Fish, there is no Penguin, and now with just one pull of a trigger from Penguin, in an instant there could be no Fish. It helps that Robin Lord Taylor is a treasure, and that this may be the only scene in this show’s history in which Pinkett-Smith dialed it down from 11,000.

But, on the other hand, this is probably the least earned development on Gotham since the show decided Ivy needed to be hot now. Fish has never shown this level of respect for Oswald, even subtly, and at no point was I convinced her argument about “destroying the thing you create” is strong enough to sway Oswald to let her go. It just happened, because the story needed to happen. And the real crime? All this drama came at the expense of an appearance by BD Wong as Hugo Strange, which is a actor-to-role matchup worthy of minimum 19 Emmy Awards and the 2015 Nobel Prize in Economic Science (because that shit is straight $$$). I know this. Bojack Horseman knows this. I would certainly hope the Emmy voter I keep chained in that soundproof basement year-round knows this by now. But Hugo Strange feels wasted here. Save that for when you have more one-syllable words for BD Wong to pronounce using, like, 16 syllables, Gotham!

As always, let’s run down every reference, fact, and nugget of Bat-history brought up in season 3, episode 2, “Burn the Witch”

If you somehow managed to see through the absurd amount of steam coming off Leslie’s train, you would have noticed director Danny Cannon prominently featured the car number, 457, not once but twice:

Leslie Thompkins first appeared in 1976, inside the pages of Detective Comics #457 by writer Dennis O’Neil and artist Dick Giordano. It’s been a while since Gotham dropped a straight “RANDOM NUMBER ON THE WALL” reference, and I appreciate this obvious, glaring challenge to my attention to detail.

So…okay. I get it. From Poison Ivy’s first appearance in 1966, through Uma Thurman and Batman: The Animated series, and even up to her current day comic book incarnation Poison Ivy’s powers have always centered around seduction. 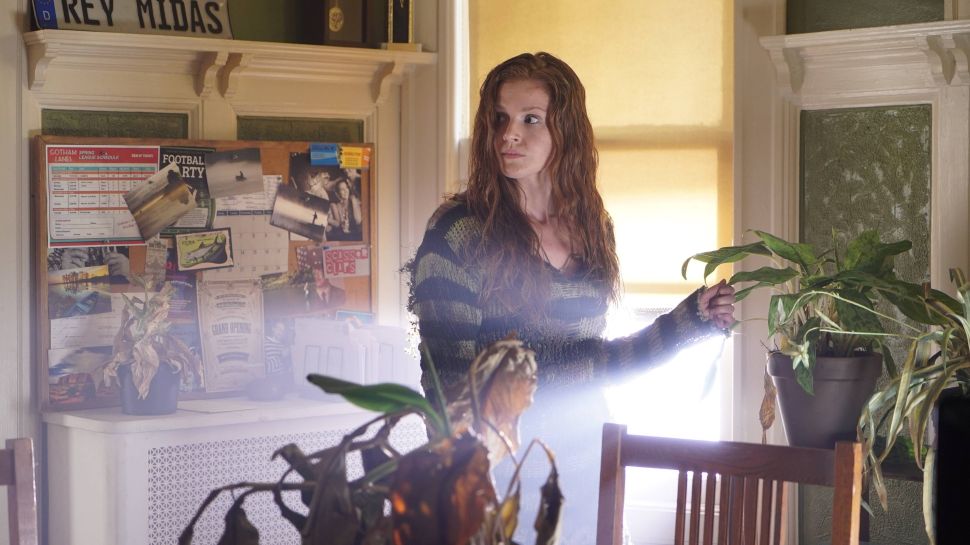