There’s an interesting thing that happens often when you interview Gotham stars David Mazouz and Sean Pertwee as a pair. The second Mazouz runs out of words to say–and though he is far more well-spoken than any 15-year-old has any right to be, everyone has their limit–he immediately looks to Pertwee for support. What other dynamic could you expect, from billionaire-turned-Batman Bruce Wayne and his ever-faithful butler Alfred Pennyworth? After two seasons playing the pair, the bond between Mazouz and Pertwee is palpable both on-screen and off. The Observer recently met up with the two actors in the lobby of the Beverly Hilton Hotel, but the synergy between them was so strong, obvious and, most of all, genuine…we might as well have been sitting in Wayne Manor.

Below, Mazouz and Pertwee discuss Gotham‘s third season, Bruce Wayne’s doppelgänger and the possibility of an upcoming Haunted Knight.

Observer: So David, you have a twin.

Can you say anything about him?

DM: The major thing for me is, I know a lot of people are saying “Oh, you have an evil version of Bruce.” Which it’s not. It’s not an evil version of Bruce. These are two completely different people that talk differently, walk differently, communicate differently. They are completely different in almost every way possible, besides the fact that they look identical to one another. And this second Bruce, the doppelgänger, was created for a very specific purpose, as will be revealed as the show goes on. But when we find him, he’s lost. He’s not evil. He has no harmful intentions, he’s just lost and looking for a purpose. The purpose he finds may not be the best one for the good of Gotham, or the good of Bruce Wayne or Alfred. He’ll have major, major effects on them. For the most part negative effects [laughs].

DM: It’s been so much fun. It’s been challenging, I’m not gonna’ lie, especially having scenes with myself. That’s been weird, as Sean can testify, too.

SP: It’s bizarre. Because you don’t know who you’re talking to. I think it would be satisfying if Clayface was put into the mix, so you’d have three Bruces. Or, you know, two Alfreds and two Bruces. Really pair them up.

You’ve been working together now for three years in this mentee/mentor, almost father figure and son role. Is it second nature at this point?

DM: I don’t think it was ever a first nature, really.

SP: We have an extraordinary relationship. I have a son that is virtually the same age as David. Going to work is one of the easiest things I’ve ever done in my life, because David is an extraordinarily talented actor, and he’s incredibly focused. And great fun. I’m blessed, really, to be working with someone–I know he’s sitting next to me right now–but someone of his skill.

SP: It’s interesting the way our relationship has changed from season one to two to three. Season three you’ll really see the relationship that everyone is accustomed to from the comic books start to develop. There’s a sense of unification to it; they’ve been butting heads so far, as you would with any teenager. The thing I’m enjoying so much about season three, the four episodes we’ve shot already, is the closeness that’s really been developing between them. There’s a sense of paternal love. There’s a marked improvement in their relationship, and we’re going towards where people feel more comfortable.

“You’ve got to get to the bottom of the barrel for Batman to rise. And we haven’t got there yet. We have to reach Hades before Batman rises from the ashes.”

It’s interesting you mention we’re reaching a point in Bruce and Alfred’s relationship that seems familiar, because it’s not often you step into a role where there is a point in the future that seems “familiar.”

SP: We’ve likened it before to, you know, you’ve got to get to the bottom of the barrel for Batman to rise. And we haven’t got there yet. We have to reach Hades before Batman rises from the ashes. There are skill-sets already instilled in him; his own sensibilities and the natural intelligence Bruce Wayne has. He’s 19 when he goes to Tibet, and he comes back at 25 fully-fledged Batman. But what we’re exploring now is the subtext of that. The slight tweaks of these character traits later on in the movies and the comic books. That’s the real joy of playing these characters at this point. We’re giving them a reason to exist.


DM: The great thing about Gotham is we have a starting point, and we have an ending point. We have an A and a B, and we’re telling the story of how you get from point A to point B. A lot of people have been saying to me “I’ve seen you grow up on the show and you’re becoming so much more authoritative and so much more of a man.” That’s kind of the point. It’s this evolution of Bruce Wayne, going from your typical rich boy to being Batman. That is the point of the show.

How much of that future, the Plan B you said, do you keep in the back of your mind when you’re performing? Or is that a distraction?

SP: I personally find it a distraction. There’s certain shades and colors you find, of course, in the books, but we’re seeing these characters being molded for the first time by this city. The show is called Gotham because it’s a city that molds ordinary people into becoming extraordinary people. In season one there was a desperation with David and I to get out there and do things, because it just felt like such a long period of time before we were a part of that world. We were stuck in the manor.

SP: But [Gotham creator Bruno Heller] was saying “No, this is the whole point!” One of my favorite scenes is when I take Bruce to Tommy Elliot’s house and he confronts the bully. For me, that was a germination of Batman. That was the most important scene that we shot, because it was the first time he’d stood up for himself, and stood up against a bully. Which is something he does later on in life.

Taking away everything you know, everything that’s already happened…what’s something specific from the mythology you want your character to experience?

DM: First thing that comes to mind–and I forget which comic it is, I’m really into them so they sort of meld together–but you know the Mad Hatter is coming to town. And one of the things that I love that I got from the comics is when the Mad Hatter was creating mayhem in Gotham, it was an emotional thing for Batman, for Bruce, because when his mom was still alive she read Alice and Wonderland to him as a boy. As a bedtime story.

So years later, when his mom is dead, and he sees that there’s this villain called the Mad Hatter, it’s an emotional thing because it brings back memories of his mother. So I’d love to play something with that. I don’t know if they will or not [laughs], but it would be great if they did.

SP: Well, we’ve already seen him to a certain degree, and I thought Ben [McKenzie] did a fantastic job with it, but one of my favorite characters was always Clayface.

You’re really all about Clayface.

SP: Well, Ben did such a great job. And what I loved was, Clayface replicated the Gordon that he saw at that specific moment, which was him being angry and cross and grough. So being given the opportunity to play yourself? I’ve always been fascinated by that. I’d love to have a crack at Clayface, because I always loved that character anyway.

And to know that he’s out there is a fantastic thing. The world is filling up, which is the point. People ask us about these other shows–The Flash, and Arrow and Supergirl–taking away from Gotham. But the things is, we precede their world. We are the reason why they exist in a way. So I don’t see us crossing over, necessarily, I see us as the germination of the entire superhero world. 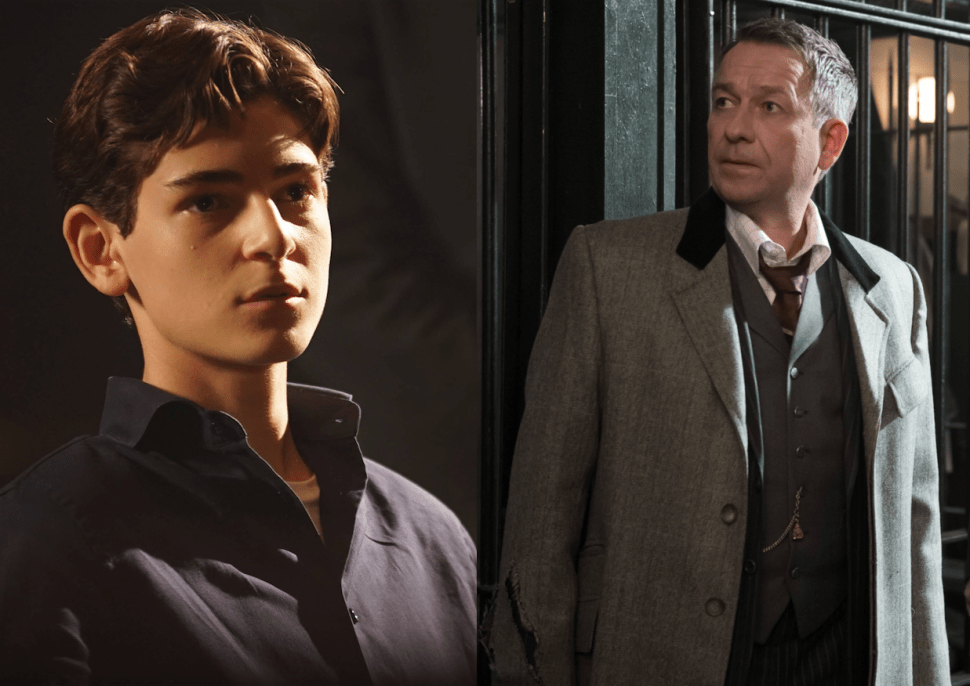