“And she was drifting through the backyard / And she was taking off her dress / And she was moving very slowly / Rising up above the earth.” While the Talking Heads song “And She Was” gave this week’s gorgeous episode of Halt and Catch Fire its title, the question of whether these lyrics from it inspired Donna Clark’s psilocybin sojourn or whether that trip is what inspired the show to use the song to christen the episode in the first place is a bit of a chicken-and-egg affair. Not that it matters either way. Too many period dramas are celebrated for pop soundtracks that are either crashingly obvious or jarringly incongruous (Stranger Things, I continue to look in your direction); Halt is so smart, so subtle at this point that its key music cue isn’t even audible, but an unplayed song woven deep into the fabric of the episode itself.

As far as outside art forms used to structure this week’s episode go, it’s not alone. Gordon Clark and Cameron Howe spend much of the hour playing Super Mario Bros. on the Nintendo Entertainment System. To a fault. They banish Gordon’s daughters, the ostensible target users of the game, in order to beat it themselves, then purchase and assemble a preposterously large projection TV screen after Gordon passes out and breaks the old one on the way down. But you can leave the idea that this is mere nostalgia-mongering in the Upside Down, because the parallels between the game and the larger story are as clever and as tight as they’ve ever been on this show, which is saying something. While Cameron and Gordon lament the game’s infamous deferral of gratification — “OUR PRINCESS IS IN ANOTHER CASTLE!” — Donna is indeed ensconced in Diane Gould’s palatial estate far from home. While Donna takes mushrooms, Cameron and Gordon’s Super Mario avatar stomps them. While Cameron and Gordon discover a warp zone to bypass the game’s difficult “ world,” Donna glides past Diane’s gorgeous in-ground pool as she begins her psychedelic trip.

It’s during this trip that Donna has her most important conversation of the episode, with her now-estranged partner Cameron. I’ll admit that they had me fooled for a while: Cam wasn’t there at all. Not exactly a hallucination, her presence was Donna’s way of asking for and receiving forgiveness for the lie she was caught in earlier in the episode, when Cameron fired their underlings Doug and Greg — a move Donna had mendaciously told her Diane had forbade them to make — then forced Donna to play along as if she’d signed off on the move in order to avoid having her lie exposed to their chief investor. Actor Kerry Bishé’s hands are constantly at play here as she lies on her back under the night sky, feeling the grass beneath her, the shirt on her stomach, experiencing their shroom-enhanced textures as she pleads for understanding. But contact with a human being is more difficult to make.

That leitmotif recurs throughout the hour. Cameron communicates with her new husband, Tom Rendon, exclusively through a private chat on Mutiny. After she flees the Clark household, she shares the news of her nuptials with Gordon via HAM radio, never seeing his reaction during a conversation punctuated with portentous silences. Gordon himself may well have hallucinated many, if not all, of his other HAM conversations, as Cameron inadvertently discovers when she finds the radio unplugged. The deal that seals Joe McMillan and Ryan Ray’s place in the future of the Internet is proffered by an unheard voice on the other end of a phone and confirmed by an unseen fax. That fax lands on the desk of Ken Diebold (Matthew Lillard, note-perfect in this role), who, outraged by Joe’s perceived recklessness, orchestrates a palace coup against him in a board meeting that takes place offscreen. While a visit from Cameron fails to convince Joe to give Gordon credit for developing the anti-virus software he subsequently stole and repackaged to make his millions, that unseen meeting does the trick: At last, Joe confesses his theft, but he does it into the lens of a video camera, his admission of guilt showing up on a monitor rather than being made person to person.

But the absence of human interaction is only half the story here. Human beings, human bodies, and their experience of the world around them drive this episode like few before it. Director Michael Morris and series cinematographer Evans Brown light their players as if coating them with gold and silver. Think of Ryan and Joe under the antiseptic white lights of the mainframe room, or against the blinding backdrop of the windows after their meeting with the board. Think of Diane and John Bosworth, rekindling their budding romance under the sumptuous chandeliers of the opera house. Think of Gordon and Cameron outlined by the sunlight through the window of their living room as they play Nintendo, while Donna sweeps through the far more brightly suffused space of Diane’s vineyard getaway.

And think of how these people look! The physical energy between Gordon and Cameron is thick and inviting enough to eat like a pastry. Both of them wear comfortable white shirts — Gordon’s a tee, Cam’s a tank — that make you want to reach out and feel the firmness of their shoulders. Joe and Ryan make a point of getting the finest suits they can to impress their prospective business partners; they are just radiantly confident and handsome in them. John and Diane’s now-easy chemistry is displayed while they’re framed against the cool brick wall of the gay bar they escape to for drinks; you can all but feel the cool air the bricks retain even as things heat up for the people sitting near them. (This makes the evening’s eventual souring, when John fucks things up by passing on going back to her place after they’ve fooled around in his car, feel like an almost physical affront to how things ought to be.) Donna, finally, is so taken by the opulence of her new surroundings that she literally takes off all her clothes to wear it all like an expensive sweater, or slip into it like a bath. And she was drifting through the backyard, and she was taking off her dress. Our princess, in another castle.

Halt and Catch Fire has hit its imperial phase. Everything is working. Goddamn, this show is good. 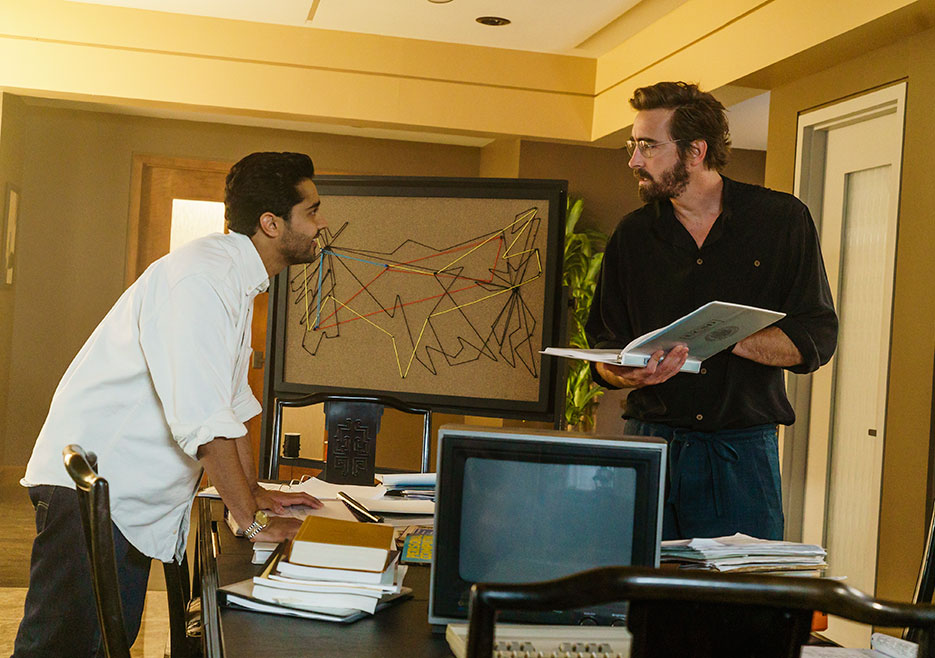