With their reputations (deserved or not) for opacity, exclusivity and fussiness, co-ops are famously the middle-school lunch tables of New York City real estate. And, as will happen in even the best regulated of tween squads, sometimes you just have to tell a person you don’t want to be friends anymore.

In other words, evict them. “It’s not easy to get rid of people,” said Citi Habitats agent Amer Jan, who has served on the board of his Kew Gardens building for the last five years. “You’re taking someone’s home.” But sometimes it has to be done.

Imagine, for instance, your next-door neighbor is a hoarder who spends his days smoking cigarettes in front of the television and occasionally starting small house fires with wayward flicks of ash. Oh, also, he and his wife have a bedbug infestation that is spreading throughout the building.

This was the situation in a case Steve Wagner, co-founder and partner at real estate law firm Wagner Berkow, handled for a co-op board several years ago. He recalled that after another resident discovered bedbugs in their apartment, the building brought in a bedbug-sniffing dog to root out the source of the infestation.

“That dog just started doing back flips in front of [the couple’s] apartment, and when they opened up the door [bedbugs] were all over the place,” he said.

‘I don’t know of any boards that sit there and say, “2W, we don’t like them, we’re going to go after them.” ’ Degenshein said, speaking of the prospect of co-op board overreach.

The building had put the owners on notice about the fires, the hoarding and the bedbugs, giving them instructions on how to remedy the problems, Wagner said. “But they just for whatever reason didn’t do any of it.” And so the board started legal proceedings to kick them out. Ultimately, the two sides worked out an agreement without going to court. The couple left their apartment, and the building sold their unit within the year.

In another eviction case Wagner worked, a resident appeared to be dealing drugs out of his apartment. He also annoyed his neighbors with smoke and loud music around the clock and was even alleged to have groped a female resident when she went to him to complain. But it wasn’t until a woman claimed she was raped in his apartment (by someone other than the owner) that the building moved to evict.

That case also settled before going to court, which, Wagner said, is fairly typical in his experience. When co-ops take shareholders to court, they generally do so under the so-called Pullman proceeding, which takes its name from 40 W. 67th Street v. Pullman, a 2003 court decision that established that co-ops could evict tenants for “objectionable” behavior.

One instance is currently unfolding in a Midtown South residential building, where the board of directors called an emergency meeting to address the misbehavior of one of its residents. The board’s attorney made a presentation proposing to terminate the shareholder’s proprietary lease, get the apartment back and recover legal fees. Citing the shareholder in question’s behavior as “increasingly more dangerous,” the attorney showed video footage and email documents  and played a voicemail recording as evidence. The shareholder, who was present at the meeting, was able to present a defense, but more than 90 percent of the shareholders voted to evict.

And although New York co-op lore is filled with tales of petty squabbles and personality conflicts degenerating into full-blown property wars, Dale Degenshein, a co-op and condo lawyer with Stroock, said that evictions more typically involve just such “objectionable” behavior.

“I don’t know of any boards that sit there and say, ‘2W, we don’t like them, we’re going to go after them,’ ” Degenshein said, speaking of the prospect of co-op board overreach. “Personalities and how people address issues with their neighbors may have an impact on an unofficial basis, the way it does with anything. And there are at times allegations that a board member has a personal gripe, but you still have governing documents that need to be followed and other people on the board to act as checks and balances.”

Nonetheless, any situation where a small group of your neighbors has a large say in your fate is ripe for a turn toward the conspiratorial. Particularly when something weird does, in fact, appear to being going on.

BOND New York agent Carole Cusani recently helped advise a friend who discovered, unexpectedly, she was being kicked out of her building. At issue was the woman’s dog, which several years ago had bit another resident. She received a warning after that incident, but it didn’t seem to take, and the dog bit another owner sometime later.

After the second nibbling, the building’s board told the woman she had to take steps to “cure” the situation, Cusani said. This involved muzzling the dog whenever they were in public spaces and taking it on the service elevator instead of the main passenger elevator.

“And she wrote a letter saying that she would comply, and she started muzzling the dog and taking it down the service elevator,” Cusani said. “But about a month or so later, out of the blue, she got a letter from the co-op’s lawyer saying that they were serving her with a notice for eviction.

“The letter was signed by the board president and said that they wanted her out in like ten days,” she said. “She couldn’t understand it because she had done what they asked her to do. So she called me up in a complete panic.”

Contacting the building’s management company, Cusani and her friend learned that the letter had supposedly been sent out by mistake. The board president, meanwhile, “claimed to have no knowledge” of the proceedings, despite his signature being on the eviction notice, Cusani noted.

“I don’t know what happened,” she said. “But in the meantime, there were five days where [her friend] was a wreck.”

Earlier this summer, the Observer ran a first-person account by comedian Bill Dawes, who said that his co-op had evicted him for renting out a room in his home on Airbnb. This, Dawes said, despite the fact that the arrangement was legal under the city’s Multiple Dwelling Law and that he had stopped renting out the room even before the co-op sent him a notice asking him to do so.

Generally speaking, unauthorized sublets are great way to get kicked out of your co-op building.

According to Dawes, the vote to evict him was nearly unanimous, with one board member telling him that he knew nothing about the case but “just wanted to ‘tow the line’ since he was in the process of selling his unit.”

To some ears, Dawes’ account might sound like a classic example of the dreaded co-op board politics. (Dawes told the Observer he is currently appealing the decision in housing court.) And compared to, say, dealing drugs and setting fires, a little Airbnb side business seems innocuous enough. But attorney Wagner said he was unsurprised the board moved to evict. Short-term rentals in residential buildings are a safety concern, he argued. “They don’t have the additional fire safety protections, the exit signs, the emergency lighting” that hotels do.

Generally speaking, unauthorized sublets are great way to get kicked out of your co-op building. Douglas Elliman’s Kathy Murray said she knows of several clients who have received letters from their boards after renting out their units without going through the proper process. It’s tempting to take a shortcut given that getting approval to sublet a co-op can be almost as tedious as getting approval to buy.

In fact, Citi Habitat’s Jan said that the one eviction his building has done during his time on the board was due to an unauthorized sublet. The owner had moved out and was renting the unit, but instead of going through the standard application process, he mailed the board a handwritten letter telling them some family members were moving in.

“And they didn’t want to do a board interview, and there was no application, and so without the board approval, [people] moved in,” Jan said. “We never got a chance to [interview] them. We didn’t even know if they were family. Our suspicion was that they were not.”

After the owner again refused to submit a proper application, the building took him to court and evicted.

Another owner proved more challenging, Jan recalled. Several years ago an older resident illegally installed a washing machine in her kitchen, which caused a mold problem that exacerbated a pre-existing respiratory condition she suffered from. She came to the co-op and demanded they remediate the mold problem.

“So we said, ‘O.K., give us access to the apartment so we can bring someone in to remove the mold,’ ” Jan said. But, afraid they would find the washing machine, she refused.

Instead, she called the city to complain, and the city sent out an inspector to look into the situation. He found the mold, but the woman somehow hid the washing machine during his visit, Jan said. “So that was never questioned.

“And, of course, the co-op is supposed to keep the apartment in good condition, so we got fined [by the city],” he said. “So there was a period of about six months to a year where we went back and forth, where she would constantly complain about the mold but would not give us access to the apartment. And we were also adamant that we wouldn’t just give her a blank check [to have the work done herself].”

The situation didn’t resolve itself until the woman moved on to that great co-op in the sky. “We found out about the washing machine,” Jan said, “when we and her family went into her apartment after she passed away.” 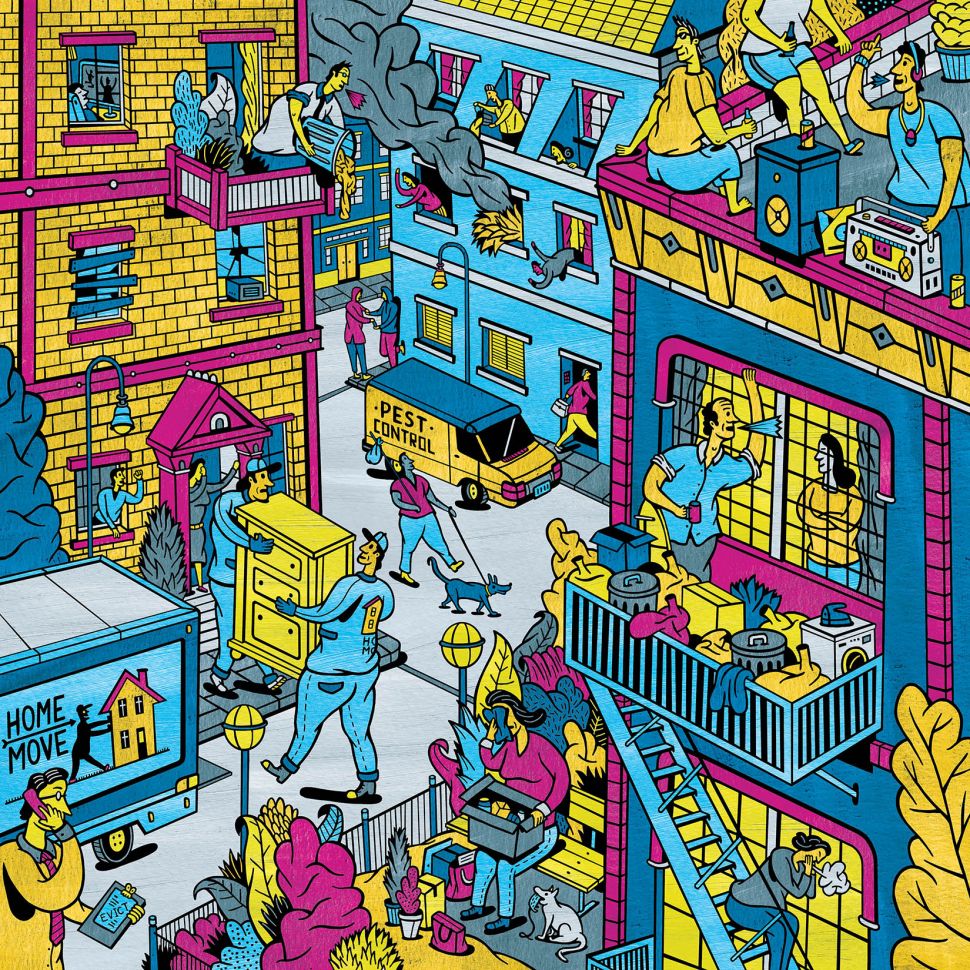