I’ll spare you the cliches: “This election is just like a reality show!” “It’s a comedy!” “You can’t write stuff like this!”

I mean, we all know Donald Trump already got his best campaign ideas on the most outrageous things 30 Rock could imagine as Republican position:

Donald Trump based his entire campaign on season 2 of "30 Rock" pic.twitter.com/Nsxu43Ipfh

But after re-watching a few key episodes from season four of Parks and Recreation today, it became obvious that 30 Rock wasn’t the only NBC show Trump binge-watched to get into the campaigning mood. I’m definitely not the first person to point out that the election between Hillary Clinton—a supremely qualified, ambitious policy wonk who can come off as a little overbearing—and Donald Trump feels a little like when Leslie Knope went up against Bobby Newport for City Council, the know-nothing son of the richest man in town who skates by on stating the obvious with a charming smile. Especially after last night’s debate, the comparison became a little too on-the-nose.

In a stand-out line from the debate, Donald Trump (who gleefully slings insults as if it were the only thing that gives him any political traction) said that Hillary Clinton’s ads against him (which largely use rhetoric from his own speeches) are “not nice.” “”It’s not nice,” Trump said. “It’s not a nice thing she’s done.”

On their fictional debate stage, the Parks and Rec writers joked about how hilarious it would be if an actual candidate for office (let along the most vicious one in recent American history) complained like a third grader.

Perhaps more than any other candidate we’ve seen in political memory, Donald Trump is vague on how exactly he plans on getting anything done. “Reduce crime rate!” Okay. “Better trade deals!” Ohhhhh, why didn’t we think of just making our deals better! “Keep our businesses from moving abroad!” Maybe want to give an actual policy on how you’d do that, Don?

Donald Trump’s policy at the moment seems revolve around just repeating the word “cyber,” saying he knows more than the generals about ISIS, saying his plan is just to ask the generals what to do about ISIS, and then that he would tell us his plan, but it’s a secret.

At least Bobby Newport was upfront about his approach to governance.

I am actually astonished Donald Trump hasn’t used this strategy yet.

Although Don, Jr. was kind enough to mention how he treats the hired help:

At dinner w our greenskeeper who missed his sister's wedding 2 work (luv loyalty 2 us) "No big deal hopefully she'll have another someday";)

A… Less Than Rigorous Adherence to the Truth

Pretend this is Katrina Pierson or Kellynne Conway and not American treasure Kathryn Hahn. Trump surrogates are trotted out onto the news daily to try to spin whatever random sentence Trump screamed into a microphone into something akin to a coherent policy.

No Firm Stance on Any Issues

For a serial philanderer who openly bragged about cheating on his first two wives, it’s difficult for Trump to take any social morality positions without sounding like a hypocrite. Hence, non-answers that satisfy his conservative base.

His VP Offer to Fellow Republicans

Even Donald Trump supporters can acknowledge this is not a man who’s a policy wonk, who wants to get into the weeds of nitty-gritty minor tax issues and complex international trade agreements. And yet it was still shocking when the New York Times wrote about how Donald Jr. offered Kasich the chance to become the most powerful Vice President in history, in charge of both domestic and international issues, i.e. all issues.

Hillary needed to be assertive without being shrill, knowledgable without being a know-it-all, funny without looking like she’s trying to hard. Donald Trump just had to not call President Obama the N-word or physically punch someone in the face.

This is Donald Trump’s signature move! He knows a guy who moved a plant down there—that means it’s definitely true!

Leslie Knope is told she’s unlikeable. She’s called a bitch. Her agenda in Pawnee gets thwarted again, and again, and again as her character gets mocked and her efforts go unappreciated. And yet she keeps working, because she loves what she does.

Donald Trump is somehow, incredibly, even worse than Bobby Newport. Yes, like Trump, Bobby Newport is also the son of a wealthy man, is also grossly under-qualified, also only running for political office to stoke his own ego. But Bobby Newport was just dumb, never cruel. He did not stoke racial vitriol. He did not mock or diminish Leslie; he was selfish, but obliviously, not maliciously. Bobby Newport was a spoiled son of privilege, but he was not a bully. Paul Rudd is handsome and charming where Donald Trump cannot even play the part of friend without adding a line to brag about how good of a friend he is.

Donald Trump is all aggression: towards women whose bodies he criticizes, towards Gold Star parents, towards the media, toowards anyone he feels criticizes him in any way. His followers send me death threats and racial epithets for being a Jew half-a-dozen times a week. This is a man who cut off healthcare for his infant nephew with Cerebral Palsy because of a family spat. This is a man who lied about having friends die in the attacks on 9/11, who routinely fails to pay contractors and then declares bankruptcy before they can get the money they were owed. This is a man who sees avoiding paying taxes, the most basic agreement between individual and state, as something that makes him “smart” rather than something that undermines his patriotism, and his ability to participate as a citizen in this nation.

Bobby Newport is a fun, silly character. Sure, Leslie Knope deserved to win the election because she was more qualified, but that’s not always how politics works. If Donald Trump is able to become the President of the United States, I won’t be certain that politics work at all anymore. 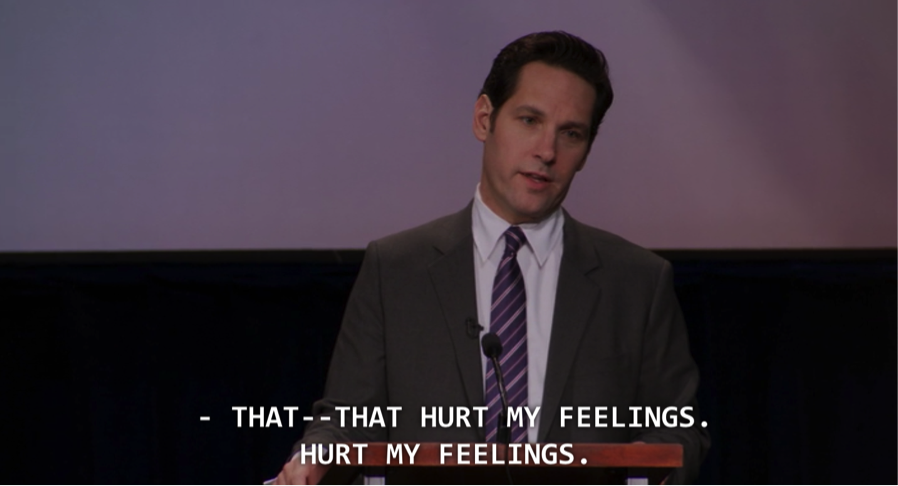