Poor Sean Hannity. He went all the way to Cleveland to tape a “town hall” with Donald Trump on Wednesday.

We know how good a show it would have been, too. Hannity and audience members would ask easy, softball, setup questions to “Mistah Trump,” as Hannity calls the large, loud, orange-and-yellow demagogue.

The Republican presidential nominee would offer canned answers. Hannity would nod with a serious expression. “Yeah,” he would say, “Yeah,” as Trump would soft-peddle his toxic mix of racism, religious bigotry and “law and order.”

The whole mess would air on Fox News Channel in the usual Hannity show slot at 10 p.m., an unofficial free, 60-minute infomercial for Trump’s campaign against the Democrat Hillary Clinton.

After yet another police shooting of yet another black man, protestors in Charlotte, N.C., forced all the cable networks to cover angry demonstrations live on Wednesday night. Same thing Thursday night. This victim’s name was Keith Scott.

Hannity’s “town hall” with Trump didn’t air and, by now, it must be stale.

With the first televised debate scheduled for Monday, we may never get to see this historic edition of Hannity’s bromance with the authoritarian business tycoon and TV star.

And, speaking of history, one might even wonder how much longer Hannity will hang around the old Fox hole.

The place is roiling with all those Fox women leaving and Roger Ailes, the former Fox emperor and Hannity worshipper, getting forced out due to a sexual harassment scandal.

Further churn of talent is expected after the Nov. 8 election. Maybe Hannity will get a better job.

Perhaps, when President Trump is sworn in on Jan. 20, Hannity will become White House press secretary or Minister of Information when Trump springs on the United States “a new government,” as he’s been promising lately (instead of a “new administration,” which is something quite different).

Hannity’s White House resume will include a sneaky deal he pulled recently for a Trump commercial. Without Fox’s knowledge or permission, Hannity frothed about “Mistah Trump.”

“He’s a guy who will vet refugees to keep Americans safe,” Hannity said in the commercial. “And, of course, he’s gonna build that wall. He says he’s gonna have Mexico pay for it.”

A Fox spokesman told The Washington Post that Hannity “will not be doing anything along these lines for the remainder of the election.”

Oh, but yes he will—in his own way.

“You’ve got a President of the United States of America who is a lawyer, for crying out loud,” Hannity said. He added that Obama too often reacts too soon to “high-profile” killings of African-Americans by police —yet Hannity also criticized the president for not reacting this time.

This was Hannity’s way to steer the conversation away from police killings to “black-on-black” crime, a theme that dovetails nicely with law and order.

Funny coincidence: In 1968, Ailes aided the campaign of Richard Nixon by stressing the “law and order” theme borrowed from the racist George Wallace. Another funny coincidence: Ailes is working in the shadows for Trump.

Hannity kept it up. He kept repeating words that that some protest marchers in the “Black Lives Matter” movement have chanted in the past.

Now, some viewers might have gotten the impression the Charlotte protestors chanted these things, especially with how Hannity kept repeating them.

But it’s really just something Hannity heard more than a year ago and he continues to use it to smear the entire movement, as well as the Obama and Clinton.

“How wrong the president had been,” Hannity said. “How wrong Hillary Clinton has been. How wrong it is for them to embrace Black Lives Matter.”

Eventually, his diatribe annoyed Geraldo Rivera, one of the token liberals in the Fox hole.

“The ‘pigs in a blanket’ business, I’m not sure how many times that really happened,” Rivera said.

Hannity replied “One time is too much.”

Instead of filling it Wednesday and Thursday in a “fair and balanced” way, Hannity turned primarily to Newt Gingrich and Rudy Giuliani, both loyal shills for Trump.

Gingrich (R-Fox) said “Liberals would rather see people killed than to have aggressive policing.”

Giuliani (R-Fox) said he would have put a stop to the Charlotte demonstrations with the heavy hand he showed as mayor of New York.

Occasionally, Rivera interjected stuff like “We have to recognize that too many black men are being killed in questionable circumstances in conflicts with cops.”

Hannity didn’t care to hear it. He countered with the non sequitur that 3,660 Chicagoans have been murdered since Obama took office in 2009. (What, you didn’t know?)

He said it was all the fault of the Democratic party which, he said, is controlled by the teachers’ unions. Continuing to free-associate, Hannity recalled the 2012 killing of Trayvon Martin by George Zimmerman, who was acquitted.

Zimmerman became Hannity’s best friend forever after that homicide in a confrontation instigated by Zimmerman.

“George Zimmerman was screaming for his life,” Hannity said. Martin, before becoming dead from Zimmerman’s bullet, was “grounding and pounding” Zimmerman’s head into the concrete and pavement, Hannity said, although this incident had nothing to do with Charlotte.

It’s a wonder he didn’t invite Zimmerman on as a guest. After another brief remark from Rivera, Hannity handed the response over to the man he praises as “America’s Mayor.”

“This is going to turn out to be a justified shooting,” Giuliani said of the Charlotte homicide. “People like my good friend Geraldo are part of the problem here. There aren’t two sides to this story. There’s just one side. It’s called the truth.”

Hannity then asked North Carolina Governor Pat McCrory about a video that Hannity said shows the dead man with a gun before being shot to death by police in his “open carry” state.

HANNITY: “Can you confirm whether or not there is a video tape that will corroborate what the police chief said?”

McCRORY: “I will not confirm that. It’s up to the police chief to give those direct answers.”

By Thursday night, the dead man’s family and lawyer had viewed the video and came to different conclusions than those expressed by Charlotte officials and Sean Hannity.

The lawyer and the family wanted it released and demonstrators were chanting things like “Show the tape!” Even Giuliani said it should be released, something Hannity argued vigorously against the night before.

If it is released, we can look forward to watching it on Hannity on Fox, maybe as much as the Benghazi fire. Which makes us free-associate to something moderator Lester Holt of NBC might ask Trump in Monday’s debate:

“Mr. Trump, you’ve just advocated unconstitutional ‘stop-and-frisk’ tactics against black citizens because, you say, it will allow police to take their guns away. Yet, you’ve been endorsed by the National Rifle Association and you’ve warned that Hillary Clinton wants to destroy the Second Amendment. How can you hold these two obviously contradictory positions at the same time?”

If Holt can’t work it in, maybe Hannity will in his next town hall with “Mistah Trump.” 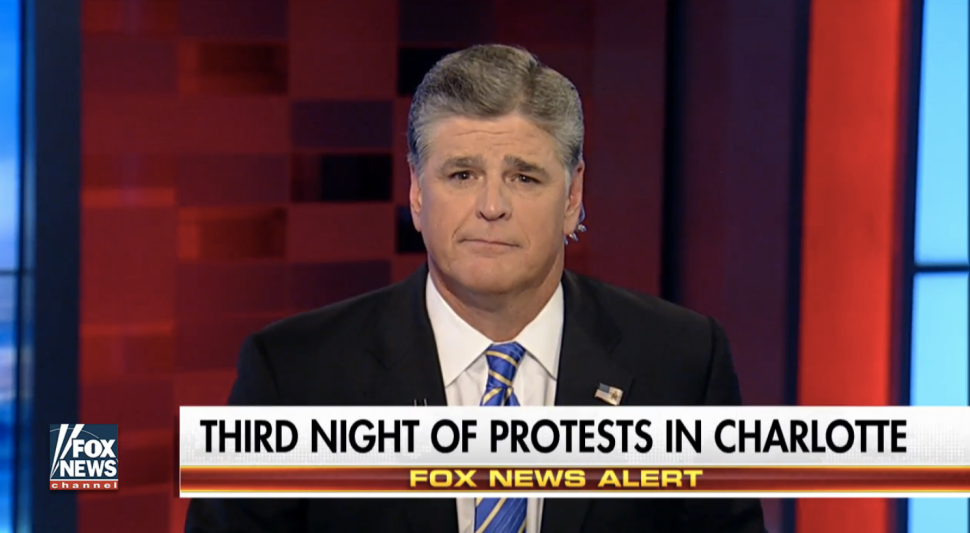