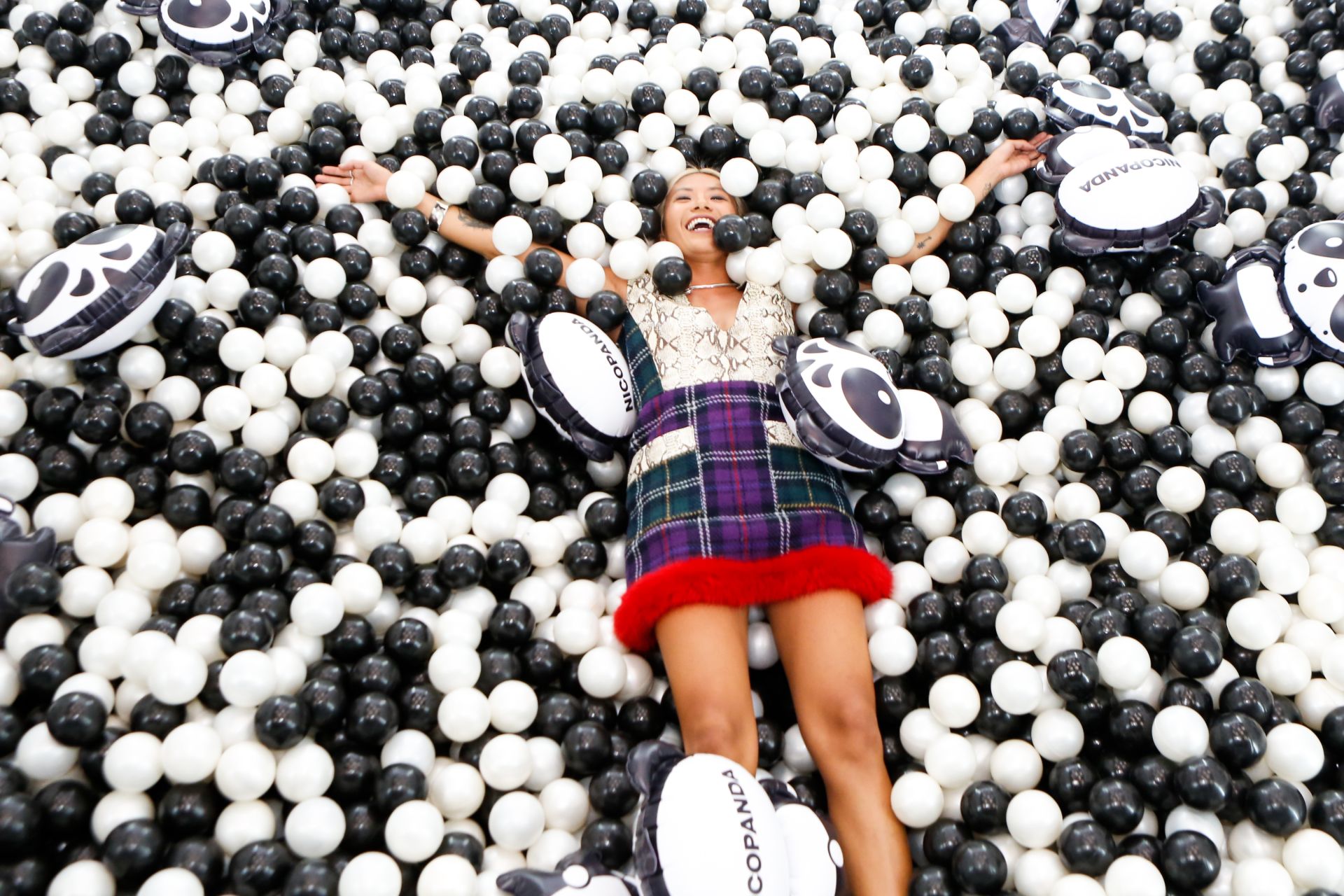 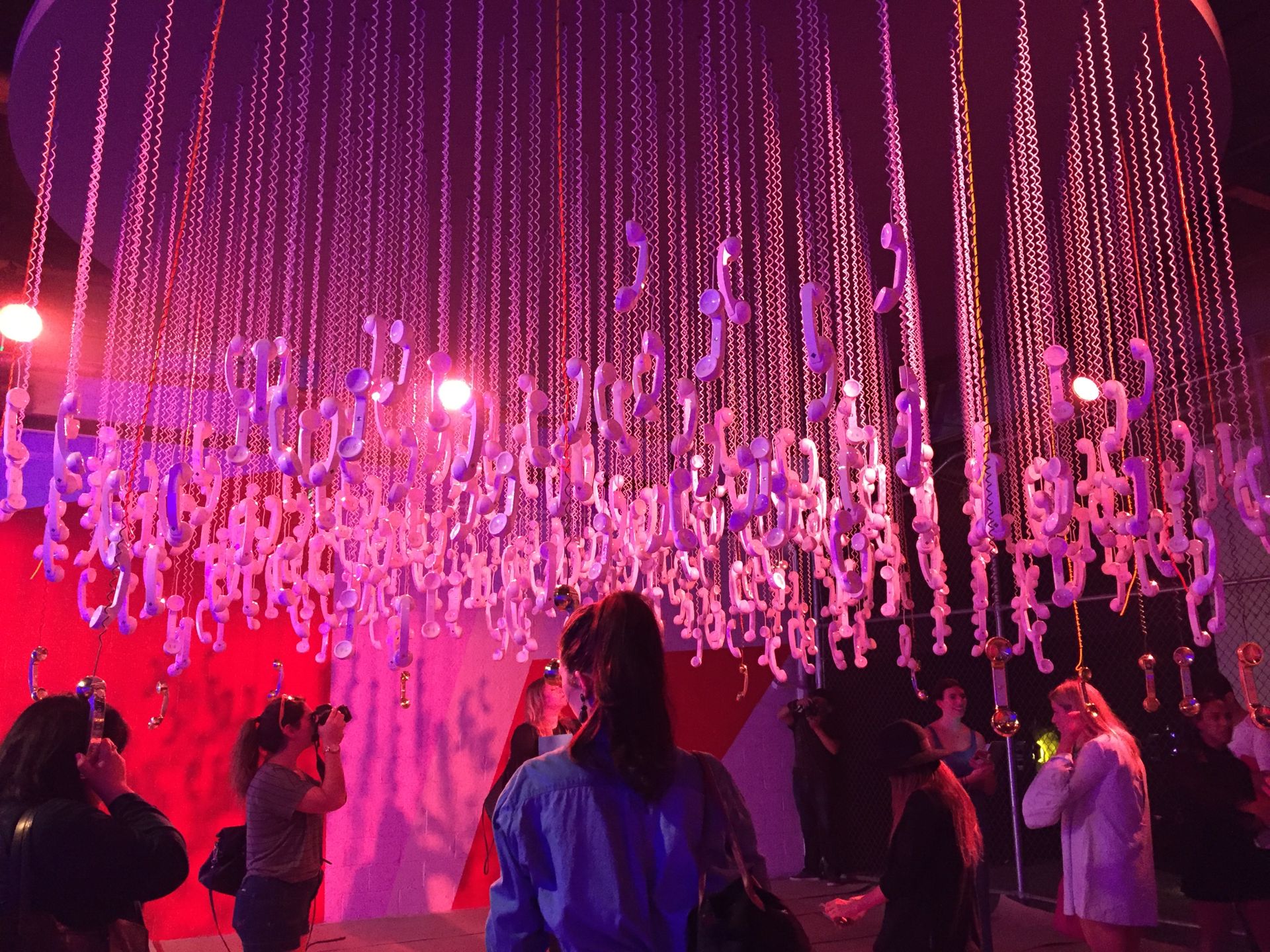 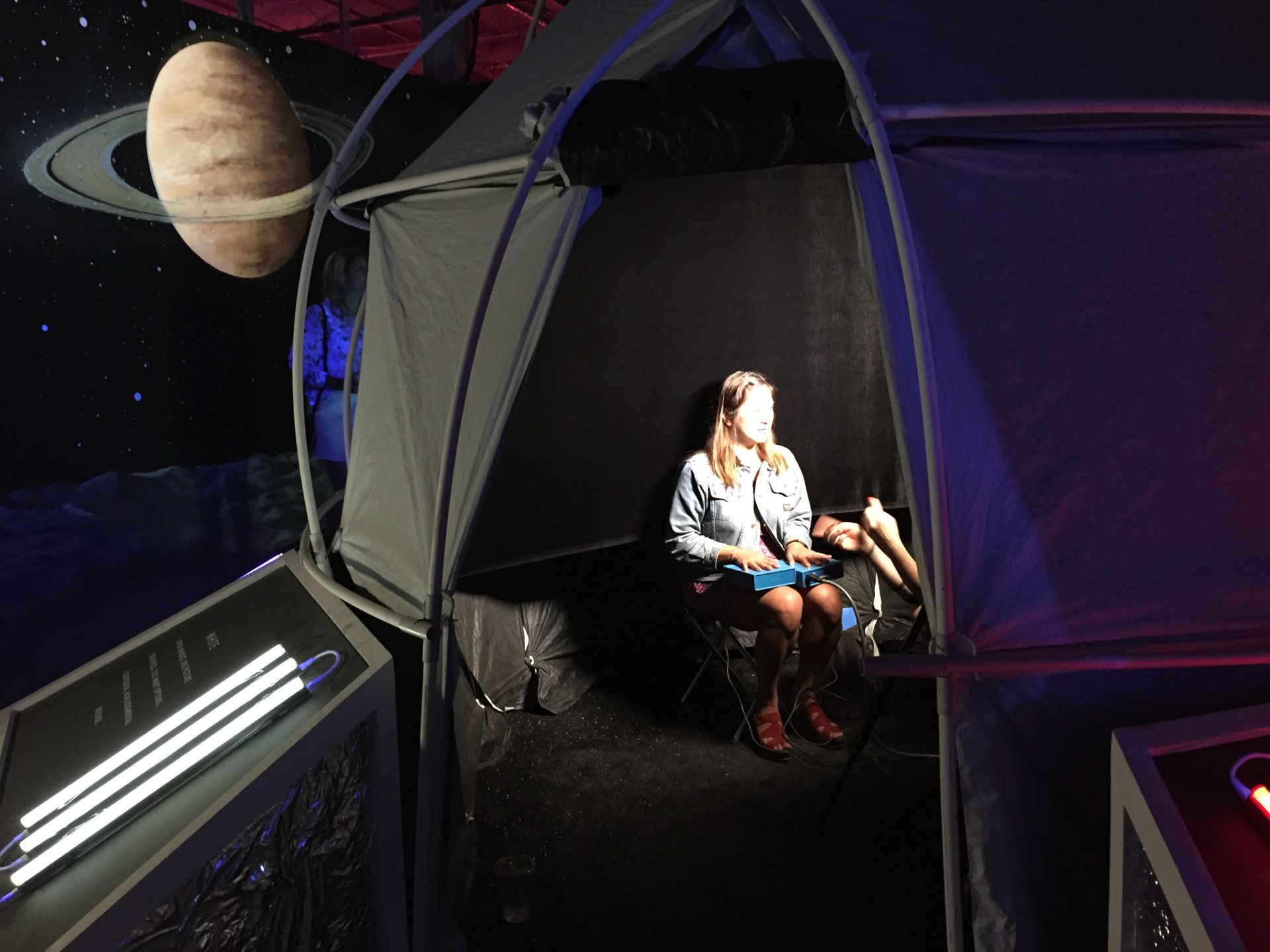 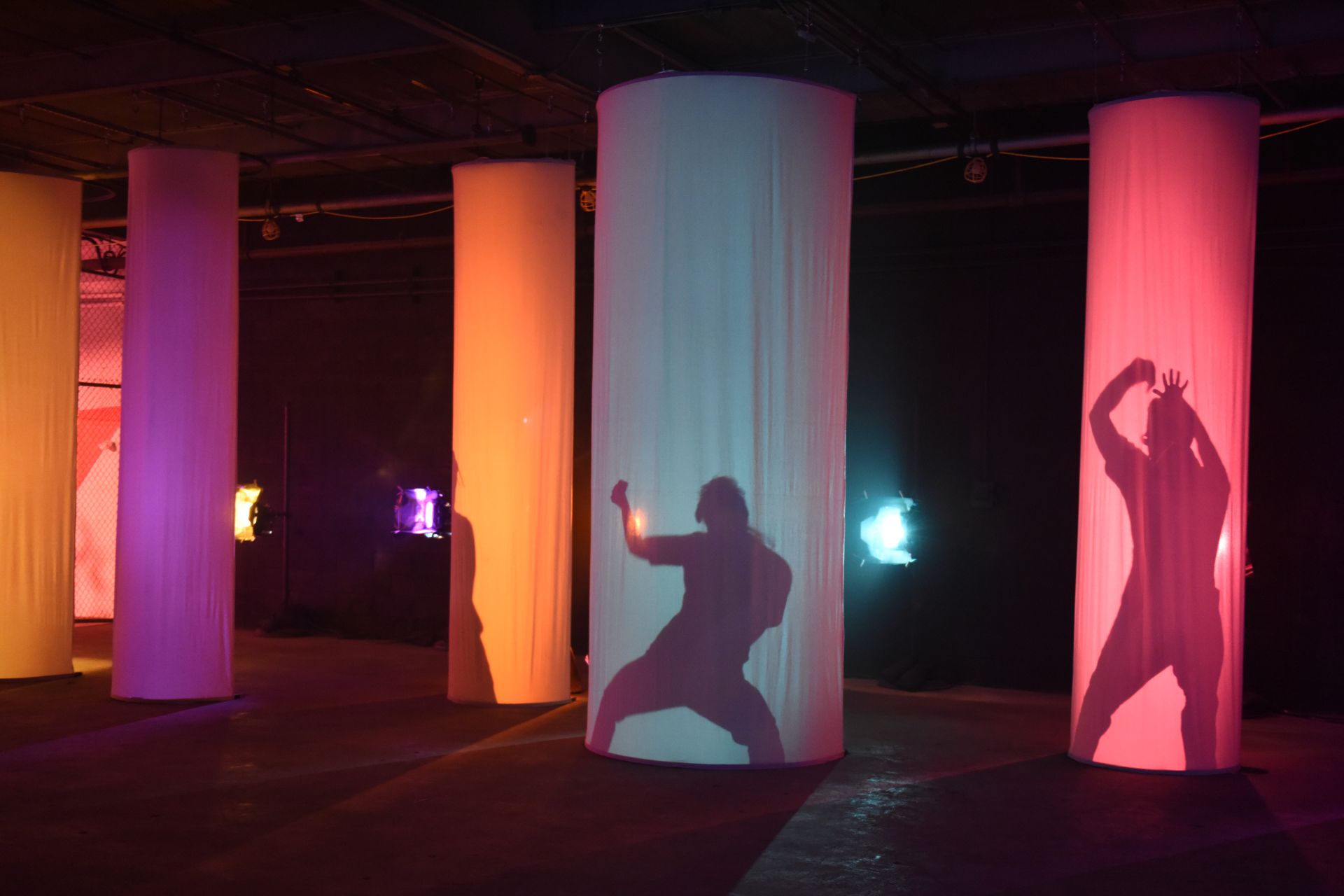 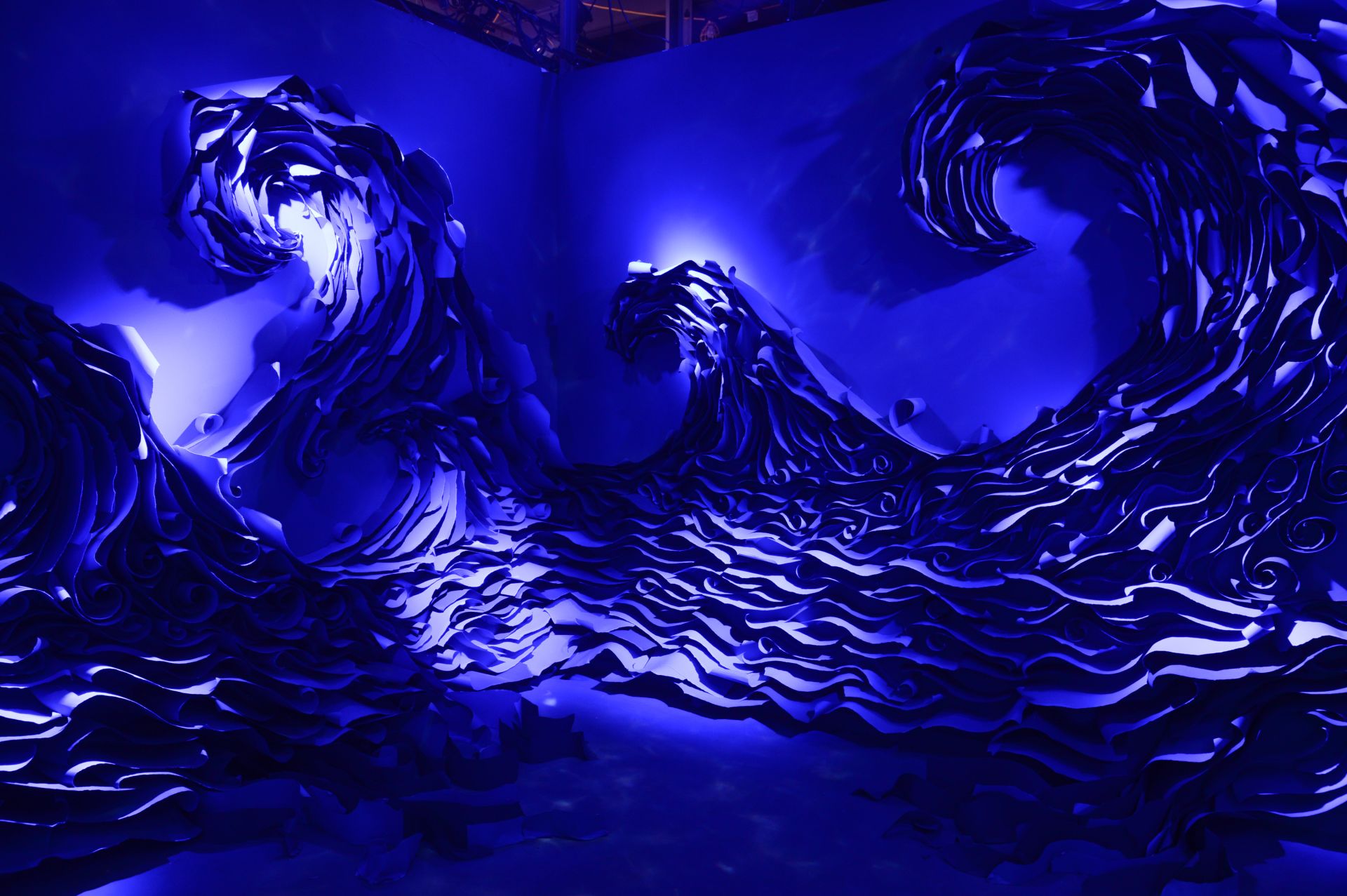 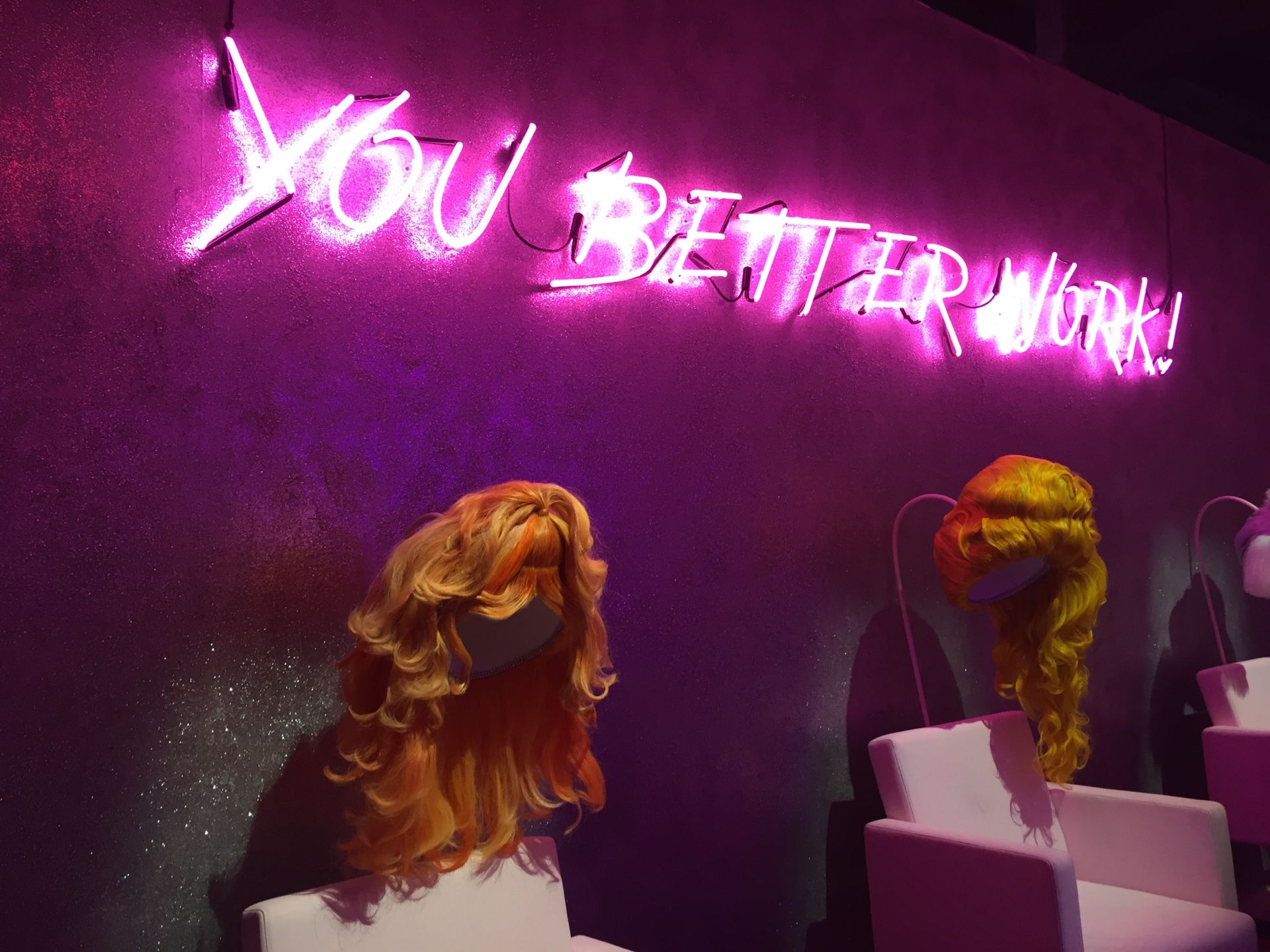 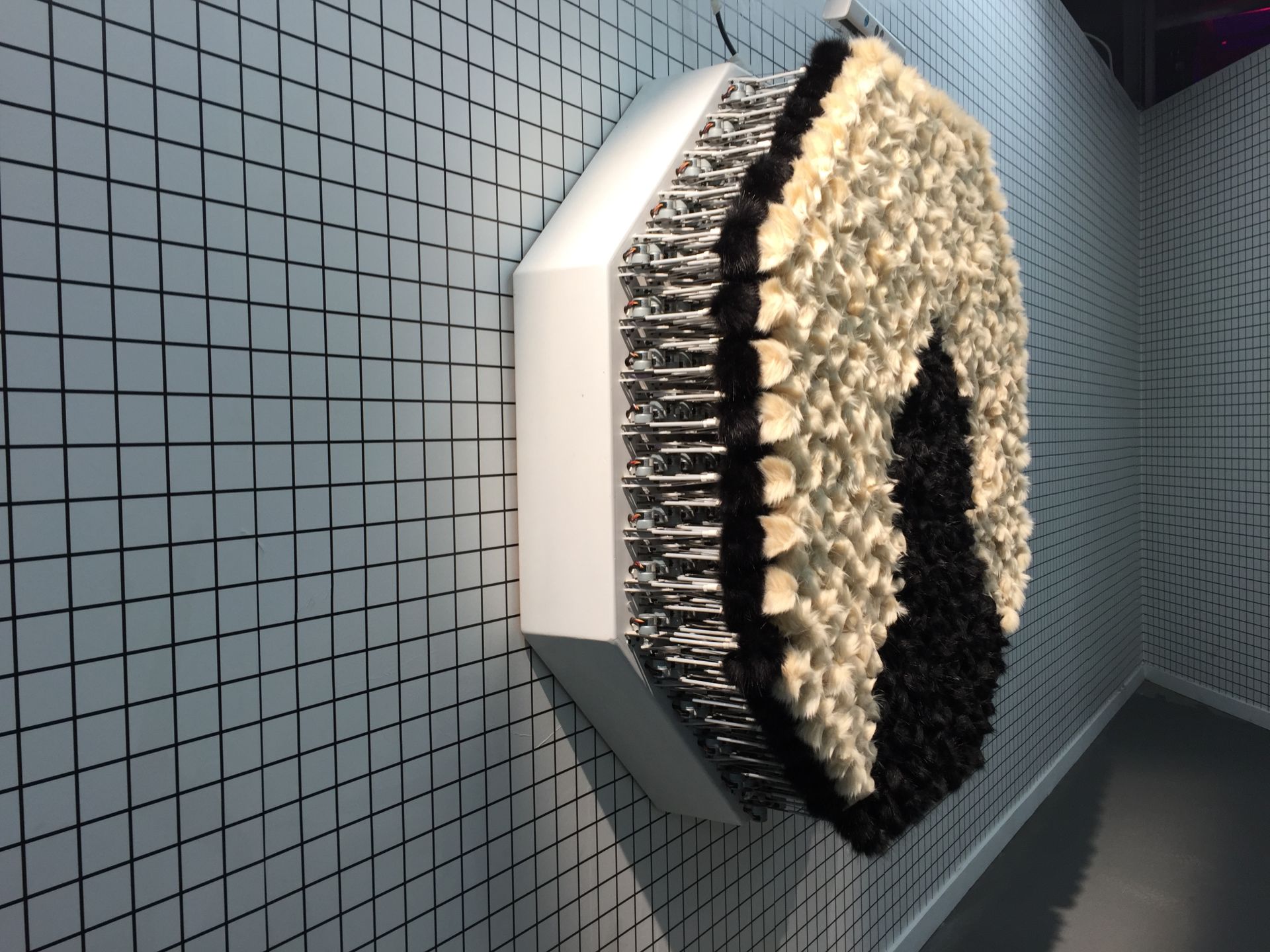 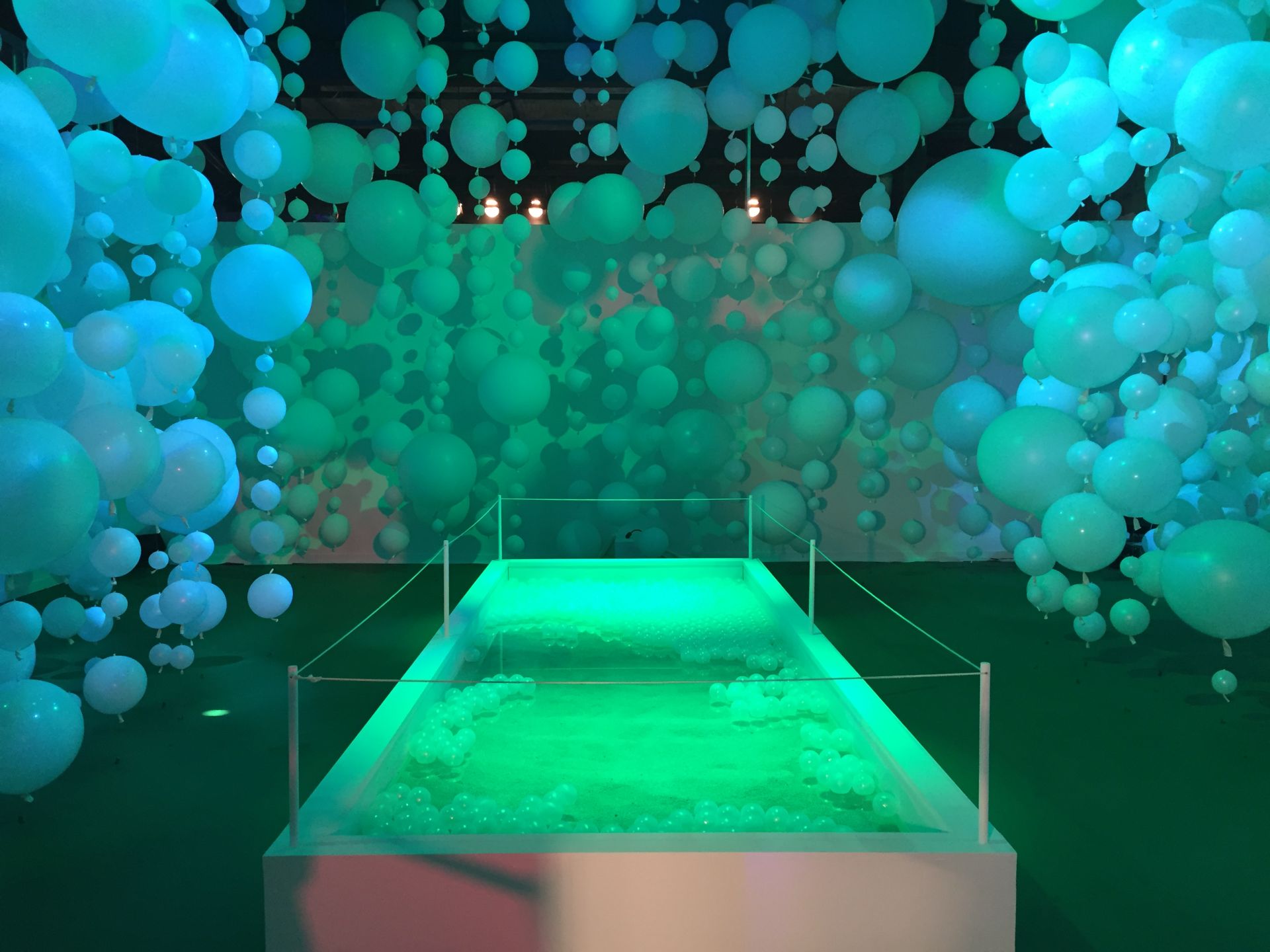 'Beyond the Bubbles' by Perrier.
Photo: Alanna Martinez 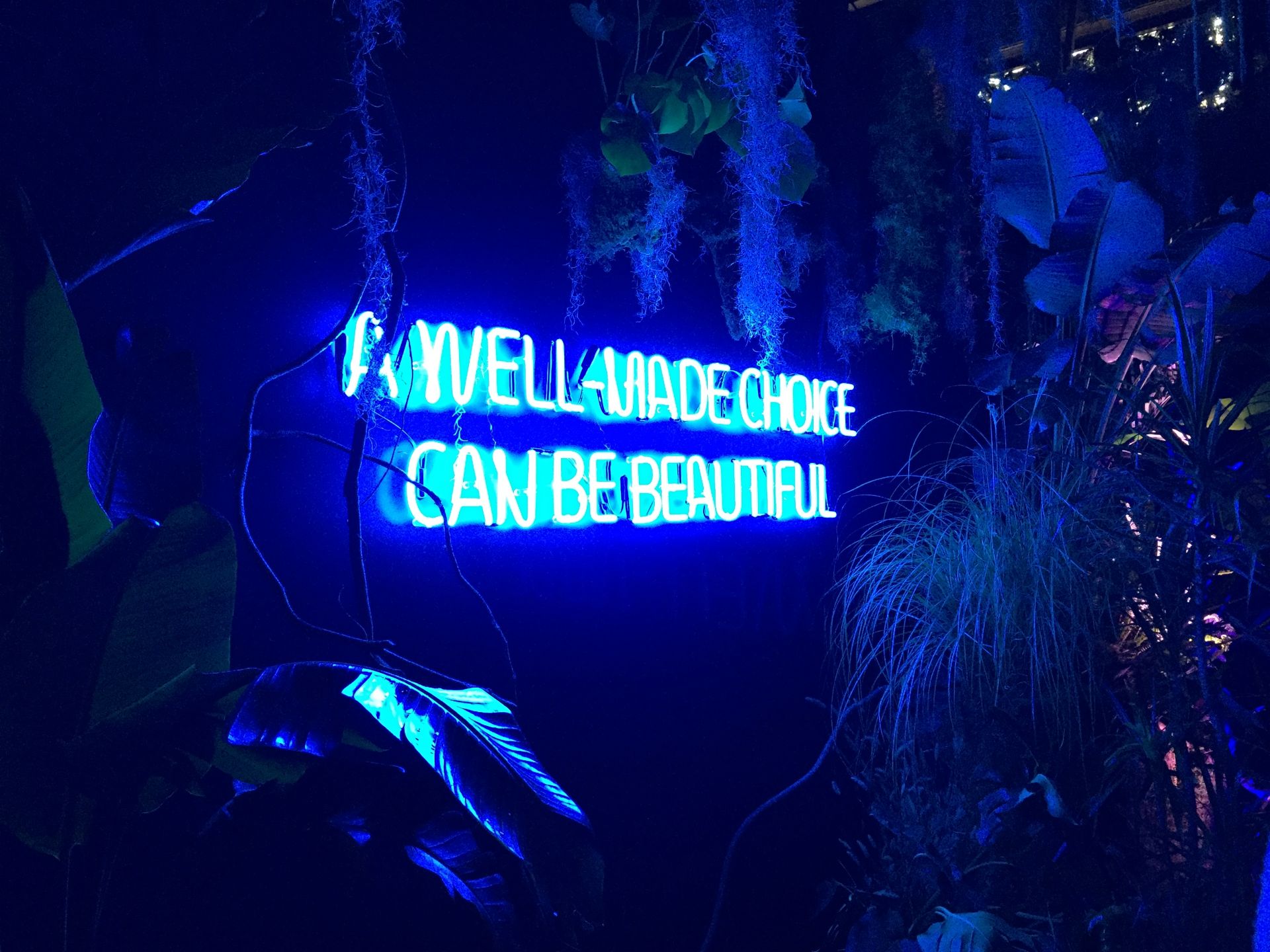 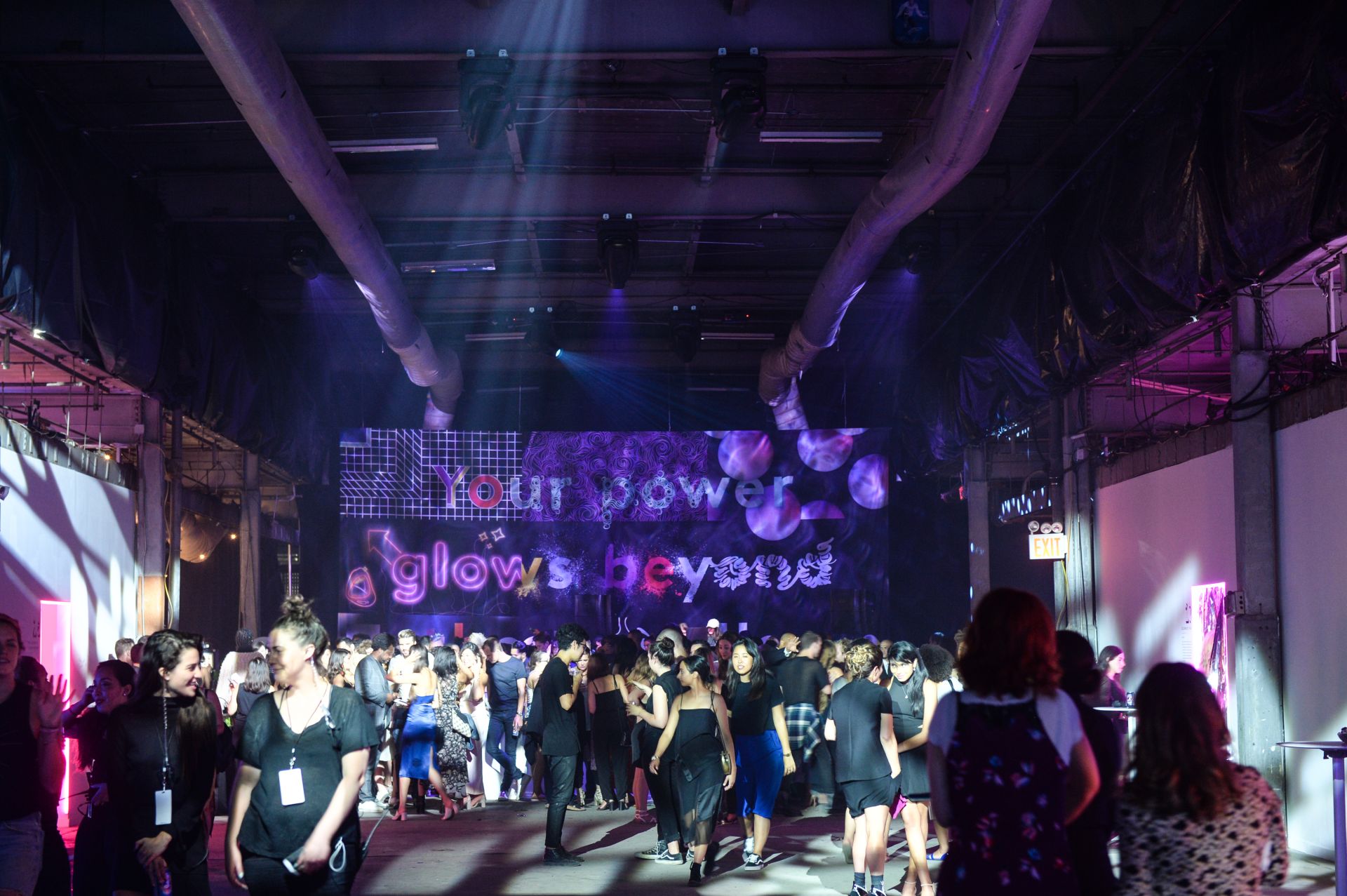 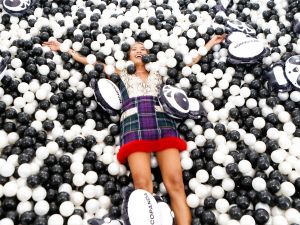 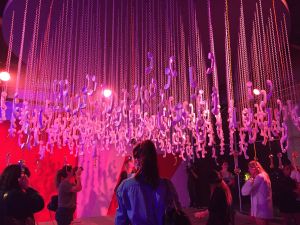 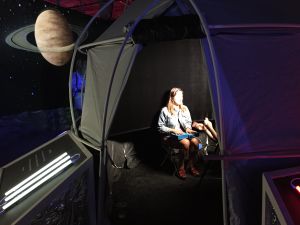 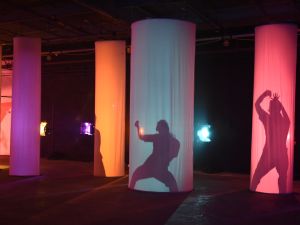 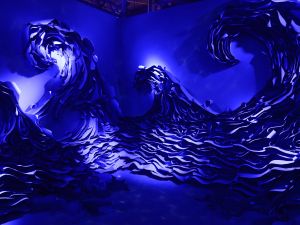 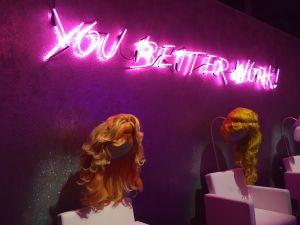 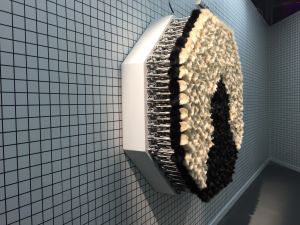 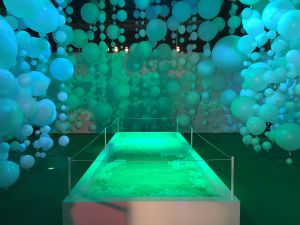 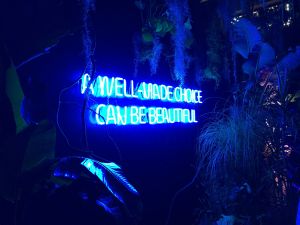 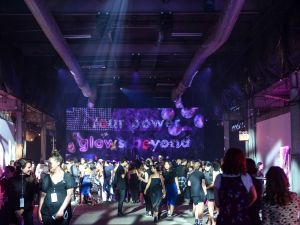 There’s a giant ball pit full of inflatable pandas in Brooklyn. If that’s not enough to make you cancel your previous weekend plans and head straight to Bushwick, then I don’t think we can be friends.

Your chance to experience as much joy as an adult human is capable of without actually holding a live baby animal comes courtesy of artist Nicola Formichetti’s site-specific installation Panda-Monium, one of 29 immersive environments created for Refinery29’s annual New York Fashion Week event, called—spoiler!—29Rooms.

Inside an 80,000-square-foot warehouse off the Morgan stop on the L, celebrities such as Cara Delevingne and RuPaul, artists Daniel Rozin and Tali Lennox, and brands like Perrier and Ford have joined forces to build a series of elaborate room-sized artworks for Refinery29’s ambitious “Style Funhouse,” as they’ve termed it. And pandas are just the tip of the iceberg for what visitors can expect to see.

“The whole experience is designed to be filmed, photographed, Snapchatted and Instagrammed,” said Refinery29’s creative director of experiential Albie Hueston. “It’s a party that you’re throwing for yourself.”

While not everyone will fall for 29Rooms’ peace and love vibes—the event’s vague, feel-good theme is “Powered by People”—there are near infinite possibilities for gorgeous selfies found around each corner, plus a chance to escape reality for an hour or two inside a tricked-out warehouse of fantastical art. This has got to be one of Fashion Week’s best parties.

Some have chosen to interpret the theme literally, such as musician and actress Tinashe and the creators of photography app PHHHOTO, who have partnered to create an interactive dance floor that lights up and projects flashes of images and color on the walls when its danced on.

Another installation that runs on human energy is You-Niverse by Radiant Human, a roving new-aged “aura photo” company by artist Christina Lonsdale. Visitors pose for a portrait by Lonsdale inside a Lunar Lander sculpture, which has been set down on a sandy planet somewhere in a galaxy far, far away, and outfitted with color stations to guide viewers gently through interpreting their auras.

Innovative technology is everywhere to be found. Google’s virtual reality painting program, Tilt Brush, is available for people to test drive in a blacklit, paint splattered room. And Rozin, whose kinetic sculptures have been shown in exhibitions all over the world, tracks viewers with motion sensors and captures their form in fluffy pompoms or on a pixelated screen.

Peppered in between prime selfie-spots—a halo of neon lights perhaps, or a salon chair where you can don one of RuPaul‘s iconic wigs—there are plenty of projects with a meaty social message. Turn the Tide, a room designed by actor Adrien Grenier and the Lonely Whale Foundation, features a soothing under -themed artwork comprised of paper waves, and encourages visitors to reduce their use of plastics in order to preserve the world’s oceans. Meanwhile, Lady Gaga’s Born This Way Foundation (headed up by the entertainer’s mother Cynthia Germanotta) asks visitors to scribble messages on the walls or record soundbites revealing stories of kindness.

At times, those messages of positivity and artistic intent get fuzzy. Art collective Chez Conversations have created a seductive satin-drenched, floral-scented room filled with cushions, a spherical bed and an overheard projection, titled Love Yourself. “It’s like when you’re asked to put an oxygen mask on yourself before helping others on an airplane,” one artist in the collective told press. “It’s important to have a little love for yourself before you can love those around you.” OK, but I don’t think that’s the point of the flight crew’s safety instructions.

And as its Fashion Week, product placement is  hardly absent from the fun, never mind how cleverly it may be concealed. Michael Kors, for instance, brought a runway to the event, along with a selection of newly designed handbags that visitors can borrow while they strut their stuff down a movie set-style street while a robot camera follows behind and snaps a picture. A freewheeling robot companion is more than enough cool to cancel out the ickiness of product placement.

Last year’s event drew over 6,000 visitors, and lines for the show grew so long that organizers had to close it early. This year, over 10,000 are expected to swing by one of the few free, public events of NYFW before doors close on Sunday. But rest assured, joy will be had by all: parked outside is a truck of rescue puppies to cuddle while you wait.