Depending on whom you ask, Washington D.C. is just a bus, train, or plane ride away. The cultural distance, however, can feel much longer—conversations overheard at bars, outfits glimpsed on public transit, and general attitudes toward bureaucracy / order vs. do-it-yourself free-for-alls are so different from in New York City, that they can at first be jarring.

A Lyft driver discussed with me all the CIA / FBI passengers he’s had (who all tell him they’re accountants). I sat next to two chatting women in a café. Instead of rehashing their most recent therapist appointments, I heard, “I know you can’t really talk a lot about what you do, but…”

It was refreshing, then, to enter the newly renovated and expanded East Building of the National Gallery and see masterpieces that transcended any petty differences between viewers. After three years of renovating old galleries and constructing new galleries and a roof terrace, the East Building will finally be open on September 30.

With over 12,250 square feet of new space conceived by Perry Chin (an associate of building architect I.M. Pei), the building necessitates some navigational forethought. “I was doing a little math,” said Curator of Modern Art Harry Cooper, “and I believe that the number of possible routes is twelve factorial, which is approximately 47 million.”

Cooper and his team just completed a rehanging of the permanent collection, including a gigantic exhibit of the work of Alexander Calder. Museum Director Earl A. Powell called it “the largest long-term exhibition, I believe it’s safe to say, in the world” of the sculptor’s work so far.

Cooper explained the choices for the permanent collection room by room: Picasso next to Toulouse-Lautrec, the story of Cubism, Monet, Fauvism, German Expressionism, the largest holdings of Rothko of any public collection… Cooper’s talk sounded like an art history lecture, if the session ended with its attendees able to see each of the discussed works in person. The new building also includes a black box for video, which Cooper called a “mini revolution” for the National Gallery. “It’s the first time in the permanent collection in the East Building that we’ve had a space to show film and video,” he said.

To celebrate, the museum is exhibiting two new acquisitions: Street by James Nares (a film of people moving in slow motion through Manhattan—perfect for the homesick New Yorker) and Rineke Dijkstra’s three-channel I See A Woman Crying. The museum just began collecting video. “I’d love to get eventually a historical collection,” Cooper said. “Really from the 70s, important works. Early works by Nauman and so on, all the way up to the present. Not a huge collection, but we’re the National Gallery, we want to have the best.”

Los Angeles to New York: Dwan Gallery, 1951 – 1971 celebrates gallerist Virgina Dwan, who has promised her personal collection to the National Gallery. Ed Kienholz’s iconic Back Seat Dodge ’38, which inspired controversy 1966 with its portrayal of two bodies entwined on the backset of a car, provides a cornerstone of the exhibition. Back when he was Director of LACMA, Powell noted, he purchased the work for that museum. A gallery dedicated to Dwan’s work with Michael Heizer and Robert Smithson introduces land art to the museum.

In the Tower: Barbara Kruger features the artist’s iconic prints: retro black and white photographic images overlaid with red bars and white text. “I’m incredibly honored to be showing my work at the National Gallery,” Kruger said, after the preview. “It’s an incredibly ambitious reinvention of the building, both architecturally and the installation of the work.”

A bit anticlimactically, Powell ended the preview with one final note about new changes. “We have a new caterer,” he said. “Starr Catering Group will launch their new menus and coffee service next Saturday.” As if feasting your eyes wasn’t enough. 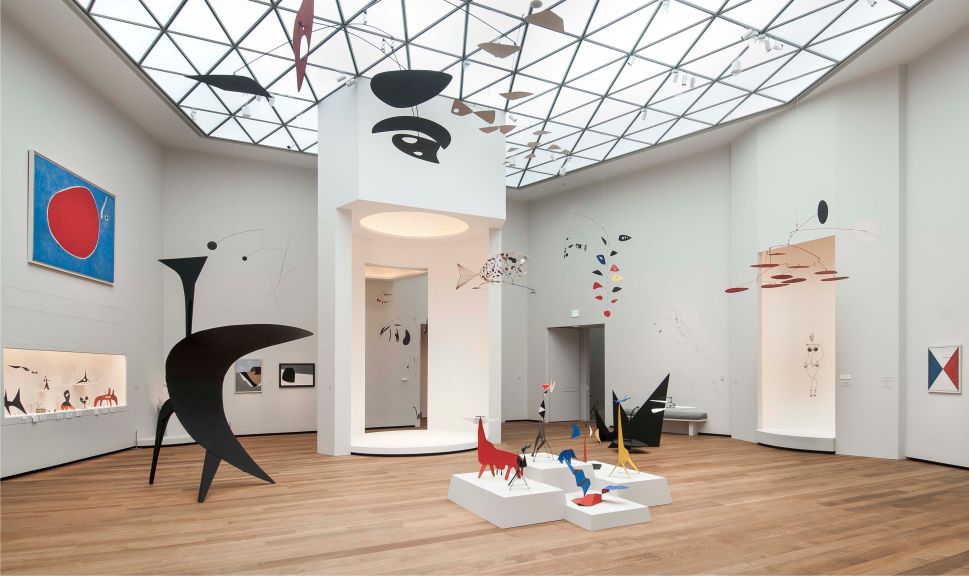